Alexandra Chando is an American actress, known for her role in the CBS soap opera As the World Turns and for her dual role as identical twins, Emma Becker, and Sutton Mercer in the drama series, The Lying Game. In addition, her other TV credits are The Neighborhood, Wisdom of the Crowd and The Vampire Diaries.

From her successful career, Chando has earned a huge amount of money. What is her net worth? Know more about Alexandra’s age, relationships, career, and net worth here.

Alexandra Chando was born on 28th July 1986, in Bethlehem, PA under the zodiac sign Leo. She is born to the father Steve Chando and mother Rebecca Chando.

Her father owns a commercial roofing company in Bethlehem known as CHM Contracting whereas her mother is a housewife. She spent her childhood along with her two older brothers Christopher Chando and Benjamin Chando.

To my Dad, who has always been a wonderful example of what a good husband and father should be…you’ve set the bar high. Happy Father’s Day. #daddysgirl

Chando graduated from Liberty High School and later she attended Manhattan College. Besides she also used to play at Community Theater at the age of 8 and continued performing in plays during high school.

Who Is Alexandra Chando Husband? Is She Married Or Dating?

Alexandra Chando is neither married nor dating. She seems to be single as of 2019. Back in 2011 on the occasion of Valentine’s day she tweeted:

“Perfect day with my amazing boyfriend”

However, Chando never revealed the identity of her boyfriend. Moreover, there was a rumor of Alexandra’s relationship with several men in the industry. She was once rumored to be dating her co-star, on-screen boyfriend Blair Redford in 2012. Alexandra and Blair together attended the red carpet in New York City, on 19th March 2012 at the ABC Family Upfront.

Although they seemed close to each other, they never mentioned whether they were actually dating or not. Likewise, in 2015 Alexender was spotted with actor Michael Trevino outside a grocery store. And the stories create a dating headline. 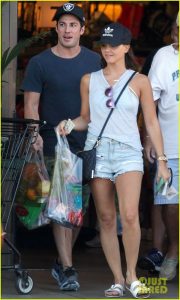 As a matter of fact, Alexandra and Michael also appeared in various events including a charity event. But, the couple did not confirm their relationship.

Alexandra made her acting debut in 2002 through the TV series House Blend portraying the role of Jenna Harper. After three years she played in the American TV soap opera that aired on CBS, As the World Turns as Maddie Coleman.

Later in 2009, Chando was cast in the American documentary TV series True life and further appeared in the TV series, Sherri. Moreover, she starred in two episodes of American comedy-drama TV series Glory Daze as Annabelle. In addition, her other TV show credits are Castle, Hindsight, Dead People and Outcast.

I had the pleasure of going to the premiere of #thegoodtimegirlsfilm last night and was incredibly inspired. @courtneydirects directorial debut was nothing short of awesome. @lauradern rounds out a strong female cast and with almost every crew member a woman, this film proves that more women need to be given opportunities to direct, produce, DP, operate camera and just RUN SHIT. The short is up now on @refinery29 's website. Do yourself a favor and check it out.

Besides her TV roles, Chando has also appeared in two movies including The Bleeding House as Gloria Smith / Blackbird and in Construction as Colleen. Chando surprisingly grabbed the opportunity to portray in the most-coveted fictional series, The Vampire Diaries where Nina Dobrev played a lead role.

The salary varies according to the experience of the stars. Chando is involved in the entertainment industry for long, thus she gets paid a salary in a good range and earns around $250000 annually.

Throughout her career, Alexandra has played in several movies and TV show. Besides her acting career, she is also a director from which she added extra money to her income.

Alexandra’s age is 32 years as of 2019. She stands at a height of 5 feet 2 inches and weighs around 106 lbs. Chando has a curved body shape. In addition, she has a pair of brown eyes and blonde hair. Furthermore, Chando’s body measurements are 30-23-30 inches.