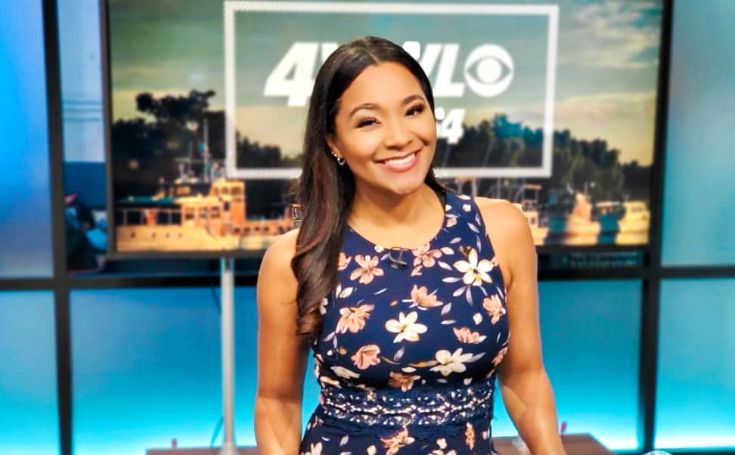 An American native, April Dupre is a certified fitness expert and instructor. Further, she is the founder of the wellness company named Footprints To Fitness.

Moreover, she is also a journalist who serves as a traffic reporter at WWLTV in New Orleans, Louisiana, for the Eyewitness Morning News. Since October 2017, the star has been part of the station since she was officially hired at the station.

April has over four years of experience in this station and earns an impressive salary, maintaining a lucrative net worth from her job.

Besides, she married her longtime partner, Jarrod. Does the couple have any kids? and How rich is the reporter as of 2022? To gather more content regarding these talented correspondents, stay connected with these tabloids until the end.

The talented and gorgeous Dupre was born and raised in Gentilly, New Orleans, USA, in September. However, she hasn’t revealed the precise details of her birth date and year in the media. The good-looking reporter has kept the clue regarding her birth date, siblings, and early life a bit secret.

Likewise, the lady is the daughter of Leatrice Dupre (mother) and her beloved husband, Rickey Dupre (father).

Similarly, the Footprints To Fitness owner April attended and completed her high school at St. Mary’s Dominican High School, situated in New Orleans, Louisiana. After that, she joined the University of New Orleans.

From there, the beautiful lady earned her Bachelor of Science degree in Exercise Psychology and also received a minor in psychology, human performance and health promotion psychology from the University of New Orleans.

Additionally, the star also trained in musical theatre and dance at the NOCCA Institute. As per her Linkedin profile, Dupre studied at Marian Central Catholic Middle School.

The fitness instructor, April, is in a marital relationship with his fiance-turned-husband Jarrod, her business partner. But, How and when they first met is still under review. But it seems like the twosome dated several months before exchanging their engagement rings.

Furthermore, the lovely couple tied their wedding knot in March 2019, at The Burgundy House, in front of their dearest ones. Further, their intimate wedding ceremony was planned and decoded by Nouvelle Fete Celebrations.

On that big day, the bride looked stunning in her sleeveless floor-length white bridal gown designed by Couture Bridal Collective, and her hair was set up by the hairstylist Michelle Newsham. Meanwhile, the groom dashes the look by wearing a black tuxedo.

Nowadays, the newly married couple is living blissfully and is sharing a strong bond. Besides, the lovebird visits many exotic places together and also never misses a chance to flaunt a romantic picture on their respective social media sites.

Besides, as declared, a certified fitness expert wasn’t linked in extra-marital affairs with any guys. Also, she hasn’t faced any controversies and scandals concerning her personal life and professional career.

Hence, Aprilhappily leads a marital life with her hubby and is busy with her work while focusing on her career.

Hopefully, we pray for her to stay high and live long without any signs of disease, plus find her dream man in the upcoming days.

How Much Does April Dupre Earn?

An American News reporter has maintained a lucrative fortune during her long professional career. The young lady journalist has an estimated net worth of around $500,000, including her assets, money, expenses, and income which is less than another WPLG Local 10 News reporter, Sanela Sabovic, who holds a $600,000 net worth.

Being a certified fitness instructor, April runs a wellness company, Footprints To Fitness. Also, she is a traffic journalist who works as a traffic reporter at WWL TV’s Eyewitness Morning News program. According to Payscale, a traffic reporter earns an average remuneration of $41333 per year.

Further, her main source of income is her career as a professional journalist. Through her other sources of income, Dupre has accumulated good fortune but prefers to lead a modest lifestyle.

Not to mention, the things which the star likes are meeting people from across the world and presenting their stories.

April has spent time interning at Chicago affiliates and ABC, wherever she served in special events and analysis of news planning.

Hence, there is no doubt that the female aristocrat relishes a lucrative life with such earnings.

Through her hard work and dedication towards her work over the years in the field, the News host has been able to live a sustainable lifestyle along with her family.

Beauty with the mind, Mrs. Jarrod previously worked as a Certified Fitness Instructor for six years and 11 months prior to joining her current station. Also, she is the founder of Footprints To Fitness, a wellness and health company that was founded in September 2014 with the sole goal of assisting people in living a fun and balanced life.

Similarly, she enjoys working out, traveling, and spending time with her friends and family in her spare time.

Likewise, the charming lady entered the New Orleans Saints, a dance crew, shortly after graduating from university and working as a dancer. After three years of dancing, the girl left to work as a Physical Education and Health Teacher in secondary school.

There, she served as a teacher for eight years and later began working as a Zumba Instructor in September 2011. Sofra; Dupre worked as a fitness instructor for nearly 20 years before acquiring her current job at WWL-TV.

Be With AllStarBio, For More Fascinating Biographies On Your Favourite Journalists and Reporters.