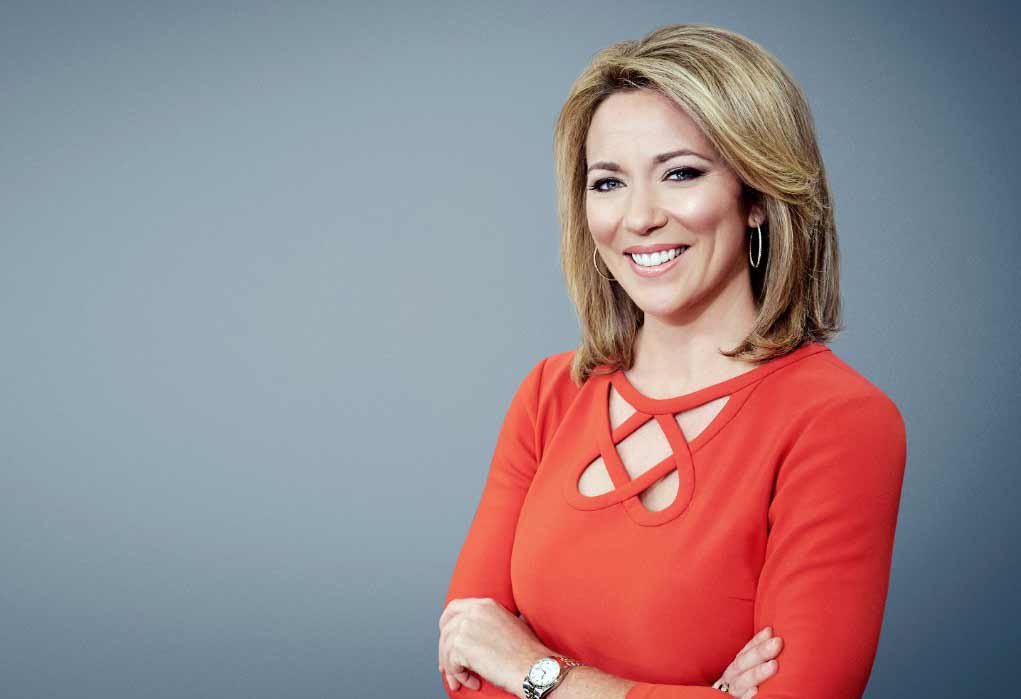 Furthermore, the beautiful journalist Baldwin is married to her longtime boyfriend turned husband, James Fletcher. Do the couple share any children together? Brooke has maintained her net worth to over a million dollars.

If you want to collect all the information regarding Brooke Baldwin’s personal and professional life, go through the whole article and read her bio until the end. Stay tuned with us.

Recalling her early life, Brooke Baldwin was born on July 12, 1979, in Atlanta, Georgia, the U.S. As of her birth date, Baldwin’s age is 39, 2019. However, she has not yet disclosed any information regarding her family, parents, and siblings. Baldwin enrolled at The Westminster Schools, a private college preparatory school.

Later, she graduated from the University of North Carolina at Chapel Hill with a degree in journalism and Spanish. Later, she studied at Universidad Iberoamericana in Mexico City during her undergraduate years.

Mrs. Baldwin started her Journalism career at WVIR-TV and became the morning anchor. She then joined the WTTG in Washington, D.C, serving as the lead reporter for the 10 pm newscast. After working on WVIR-TV and WTTG, Baldwin started working for the CNN News Network and anchoring CNN Newsroom with Brooke Baldwin from 2 pm to 4 pm ET.

Brooke has co-anchored CNN’s special coverage, Space Shuttle Atlantis (STS-135) from Kennedy Space Center and co-hosted the show Soundcheck. The show was of half an hour that deals with music, featuring the artists like Wilco, Mavis Staples, Mumford & Sons, Ben Sollee, and Janelle Monáe.

Besides anchoring and hosting, she has also appeared in a very short length of about 15 minutes romantic comedy film Drunkards for her role as a woman and in the two hours-long TV series CNN Saturday Morning. She has made a documentary named “To Catch a Killer,” which won a Silver World Medal for Best Investigative Report at the New York Festivals International Television & Film Awards.

Spreading some glimpse of light to her career, Baldwin is a married woman. She married her longtime boyfriend, James Fletcher, in May 2018. Their wedding ceremony was held on May 6, 2018, at the Hudson North of New York City. The duo married in front of their close friends and family. They were engaged in July 2017 after dating for several years.

Well, the couple met for the first time at a holiday party in 2015. Since then, the couple started dating each other. The duo got engaged during their trip to Hawaii.

Previously, Baldwin was allegedly married to veterinarian Jay David. But, it was false news. She even confirmed that some online sources randomly flashed the news. Her husband is a director and producer from London. He produces ad films and commercials for political campaigns.

Since then, the couple has been happy and spending quality time together. So far, there aren’t any signs of them getting divorced. She has admitted her happiness with her spouse exploring in an interview with a magazine which says:

“We were chilling on the beach. We love sunsets. It was simple. I didn’t want a big thing. He did well. All I wanted on my birthday was to be on a surfboard. I got a little bit more than that.”

Well, the pair shares a loyal relationship. And they will soon welcome their sweet children into the world. Besides, Brooke is fluent in English and Spanish. Her sexual orientation is straight.

Reviewing her physical appearance, Brooke has long, sexy legs and perfect body measurements with 36-27-36 inches and weights 67 kg or 148 lbs. She is 5 ft 7 inches tall with blue eyes and dark brown hair. She looks very sexy in tight skirts.

Brooke accumulates excellent earnings out of her profession as a journalist and a television presenter. According to some online sources, her net worth as of 2019 is estimated to be around $1.5 Million. Similarly, according to payscale, she makes an assumed salary of approximately $59,679 per annum.