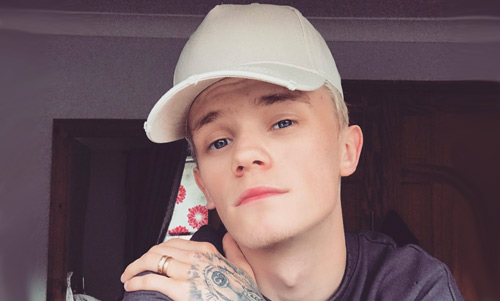 Charlie Lenehan is a British singer as well as a songwriter. Also, Charlie is famous as one-half of the Brtish pup duo Bars and Melody (B.A.M) along with partner Leondre Devries. With Bars and Melody (B.A.M), he and Leondre behold the place of the second runner-up in the talent hunt show Britain’s Got Talent in 2014.

The pop star, Charlie represents the “Melody” duo of Bars and Melody along with his bandmate, Leondre Devries, rapper. They competed on series 8 of Britain’s Got Talent, finishing in third place. To know more in details about Charlie’s personal life, earnings and net worth, read the full biography of Charlie Lenehan.

Charlie Lenehan is an English singer and also, a songwriter. He forms one-half of the popular pop-rap duo Bars and Melody (B.A.M, for short) with his stage partner, Leondre Devries, a rapper where Charlie representing the “Melody” and Leondre, as the “Bars.”

Charlie was born 27th of October 1998 in Frampton Cotterell. He lives in South Gloucestershire with his mother, a school cook, and his step-father is a businessman. Charlie also has a younger sister, Brooke and his mother, Karen James is a cook in Thornbury at Gillingstool and New Siblands schools.

Moreover, Charlie took up singing at the age of 11 when his schoolmates invited him to join a band. Moreover, he has been attending the Winterbourne International Academy since he was 11. Charlie was also interested in drama, music, and engineering at the time of the competition. He returned to school on the first day, after Britain’s Got Talent finale.

Inside Of Lenehan’s Musical Career

Talking about Charlie Lenehan’s profession, Charlie was just 16 years old when he started his musical career. He was also known for his singing talents at school and decided to take it further by posting his videos online. Later in 2013, Charlie first met Leondre, a fellow aspiring teen rapper on Facebook. They also collaborated to create a music duo, Bars and Melody (B.A.M).

Earlier in 2014, the duo auditioned for the 8th series of ‘Britain’s Got Talent’ where they performed a song based on Twista and Faith Evans’ Hope, replacing the original lyrics with their own verses, protesting against bullying. Their performance amazed the judge, Simon Cowell, so much that he pressed the golden buzzer, sending them straight to the live semifinals.

Later in 2015, They released their debut album, 143, which peaked at No. 4 on the UK Albums Chart. To promote the album, they toured across the UK, the Netherlands, and Poland. Soon their debut album went platinum. Some of their tours were in collaboration with fellow singers like Lukas Rieger and Kiera Weathers. In the following year, their album Teen Spirit, and their first Japanese album, Hopeful, were also released.

Moreover, their second Japanese album, Never Give Up, was released on February 2017. Along with their musical career, the duo also starred on several television shows, including The Ellen DeGeneres Show, Good Morning Britain, and This Morning. Charlie and Leondre are also budding entrepreneurs and selling official B.A.M merchandise, such as bags, hoodies, notepads, mugs, and T-shirts as well. The duo is extremely famous on social media and boasts of over 1.4 Million followers on their B.A.M YouTube channel.

Charlie Lenehan has maintained his net worth mainly from his charismatic singing career. He also earned whooping cash prize after securing the third position in the eight seasons of Britain’s Got Talents. Besides this, the duo earned a £500,000 record deal with Simon Cowell’s record label, Syco.

Furthermore, the duo released their first debut album 143 in 2015 and was ranked no 4 on the UK Albums Chart. Charlie has been harnessing his wealth from his famous YouTube Channel, Bars, and Melody. They also earn a decent amount from the B.A.M merchandise.

Their YouTube channel has amassed nearly three million subscribers. As per socialblade, they earn up to $26.1k monthly and $313.6k yearly revenues. As of now, they are preparing for the tour to Germany, Switzerland, Austria, which will be held at the start of March 2019.

Coming up to Charlie Lenehan’s personal life, Charlie is in a romantic relationship with Chloe Lindsay, an Instagram star from 2015. His girlfriend has more than thousands of followers on her Instagram account. The pair shared many wonderful times together and often shared their pictures on social media as well.

Unfortunately, the couple parted their ways marking the end of their romantic affair after two years of relationship in 2017. They never talked about their beak up story. After breaking up with Chloe, Charlie moved on with his life and focused on his career. However, he has now found the true love of his life, a 20-years-old beauty, Ana Lisa.

On the 8th of July 2017, Charlie’s girlfriend shared a picture with him for the first time on Instagram. Meanwhile, in 29th of July 2018, Ana gave a glimpse of her love life by sharing a cozy shot hugging her boyfriend.

Recently, on 23 September 2018, Lenehan shared a selfie with his girlfriend, Ana where his lady love is seen kissing him on his cheek. Hence, the love birds are in a romantic relationship and love sharing their romantic love life with their fans.