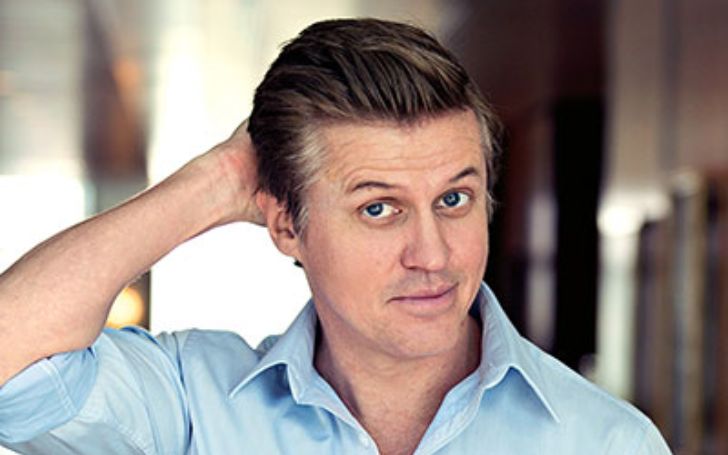 Daniel Wyllie mainly works in theatre; he spans over two decades in the field, appearing in numerous performances.

Mostly, the theatre actor performs with the Sydney Company, Company B Belvoir. He has appeared in plays like The Pillowman, The Lieutenant of Inishmore.

However, Wyllie is mostly known for creating the role of Fish Lamb in the landmark production of Cloudstreet, which toured both nationally and internationally.

In addition, Daniel Wyllie has received awards such as a Silver Logie for “Most Outstanding Actor in a Drama Series” in 2004 for his role of Charlie Jackson. He has also received Australian Film Institute Awards nominations in 2005, 2006 and 2007.

How rich is Daniel Wyllie? Know his networth!

Born and raised in Sydney’s North Shore, Daniel Wyllie is a 52-year-old Australian stage, film and television actor. He has been active in the film industry since 1990.

The actor has gathered a hefty sum through his acting career. His estimated networth is over $3 million.

Furthermore, Wyllie began his acting career in theatre. He has been acting in theatre for over two decades. His notable stage works are The Lieutenant of Inishmore, The Pillowman, and creating the role of Fish Lamb in the landmark production of Cloudstreet.

The actor had his first major role in the 1992 film Spotswood. Then, he played neo-Nazi skinhead Cackles in Romper Stomper in 1992. Daniel is also famous for appearing in the almost Long take, a video clip for The Sleepy Jackson Good Dancers in 2003.

Daniel has 34 films, and 33 Tv series credits under his belts as of 2022. His recent Television works include Wakefield, Romper Stomper, Blue Murder: Killer Cop, Offspring, Secret City, and No Activity. Besides, the Australian actor is well known for his role of Roger Knight in Puberty Blues and The Straits as Jojo.

Likewise, in 2016 Foxtel’s political thriller, Secret City as Mal Paxton, a minister in the Australian Government. Also, in the 2021 Wakefield as James Matos, a businessman who continues to negotiate a property deal while a patient.

Who is Daniel Wyllie’s Wife?

Daniel Wyllie’s wife is Shannon Murphy, an Australian film and television director. Shannon was nominated for 3 Emmy Awards on her episode of Killing Eve Are You From Pinner?

Besides, Shannon was also nominated for the BAFTA Award for Best Director in 2021 for her work on Babyteeth.

She won the AACTA Award for Best Director on Babyteeth. Babyteeth won 9 AACTA awards, including all the film acting categories, Best Screenplay and Best Film.

Daniel Wyllie and Shannon were in a relationship for six years before marrying. Shannon and Daniel tied the knot in December 2014 in a low-key ceremony at Anantara Bophut Resort & Spa on tropical Koh Sumai, Thailand. It is known that the couple has one child.

However, it is unclear if Daniel Wyllie and Shannon are together because, in 2021, Shannon Murphy filed the case of being assaulted by Wyllie.

Moreover, She had given pictures and a detailed statement of her alleged injuries in court documents. Niel Wyllie was found not guilty of assaulting his wife, Shannon.