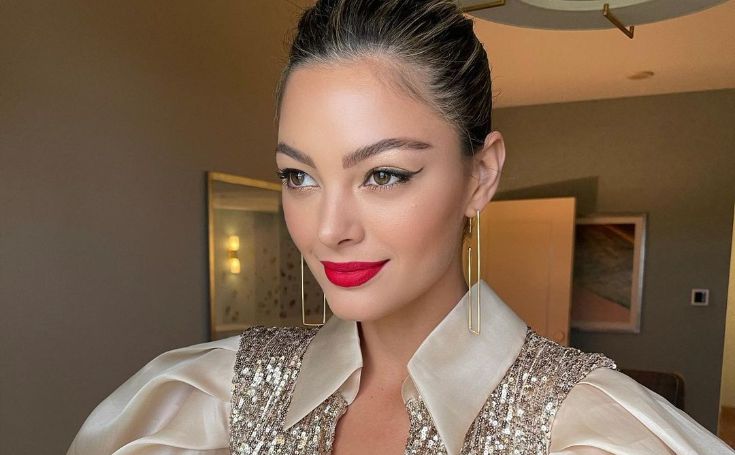 “If you trust in something enough, you will always find a way to make it work.” That is what Demi-Leigh Nel-Peters strongly believes.

You may recognize her as the wife of Tim Tebow, an American professional baseball outfielder in the New York Mets organization and but 34 years old former professional quarterback has made worldwide headlines for his achievements.

Furthermore, Demi is one of the most gifted South African models, entrepreneurs, and beauty pageant winners who won Miss South Africa’s titles and was crowned Miss Universe in 2017.

Also, she is the second Miss Universe winner from South Africa, following Margaret Gardiner, who was Miss Universe in the year 1978. Read all the articles to learn everything related to the star.

The stunning model was born on the 28th of June 1995 in Sedgefield, Western Cape, under the zodiac sign of Cancer. Likewise, she holds South African nationality and belongs to mixed ethnicity.

And she was raised by her mother, Anne-Marie Steenkamp, and her father, Bennie Peters. Wistfully, her parents divorced for their issues.

After divorce, her mother married Johan Steenekamp, and her father married Elizabeth Peters. And, she had a half-sister, namely Franje, who sadly died on the 4th of May 2019 because of cerebellar agenesis.

Revealing her educational journey, he attended North-West University and graduated in March 2017, gaining a degree in Business Management and Entrepreneurship.

This was just a few days before winning the title of Miss South Africa in the year 2017. Also, Leigh can fluently speak both English and Afrikaans.

Journey to the Success

As mentioned above, Demi-Leigh participated and won the Miss South Africa pageant on the 26th of March, 2017. After winning the national title, she represented her hometown Western Cape in Miss World and Miss Universe in 2017.

After this, she competed for Miss Universe, held in Las Vegas, Nevada, as these two international pageantries coincided.

On the 27th of November, 2017, she also won the competition and was crowned by the previous Miss Universe of 2016, Iris Mittenaere. As a result, she became the 2nd Miss Universe titleholder from South Africa after Margaret Gardiner.

During her reign, she traveled to many countries like Thailand, the Philippines, Indonesia, Lebanon, France, India, Mexico two times, the US, and many more.

Despite being Miss South Africa, Nel was kidnapped at Hyde Park, only a month after her crowning. Although she handed over her car keys to the carjacker and they forced her into the car.

Thankfully, she punched one attacker in his throat and successfully ran away to get help. And, she has revealed about this incident and expressed how no one stopped to help her except a young girl.

This incident motivated her to have self-defense workshops to help as many women as possible, as shared during a segment at Miss Universe.

Tim Tebow’s real name is Timothy Richard Tebow was born on the 14th of August, 1987, in Makati City, Philippines, to parents Pamela Elaine and Robert Ramsey Tebow. After his college, Tebow signed a contract with the Denver Broncos for five years.

Aside from the Denver Broncos, he played for the New York Jets, New England Patriots, and the Philadelphia Eagles as a free agent.

In addition to this, he signed a contract with the New Mets and participated in the Met’s instructional league in 2016. During his career at Denver Broncos, he gained his nickname as Mile High Messiah.

Besides, he is the winner of the 2007 Heisman Trophy Award. Not only this but also the idolater has won numerous accolades and awards throughout his long professional career.

Who is Miss Universe’s lucky boyfriend?

The 26 years old glamorous lady is a happily married woman. She tied her wedding knot to Tim Tebow after meeting him for the first time in 2018 at a Night to Shine event.

The baseball player proposed to her in Florida. Later, the lovebird exchanged their wedding vows on the 9th of January, 2019, in front of their friends and family at her lover’s family farm in Jacksonville, Florida. Additionally, the ring was a 7.25-carat solitaire.

Her husband brought Nel-Peters’ family and closest friends from South Africa to Florida to witness the engagement. Also, his parents, siblings, and friends were on hand for the exciting moment.

In a press conference with ESPN, her beloved fiance Tebow stated:

“I don’t wasnt to be single; I’m ready to steady and start a family, I want to have kids. I have so many things I want. No one will be happier than me when I finally find the right person.”

So, when is the lovebird’s marriage date? Are they planning something spectacular? Well, in an interview, Tim revealed that the duo is preparing for a destination wedding.

Later on, the romantic couple got into a marital relationship on the 20th of January, 2020, in Franschhoek, La Paris Estate, South Africa.

The bride wore a sleeveless, white crepe gown, and Kelly Jayne Cakes ten-tiers made their cake.

How much is Demi-Leigh Nel-Peters Net Worth?

The 5 ft 7 inches tall, the former Miss Universe has an astounding amount throughout her long professional career.

Agreeing to some online sources, she has an estimated net worth of around $5 million as of 2021. However, her salary from her career is not disclosed.

Also, she has endorsed several brands, like Gert-Johan Coetzee, Swarovski, PrettyLittleThing, Muca Skincare, God’s Love We Deliver, and many more. From this, she also adds some fruitful cash to her bank accounts.

Her husband, Tim Tebow’s Net Worth and Income,

Talking about her partner, Tim Tebow, has a net worth of over $13million and earns a good salary, maintaining an excellent net worth out of his profession. And, he received nearly $10million from the 2010-2012 season throughout his professional football career.

Besides, he also earns an additional income from his broadcasting and filmmaking career, with several endorsement deals.

Also, he signed an agreement with the Broncos for up to $33million over the summer of 2010. As per the report of 2016, Tebow signed an endorsement deal with Nike worth $300,000per year.

Her husband has two luxurious mansions under his name. He first purchased a larger brick home in 2014 on a golf course in Florida, for which he paid $1.4Million for the 6,525 sq. ft golf estate.

And, another in 2019, he paid $3million to scoop up an 8,100 sq ft mansion in a private community in South Jacksonville. The new villa initially landed on the market for $3.5million.

Hence, she lives a satisfying and lavish life with her husband.

Stay tuned with AllStarBio for more exciting content on Models and Entrepreneurs.