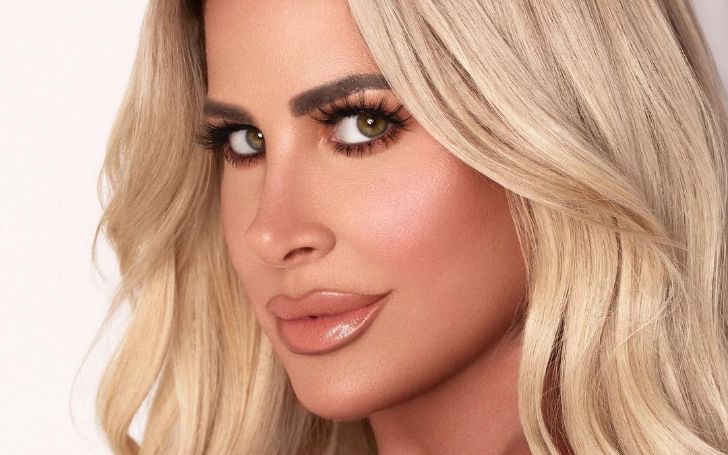 Kim Zolciak-Biermann is an American TV Personality. Kim appeared on the five-season reality show(RHOA) ‘The Real Housewives of Atlanta.’ RHOA is an American reality television series that premiered on October 7, 2008, on Bravo.

The Real Housewives of Atlanta has garnered mixed reviews from critics. Moreover, it is dubbed a guilty pleasure by several media sources. However, the show is chastised for appearing to manufacture elements of its plot.

Since the show’s third season in 2010, it has headlined Bravo’s Sunday night programs. It was eventually becoming Bravo’s highest-rated program by 2014.

RHOA star Kim is much more than just a TV Personality. Further, continue learning this Quick bio till the end to know every bit of detail about Kim Zolciak-Biermann.

Kim Zolciak was born on May 19, 1978, to a military family in Pensacola, Florida. She grew up in Windsor Locks, Connecticut. Her parents are Karen and Joseph. She has a brother, Michael. Kim belongs to Polish and Italian ancestry.

Besides being an American TV Personality, Kim Zolciak is a brilliant singer and, most importantly, mother & wife.

She released her album Tardy for the Party – THE REMIXES in 2010, Google Me and Love me first in 2012. The singer also featured in her own Bravo spinoff, Don’t Be Tardy for the Wedding.

A career in Reality Television series.

Don’t Be Tardy portrays Kim Zolciak, her husband, Kroy Biermann, and their family’s daily lives. It aired on Bravo on April 26, 2012, as Don’t Be Tardy for the Wedding.

It was the first spinoff of The Real Housewives of Atlanta. Sadly, Don’t Be Tardy was canceled after eight seasons in May 2021.

There are altogether eight seasons and 83 lists of episodes. The first season, Don’t Be Tardy for the Wedding, featured the couple as they planned their wedding and the day itself. Firstly, the series renewed for a second season in November 2012, and it was renamed to its current title.

Secondly, the second season premiered on April 16, 2013. It follows Zolciak as she moves on from The Real Housewives of Atlanta, cares for her family, builds her dream home, and manages to live out of the couple’s townhouse with their growing family.

Furthermore, Don’t Be Tardy renewed for a third season by Bravo in April 2014, and it premiered on July 17, 2014. Kim and Kroy’s twins and their two teenagers featured in the third season.

The show revived and premiered for a fifth season on September 14, 2016. They again renewed the series for a sixth season in April 2017, which started on October 6, 2017.

Beautiful Kim is married to the most incredible man Kroy Biermann. Kroy is a former American football defensive end and outside linebacker. The pair tied the knot on November 11, 2011.

Biermann and Zolciak began dating, and three months later, Zolciak became pregnant with their first child together. She gave birth to son Kroy Jagger Biermann Jr. on May 31, 2011.

Explicitly, Tv star Kim has two gorgeous daughters from her prior relationship. They are Brielle Karenna, born in 1997, and Ariana Lenee, born in 1998. The girls’ father filed to adopt them in March 2013.

The adoption was finalized in July 2013, and the girls’ last names were changed to Brielle Biermann and Ariana Biermann.

Kim announced on Twitter on March 20, 2012, that she and Kroy were expecting their second child together. They had a son on August 15 and was named Kash Kade Biermann.

Just after one year, the pair again revealed they were expecting twins. Likewise, On November 25, 2013, Zolciak announced the birth of her twins. The twins are the couple’s third and fourth babies and Zolciak’s fifth and sixth.

How rich is Kim Zolciak-Biermann ?

Kim Zolciak has become a great star on Bravo over the years, first on The Real Housewives of Atlanta and later on her spinoff show, Don’t Be Tardy. Bravo star Kim is living a lavish life with her husband and six children. Precisely, She holds a networth of $3 Million.

Biermann, on the other hand, has a net worth of approximately $5.5 million. This adds out to a net worth of around $8.5 million for the family as a whole. Kroy garnered this enormous amount as a professional football player.

Unquestionably, Kim Zolciak Made big money from her Entertainment career. She certainly made a fortune from her appearances on The Real Housewives of Atlanta and her spinoff show.

Kim’s Other Sources of Income

Kim Zolciak Launched a Swimwear Collection. Zolciak is a successful businesswoman besides being a reality TV star.

Over the last summer, Zolciak launched her Salty K Swim swimwear line, which appears to be doing well so far, since she reported on Instagram that her second collection sold out in less than an hour.

Many of Zolciak’s bathing costumes sell for roughly $90 on their website, so the line is clearly profitable for her.

Kim Zolciak Now Has Her Own Cosmetics Line. Aside from her swimsuit business, Zolciak owns a KAB Cosmetics company, which she founded alongside her daughters Ariana and Brielle.

Lip kits, lipsticks, and lip oils are among the products in Zolciak’s cosmetic range. Above all, She also earns quite well from endorsements and promotions.