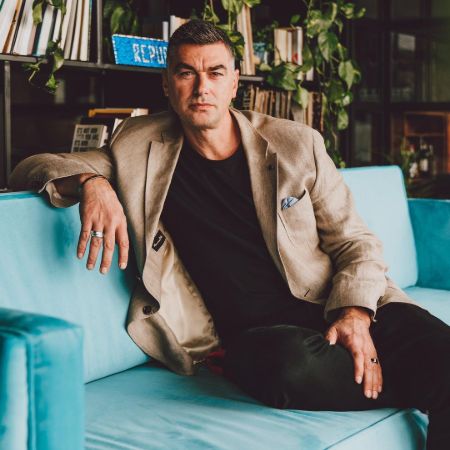 Furthermore, he came to the spotlight as the father of Grammy Awards-winning pop singer and songwriter Dua Lipa.

From his successful career, he has amassed an impressive sum of money. Read all the articles to know all the details regarding Dukagjin.

Dukagjin was born on 5 March 1969, in Pristina, SFR Yugoslavia, under the birth sign of Pisces. Likewise, he holds Kosovar citizenship, whereas his ethnicity is Albanian. And he follows the Muslim religion.

Similarly, he was raised by his parents, Seit Lipa, a historian and the head of the Kosova Institute of History, and his mother was an entrepreneur.

Sadly, Seit passed away in 1999 when the Kosova war had ended because of a heart attack. And Dukagjin couldn’t go back to see his dad due to the closed border. He was in London as a refuge.

Also, he enrolled at the Chartered Institute of Marketing and earned a degree of a professional diploma in Marketing and Advertising.

Dua Lipa’s father is a former singer in a Kosova rock band named Oda and the founder and CEO of Republika Communications Agency. In 2018 he managed an international music festival called Sunny Hill Festival and her daughter, Dua.

Before, he starred as an advertising coordinator at Mean Fiddler PLC in July 1999for four years and nine months. Moreover, he founded a media company named DMedia Production in May 2004, where he worked as an account director in the form for one year.

Indeed, he has served as a creative marketing director in many organizations like Ipko Net, Ipko Telecommunications, etc. From March 2018 to January 2020, Farther was featured as Strategic Development Advisor at Hyperloop Transportation Technologies, Inc.

Fifty-two years old, the businessperson is happily living a marital life with his beloved wife Anesa Lipa, a well-named entrepreneur & who works with tourism.

The romantic couple got married in the year 1995. Nonetheless, he has not shared his dating history or love life with the public yet.

The duo is blessed with three adorable kids. Their eldest child is a daughter named Dua Lipa, born on 22 August 1995, and after six years, he became the father of his second daughter Rina Lipa on 14 May 2001.

Then, her darling wife gave birth to their third child, Gjin Lipa, on 30 December 2005. As of now, he is living joyfully with his family in London.

The Kosovar entrepreneur has a huge net worth of around $1 million as 2021.

He has made such a hefty amount of money through his multi-professional career as a businessman, social media influencer, philanthropist, investor, and entrepreneur.

Also, he makes more money from his media company.

On the other hand, his daughter Dua Lipa has an estimated net worth of $25 million from her singing career.

Hence, with such income, he has a lavish life. Also, you can read more on Samiel Asgedom, Jacob Busch, John Schnatter, and many more.