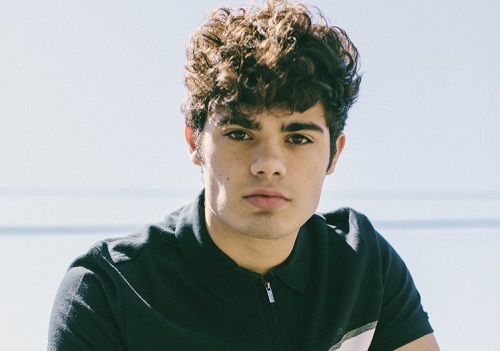 Emery Kelly is an Amerinca pop star as well as an actor. He is known for participating on the reality competition The X Factor in 2013. Moreover, he is also a member of a trio group Forever in Your Mind alongside Ricky Garcia and Jon Klaasen. In addition, Kelly also played the main role in the Netflix series Alexa & Katie.

At the current moment, Kelly is single and he is focusing on his career. His net worth is estimated to be around $1 Million as of 2019.

Emery Kelly was born as Emery Mikel Thomas Kell on 28th December 1997 in New York City under the birth sign Capricorn. He is the son of Joanna Kelly (mother) whereas his father’s details are unknown to the media. Furter, Kelly grew up along with his sister Veronica Kelly who featured with him in a siblings tag video on YouTube.

In addition, Emery graduated from high school in his home town. Moreover, the handsome star is a passionate gamer and a proficient in skateboarding and windsurfing.

Who Is Emery Kelly’s Girlfriend? Know About His Relationship

The 21 years old Emery Kelly is single as of 2019. However, previously he was in a romantic relationship with an American actress, Bailee Madison. The former couple began dating each other back in May 2015 but after being together for six months their relationship became bitter and they separated in November of the same year.

In February 2016, Emery stated about their break up with Teen.com:

It was hard because it was my first thing in the limelight; everyone saw it. I didn’t know at the time what it was, and then when things started happening personally that I couldn’t necessarily talk about, everyone started to form their own opinion.

Moreover, after splitting with Emery, his girlfriend Madison dated Alex Lange, an American model from 2016 to 2018. After that, the beautiful actress began dating Blake Richardson. As of now, the girlfriend and boyfriend share a loving relationship with each other.

On the other hand, Emery is enjoying his singlehood and remains focused on his music and acting career since his split from Bailee.

Though Emery is single as of 2019, he shares several photos of his co-stars and his female friends on his social media account.

Emery Kelly’s net worth is around $1 Million as of 2019. The main source of his income is from his profession as an actor and also as a singer. As an actor, Kelly played on the season 3 of the reality series The X Factor where the judge was Simon Cowell, Demi Lovato, Kelly Rowland, and Paulina Rubio.

Moreover, Emery is also a member of a group Forever in Your Mind alongside Ricky Garcia and Jon Klaasen. The band released their first music video She Lights the World in November 2013. Later in 2014, Jon lefter the group and Emery became the trio member where they released several singles and EPs. Some of his songs are Enough About Me, X Did, Compass and Dirty Laundry.

Apart from acting, Emery also has some acting credits. He featured in the TV series lab rats as Logan in two episodes and also starred in You’re Not My Sister Anymore of the TV series Dog with a Blog. Likewise, he has also appeared in the film Reach.

In addition, Emery also adds some amount of money from the combined YouTube channel named Forever In Your Mind. The channel has 5,837,775 video views and 94,741 subscribers. According to Social Blade, the channel makes monthly earnings in between $6 – $92 and annual earnings of $69 – $1.1K. Further, Kelly’s net worth will definitely increase in the upcoming days.
Alexa & Katie Amerinca actor Amerinca pop star Emery Kelly Forever in Your Mind The X Factor