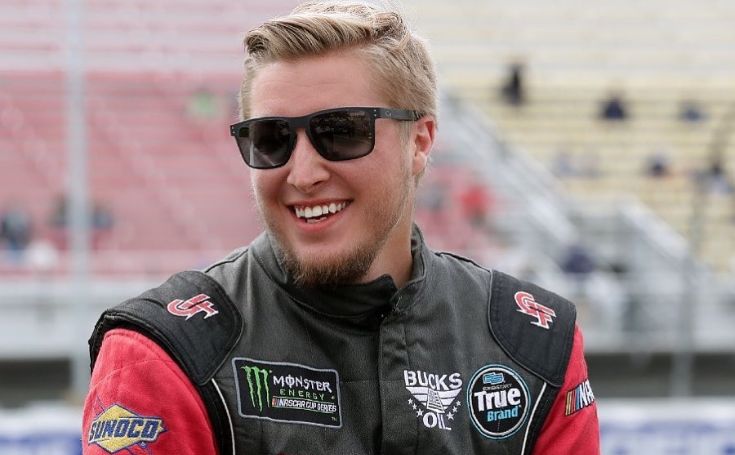 Garett Smithley is a well-recognized, professional stock car racing driver from the United States who has been driving the No.13 Ford Mustang for MBM Motorsports in the NASCAR Cup Series part-time.

Moreover, he races in the NASCAR Xfinity Series for Rick Ware Racing, and he is still waiting to win his first professional event. To know all the information regarding his personal as well as professional life. Read the article below:

Who is Garrett Smithley? His Bio.

Garrett’s full name is Garrett K. Smithley hails from Ligonier, Pennsylvania, on April 27, 1992, under the birth sign of Taurus.

And, the racer rose to stardom because of his brilliant career; as a result, we know only little about his parents and early life that his father and grandfather were military personnel.

As per nationality, he is an American citizenship holder and belongs to the Caucasian ethnicity. Regarding his academic qualifications, he is a McIntosh High School alumni.

During his high school, he was a multi-talented young man who became a member of the baseball and football teams and was also involved in dance and chorus.

Finally, he became a theatrical performer. And, his father gave him one year after his graduation to attempt racing. He thought he couldn’t let his opportunity pass him by, and since then, he hasn’t looked back since.

In the year 2008, Garrett started racing and was entitled ‘Rookie of the Year.’ Later on, he went to the ARCA Racing Series in 2013 after spending his initial years with the Legends Car Racing Series.

Then, in the following season, he joined the NASCAR Truck Series and raced for MB Motorsports at Atlanta Motor Speedway. Besides, the racer joined Xfinity Seris in 2015 and competed with JD Motorsports in the No. 0 Chevrolet Camaro.

He appeared in the Monster Energy NASCAR Cup Series in 2018, driving for StartCom Racing.

Who Is Garrett’s girlfriend? Were they married?

An American Car Racer is dating his longtime girlfriend, Keeley Dubensky, based on his timeline updates. The romantic couple has been dating for over three years and often shared their first photo in October.

Nonetheless, the lovely pair has not yet been engaged or married. Both are at the pinnacle of their professions and must be waiting for the right moment to propose and walk down the aisle.

Keeley works as a series administrator, and the duo has been spotted together at several events holding their hand by hand. Without any doubt, we can tell that the lovebird would get married soon and have a blissful life together.

In the 29 years old, handsome hunk might have accumulated millions of dollars from his racing career; however, he has kept his lips locked and hasn’t mentioned his net worth, salary, and other assets in the media.

But from an investigation, we learned that a racing driver earns $500 to $700per race, primarily through sponsorship. In the same way, competitive and experienced drivers make over $100K from each race. So, the star might be earning in the same range.

To win prize money, a stock car driver does not need to win an event. They get their prize money by finishing first in the series.

Likewise, Smithley has also competed in professional tournaments for more than a decade. Through his sponsorship and advertising deals, Garrett must be making a six-figure sum.

NASCAR has banned the publication of its drivers’ salaries and prize money since 2016.

Additionally, he received $63,731 in the NASCAR Camping World Truck Series in 2015 after competing in four events, $21,071 from the Xfinity Series in the same year, and CDM Motorsports pays him a yearly salary of $330,000.

Hence, the racing driver is still relatively early in his career and will make a notable amount of money in the upcoming days.