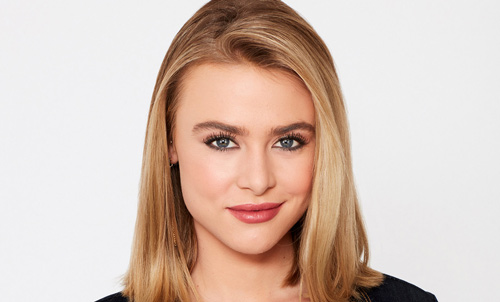 Once Daytime Emmy Award-nominated, Hayley Erin is an American actress. She is known for her role on the American television soap opera, The Young and The Restless and also on American daytime television medical drama, General Hospital. In addition, she also played in the TV series, Bucket & Skinner’s Epic Adventures, and NCIS.

Her fans are interested to know about her relationships. Is Erin dating anyone? What is the net worth of Hayley? To know more details about Erin’s career as well as her personal life, net worth, and age, read more.

Hayley Erin was born as Hayley Erin Feil on July 13, 1994, in Los Angeles, California, US. She grew up in the same place where she born alongside her brother, Hunter. She holds an American nationality and belongs to the mixed ethnic background of English and French. Further, the actress has not disclosed her educational background.

Who Is Hayley Erin Husband? Is She Married?

No, Hayle is not married. Currently, the actress is single and enjoying her singlehood. Previously, she was in a relationship with Logan Von Luedtke. The couple dated for three years and shared a good company to each other. Further, the couple never failed to flaunt their relationship via social media i.e. Instagram.

After dating for a year, the couple got engaged after Logan proposed to her during their trip to Hawaii.

Unfortunately, after dating for three years, Hayley and Logan decided to spit up around in 2017. The duo broke off their relationship due to their personal reasons. In an interview, the actress also confessed saying;

“It’s a very transitional period. Logan and I were together for years, so it’s an interesting, brave new world I’m venturing out into – which is single adulthood! I’m figuring it out.

Currently, the actress is single. Well, she might be focusing on her career as of 2019. Though the couple is no more together, Hayle has not removed the posts that she posted on her Instagram along with her ex-fiance, Logan Luedtke.

Besides, Erin is free of rumors and controversies as of 2019.

The famous actress, Erin Hayley began her career through an American television sitcom, Malcolm in the Middle (2004) episode and the same year, she played in the American crime drama, The District. She was also seen in the American sketch comedy television series, MADtv in the 8  episodes along with Craig Anton, and Nelson Ascencio.

Moreover, the actress also did well and more roles on various television series like Emily’s Reasons Why Not and The King of Queens both in 2006, Two and a Half Men (2008), The Young and the Restless (2008-2010).

Likewise, Hayley even played in the American television drama series, Big Love along with the famous actors Bill Paxton, Jeanne Tripplehorn, and Chloë Sevigny. Currently, the actress is playing in the American drama mystery-thriller television series, Pretty Little Liars: The Perfectionists along with Sasha Pieterse, Janel Parrish, and Sofia Carson.

Therefore, Hayley is doing really well in her career and we wish she will soon take over a satisfiable space in the movie industry and will work with more great actors/actresses.

Hayley Erin’s has collected a huge amount of net worth through her acting career. Her net worth is estimated to be around $1 Million as of 2019. Throughout her career, Hayley’s has played in several TV series. Further, the actress has not revealed her salary but it is known that she earns between $12,000-15, 000 per episode of the series.

Some of her notable TV series are Pretty Little Liars: The Perfectionists, Melissa & Joey and General Hospital. In the American drama, mystery-thriller television series Pretty Little Liars: The Perfectionists her co-star, Sasha Pieterse’s collected an estimated net worth of around $2 Million and her another co-star, Janel Parrish’s net worth is $700 Thousand as of 2019.

Currently, Erin is enjoying a lavish life with her family.