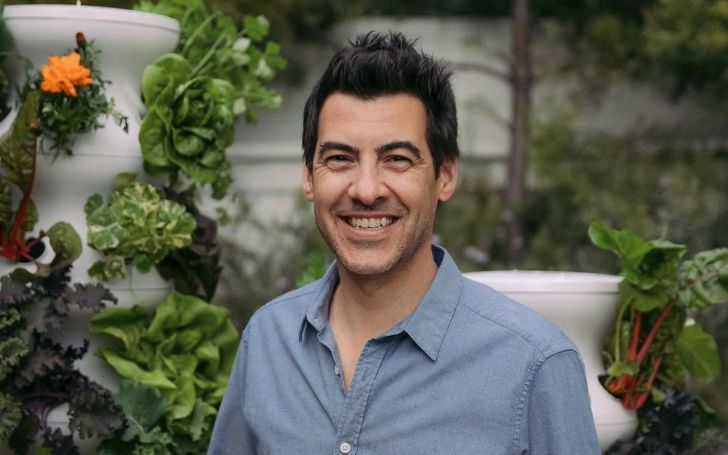 Jacob Pechenik is one of the brilliant film producers. Besides, he is a founder of a sustainable food company, @lettucegrow, an initiative of the Farm project. Its mission is to deliver healthy, sustainable harvests to every house.

Jacob Pechenik is widely known after his marriage with the gorgeous and multitalented artist Zooey Claire Deschanel. She is a jaw-dropping model, amazing actress and an incredible musician and songwriter.

Unfortunately, Zooey and Jacob ended their marriage officially in 2020.

Further, know more about the producer, including his marriage and Divorce with Zooey Deschanel. First, let’s start with his marriage.

Actress Zooey Deschanel was first married to musician Ben Gibbard, a lead vocalist for Death Cab for Cutie and The Postal Service. On September 19, 2009, they tied the knot near Seattle, Washington.

Sadly, the pair couldn’t last long. Therefore, the musician and an actress declared their separation on November 1, 2011.

Lucky Zooey found love again when she met the producer, Jacob Pechenik. Pechenik and Deschanel met on the Bill Murray comedy Rock the Kasbah set. After dating for some time, they engaged in January 2015 and walked down the aisle in June.

However, After four years of blissful marriage, Jacob Pechenik and Zooey Deschanel sadly split in 2019. They stated,

According to court documents, the Fim producer Jacob Pechenik filed for Divorce after being separated for 1 month.

At Los Angeles’s Stanley Mosk Courthouse, He filed a dissolution of marriage with minor children petition on Tuesday.

The film producer and an actress share two children. Are you wondering about these kids? Continuing scrolling to know about them.

The producer and an actress are blessed with two beautiful kids. They first welcomed an angelic daughter Elsie Otter on July 15. After two years, They had a son, Charlie Wolf, in May 2017.

The pair will have joint custody of their two children, Elsie Otter and Charlie Wolf, who is 4 and 3 year old, respectively.

Unfortunately, Zooey Deschanel and Jacob Pechenik’s marriage is officially over. The divorce judgment was filed in LA Superior Court.

Furthermore, the ex-pair made some legal name adjustments. As actress Zooey had changed her name to Pechenik after her marriage to Jacob, she has switched her last name back to Deschane.

Besides, they also legally changed their children’s last names to include Deschanel.

The kid’s last name should always be Pechenik, and Deschanel must be a middle name. These names should be used only on documents.

It is done like this to facilitate the couple’s joint custody arrangement and avoid legal ambiguity when the mother and children travel together.

In addition, the ex-couple have reportedly agreed on not splitting their assets, comprised of all retirement‚ pension or deferred compensation.

Has the film producer remarried, or is dating anyone?

As Jacob Pechenik hasn’t revealed anything about his current partner, it seems like he is single. Instead of marrying and dating, he enjoys spending most of his time with the children.

On the other hand, His ex-wife, Zooey Deschanel, is dating Property Brothers star, Jonathan Scott. The fact is it was really quick! After her split with the producer, she went off to date Jonathan.

Come on; it was just one week after the split! It’s quite surprising, but it seems like the pair are enjoying it as we can see how the duo admires each other in Instagram posts.

Zooey and Jonathan met in August 2019 while filming an episode of Carpool Karaoke: The Series. In addition, the duo also filmed a Carpool Karaoke segment alongside Scott’s brother drew, HGTV co-star and Deschanel’s actress sister, Emily.

This incredible Fim Producer was born on June 16, 1972, in San Antonio in Texas, United States. He is a 50-year-old charming and handsome, standing 1.73 m tall whats more that adds to his charm are his captivating brown eyes, black eyes and a perfect smile.

Talking about Jacob’s Education, He attended the Massachusetts Institute of Technology, earning a Bachelor of Science Degree in Chemical Engineering.

The film producer lives a lavish life as he holds a large fortune. Jacob has a hefty networth of over $3 million.

Undoubtedly, Jacob has gathered this ample sum through his successful career as a Film Producer.

First, the producer served as an executive producer for Terri’s movie in 2011. Then in 2012, he produced the film Kiss of the Damned.

Similarly, in 2013 as an executive producer, he produced amazing movies such as Before Midnight, We Are What We Are, The Immigrant, Jobs, Hateship Loveship, Devil’s Knot, Life of Crime, Cold Comes the Night and The Inevitable Defeat of Mister & Pete.

Besides, He also produced films, Song One; She’s Funny That Way, Electric Slide, The Skeleton Twins, and Black or White. Also, a 2014 American mystery film, Amnesiac and a 2015 American comedy film Rock the Kasbah.

Moreover, Rock the Kasbah was projected to gross $6 million. However, The film grossed $529,000 on its first day. Similarly, in its opening weekend, it grossed $1.5 million.

It’s a blocky and ultra-modern structure covering 3,488 square feet with four bedrooms and four and a half baths.

Moreover, the home has a 1,300-square-foot rooftop deck with breathtaking sunset views and lots of space to lounge or dine al fresco.

For more, Stay with ALLSTARBIO!