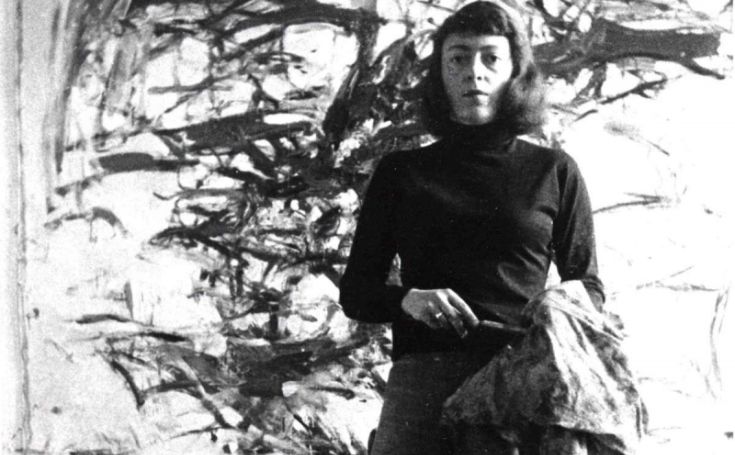 Further, she was among the few female painters in her era whose work was critically applauded by people worldwide.

Moreover, Joan worked in pastel and made other works on paper. Also, she was an active participant in the 1950s in the New York School of artists.

Sadly, the talented painter is no more with us; she died on October 30, 1992. If you want to know the reasons behind her death, then continue reading the entire article.

The skillful artist Mitchell was born on February 12, 1925, in Chicago, Illinois, under the zodiac sign of Aquarius.

She is the second of two daughters whose name is still unclear. And, the star enjoyed diving and skating growing up along with her sibling.

Growing up in the Streeterville neighborhood, Joan frequently attended Francis W. Parker School. Then, the painter enrolled herself at Smith College in Massachusetts, from where she graduated with a Bachelor of Fine Arts degree in 1947.

The artist was a Master of Fine Arts graduate from The Art Institute of Chicago in 1950.

Vocation Achievements over the Years

Joan’s paintings and print works, exhibited in museums and major art galleries across the United States and Europe.

In 1951, her abstract painting was shown in a historical, ground-breaking exhibition, Ninth Street Show, alongside other notable painters like Willem de Kooning, Jackson Pollock, and Hans Hofmann.

Moreover, her solo presentation, conducted for the first time in 1952 at the New Art Gallery. And, she staged an exhibition named “My Five Years in the Country” in 1972 at the Everson Museum of Art in Syracuse, New York.

In December of 1988, people noticed her retrospective exhibition for the first time, which featured 54 paintings she did from 1951 to 1987. With her impeccable creations, Joan had become one of the successful and renowned painters of her time.

Her other exhibitions were held in Whitney Museum of American Art, Birmingham Museum of Art, Modern Art Museum of Fort Worth, The Phillips Collection, etc.

Her artworks are part of many public collections in the United States and Europe, including the Museum of Modern Art, Whitney Museum of American Art, Art Institute of Chicago, Walker Art Center, and many more.

The celebrated print-maker, Mitchell was bound in marital alliance with Barney Rosset, publisher and editor-in-chief of the magazine Evergreen Review. In 1949, the duo walked down the aisle in an intimate wedding held in Paris.

During the initial phase of their relationship, Rosset followed her to New York, where Joan introduced Barney to her abstract expressionist friends. Subsequently, they moved to France, where the pair ultimately married.

In 1951, the husband-wife couple returned to New York. Later on, their married life began to lose its spark. Though they drifted apart, the lovebird was still friendly and decently resolved their issues.

In 1952, the twosome dissolved their wedlock officially with a divorce. The tandem stayed as man and wife for three years but shared no children.

After separating from Barney, Joan was romantically involved with Jean-Paul Riopelle, the French-Canadian painter. Further, the two were in a romantic relationship from 1959 through 1979 but never married.

Rossett and Jean first met back in the summer of 1955 in Paris. Extending the same passion for painting, the ex-duo quickly clicked and stayed longtime friends and lovers.

Even before they knew each other, both of them had already flourished in developing abstract paintings.

Furthermore, the former couple started dating back in 1959 but didn’t move in together. They kept separate homes and studios near Giverny.

For more than two decades, the ex-pair was in a romantic and turbulent relationship. The expressionist devotees spotted them together drinking and dining almost every day before ending their relationship in 1979.

The tragic demise of the Greatest American Painter, Joan Mitchell

The overall health of Joan significantly began to degrade from the early 1980s, which drastically impacted her work. Later in 1984, the artist diagnosed with oral cancer, to which mandibulectomy was proffered.

A pioneer in radiation oncology, Jean-Pierre Batain, recommended radiation therapy, which operated for her but left her with a dead jawbone.

Later, the entertainer also grew anxiety and depression; although she quit smoking after the treatment, she remained an excessive drinker.

In 1992, Mitchell, diagnosed with lung cancer, which was not in the treatable stage and returned to her then resident Vétheuil in France.

After that, she got admitted to a hospital in Paris. On October 30, 1992, the painter breathed her last breathe at the American Hospital of Paris.

Although the str ceased to exist, her legendary work will continue to amaze people for many more ages from now.

The innovative artist was good at filling up the canvas with rich layers of vibrant colors and an ever-ready person to assist the ones asking for a favor.

She never hesitated to support the painters who came to stay with her at Vétheuil.

Chicago native Joan provided accommodations for days and months to the young painters. The kindness and generosity she spattered in her lifetime returned as the formation of the Joan Mitchell Foundation after her sad demise.

Further, Joan Mitchell Foundation is a non-profit company established in the memory of the late American Painter in 1993, located in Manhattan, New York.

The foundation sponsors and amplifies the opportunities for visual artists through commissions, stipends, residencies, and related endeavors.

Additionally, the foundation enables and maintains her legacy, including her exceptional works, photographs, papers, and anything about her life and work.

How Much Is Abstract expressionist Painter’s Net Worth?

Illinois native gorgeous woman Joan was one of the prominent female painters of her era. Her abstract expressionist paintings were marvelous art pieces and were sold for millions.

As per some tabloids, she had a jaw-dropping net worth of $95 Million from her worthwhile painting career.

After the sad death of her mother in 1967, she inherited her wealth, which was enough to purchase a two-acre estate above Vetheuil, a little town on the Seine. Besides, Joan lived there unit the last days of her life in 1992.

There is no denying that the multi-talented and creative personality must have relished a lucrative lifestyle in Chicago before her death.

As people worldwide critically applauded her abstract works over the mainland and awarded lucrative amounts from her work.

Likewise, she earned over $30,000 in art sales, which was a respectable amount for a woman painter at her time.

In 2007, her ethereal portrait Ste. Hilaire (1957) was sold for $3.8 million by the Art Institute of Chicago at Christie’s New York. Also, in the year 2012, Untitled (1971) painting was sold for $7 Million at Christie’s Paris, becoming the second-highest price acquired by a female painter in an auction.

Apart from this, her other work, Untitled (1960), was sold at Christie’s New York for the price of $11.9 million in 2014, placing an auction record for a female artist.

Belatedly, it was overtaken with a painting by Georgia O’Keeffe, which was auctioned for $44.4 million. According to Bloomberg, Mitchell’s career earned a massive $239.8 million in sales from 1985 through 2013.

A central figure in the second generation of Abstract Expressionists in the United States, Joan was honored with several awards during her lifetime.

In 1947, the star was honored with James Nelson Raymond Foreign Traveling Fellowship by the Art Institute of Chicago, and the Lissone Prize was bestowed upon her in 1961.

The delighted colorist’s career as a painter rose with each passing year. Also, the Art Institute of Chicago and Miami University honored Joan with Honorary Doctorates fr in 1987 and 1971, respectively.

More than this, in 1989, she received the award for painting by the French Ministry of Culture.

Stay Tuned With AllStarBio, To gather Collective Information Relation On Your Favourite Celebrities.