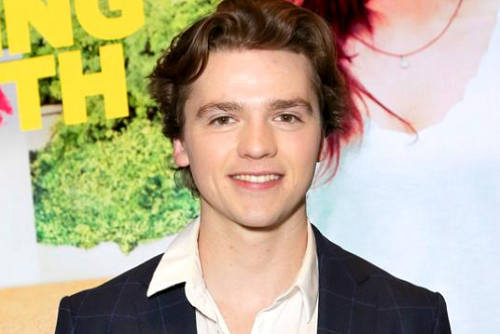 Have you watched the 2018 American teen romantic comedy film The Kissing Booth? If yes, then you might know the actor Joel Courtney who played the role of Lee Flynn in the film. Not only it but Courtney also appeared in other films including F the Prom, The Empty Man, Mercy, and others.

Along with the great success in the entertainment industry Jole earns a decent amount of money. His net worth is $2 Million as of 2019.

Joel Courtney was born on 31st August 1996 in Monterey, California but later moved to Moscow, Idaho. He is the son of Dale Courtney (mather) and Carla Courtney (mother). His parents are both school teachers. In addition,  Courtney grew up along with his three siblings, two elder brothers Caleb Courtney and Josh Courtney, and one elder sister, Chantelle Courtney.

Moreover, Courtney was interested in acting since his young age and also acted in a few school’s plays. He also attended a few training programs in acting but never received any professional training.

Is Joel Courtney Dating Anyone? Know About His Relationship

No, Joel Courtney is not dating anyone. As of now, he seems to be single and enjoying his single life. Though Courtney is currently single, previously he was in a relationship with an American actress Katherine McNamara. The couple began dating in 2012 however, after dating for a year the couple parted their ways.

Shortly, after the break up with Katherine, Joel was spotted together with Isabelle Fuhrman and their fans began guessing that the couple is in a relationship. However, neither Courtne nor Isabelle confirmed dating each other.

In addition, Joel’s fans also thought Jole and his The Kissing Boot co-star Joey King were in a relationship. The couple even shares pictures of each other on their respective social accounts. Despite the regular appearance on each other’s social media, the pair turned out to be closed friends just like their on-screen characters in the movies. Moreover, Courtney also considered Joey as his sister in real life.

Such an incredible night! @joeyking won! I got to present! Met new people and make new friends. Thank you @nickelodeon for bringing us all together. It was truly an unforgettable day. #nickelodeon #kidschoiceawards

As of now, Joel is living a single life and enjoys most of the time with his family, friends, and co-stars.

How Much Is Joel Courtney’s Net Worth?

Joel Courtney amasses a decent amount of money from his profession as an actor. His net worth is estimated to be around $2 Million as of 2019. Being active in the entertainment industry since a long time Jole has starred in a number of hit movies and TV series. In addition, he earns an average annual salary of around $49986.

In addition, Jole also played in the 2011 American science fiction monster thriller film Super 8 which was made on the budget of $50 Million and collected $260.1 million on the box office. In the film, Jole shared the screen along with Kyle Chandler, Elle Fanning, and others.

The American actor Joel is active on Instagram and has over 3 million followers. From his social media, he earns somewhere around $7,135.5 – $11,892.5 annually.

Thank you @vanityfair x @lorealmakeup I had an amazing time last night and got to make a lot of new friends. Also @grace_phillips, you always make me look so good ??