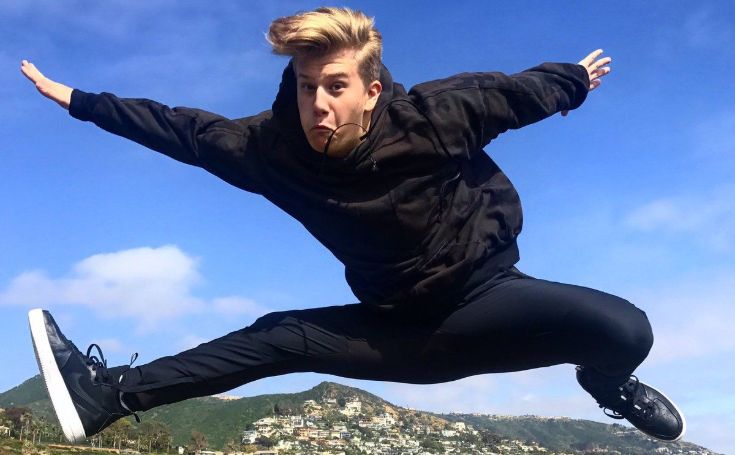 People can easily show their talents by stepping up to social media platforms in today’s world. Justin Roberts also used social media to reach as many people as possible.

By profession, Justin is an American social media star who gained fame for his eponymous YouTube channel and his Instagram profile.

Further, he is famous for his lifestyle and comedy skits vlogs on the YouTube platform. Both of his social accounts have boasted over a million subscribers.

Also, his beloved fans nicknamed him a freshman after he joined the Team 10 house and was one of the youngest members to join Jake Paul’s Team 10.

Similarly, this guy has published vlogs and comedy skits with fellow Team 10 members, but later, the star left the team.

As a musical artist, he recorded and released two solo songs, Way Too Much and Six Figures, which garnered over 16 million views.

The vlogger enjoys playing basketball more upon this, and his aspiration is late NBA legend, Kobe Bryant. Let’s take a glance at his personal as well as professional below.

Miami, Florida native Justin Roberts amassed a considerable fan base from his comedy skits and lifestyle content via YouTube.

As of 2022, his channel garnered over 1.15 million subscribers and accumulated total views of 85.5 million.

Not to mention, Justin’s current source of his income is through his YouTube channel. As per SocialBlade.com, his channel makes $4 to $70 per month and $52 to $840 a year.

He maintains a decent net worth of $350,000, which is more than the famous YouTuber Ice Poseidon’s net value.

Additionally, the handsome hunk was a member of the social media incubator house, Team 10, based on 15,000 square feet.

His fellow YouTube star, Jake Paul, purchased for $6.9 Million, and he was collaborating with his fellow Team 10 members, including Anthony Trujillo, Chance Sutton, Erika Costell, etc.

Also, he might add a decent sum of money from ad campaigns, endorsement deals and many other ventures. Hence, there is no doubt that the YouTuber lives a luxurious life with his family.

Los Angeles, California-based Instagram personality Roberts showed up his $292,000 worth Ferrari 488 Spider 2017 car in his YouTube video on 26th December 2017.

But, the fellow later revealed that his father rented the model from an LA-based traveling agency, Elite Lux Life, to make a viral video on the Internet.

YouTuber finally announced that he bought the expensive car at 15 by listing the #DreamsDoComeTue hashtag on Instagram in November 2017. Nonetheless, he again shared a video of his fellow YouTuber, Jake Paul, smashing his Ferrari’s windshield after winning against Justin in a rock-paper-scissors challenge.

After the video had gone viral, the Elite Lux Life firm encountered his father about the incident and threatened to file a deliberate act of vandalism case.

But, Robert’s friend, Jake, paid half of the billing amount. Subsequently, Justin stopped talking about the remaining $35,000 expenses of the car with the company so that they are planning to file a lawsuit against him again.

Does Six Figures Singer Justin Roberts Have a Girlfriend Or Still Single?

5 feet 10 5/64 inches tall, dashing man is currently in his late teens and keeps his personal life low-key. He has not revealed any information about his relationship status or having a girlfriend.

Moreover, he has been reportedly single up until now. It is challenging to report his personal life since the star has stopped posting videos and pictures.

Similarly, the guy might be busy working on his upcoming YouTube videos to entertain his viewers more. Despite all of this, Robert might not be planning to date someone right now.

On 29th October 2017, the boy posted a video in which he asked her to be his girlfriend with the support of Jake Paul.

In the same video, he flew a banner over Team 10 in an aircraft, but fans and followers began questioning if they were still dating within a few months.

After that, he replied in one of his YouTube videos that she was away from Los Angeles. The prime reason for their breakup was a hectic work schedule and a long-distance relationship, so it became tough to continue their relationship.

That’s why, after a few months of dating, the two broke up.

But, still, the duo is on good terms and maintains a healthy friendship. Similarly, Chloe Moriondo is also enjoying a single lifestyle.

Who Is Justin Robert? His Bio and Wiki.

The famous YouTuber Justin Robert’s birthday comes on 17th August every year, as per his birth year, 2002.

Moreover, his father, Marc Roberts, is a former sports agent and currently working as a real estate developer. Also, his dad is the president, CEO, and chairman of Marc Roberts Company.

Also, his dad is the president and co-chairman of Miami Worldcenter Group and represented several high-profile athletes; he was a consultant for the Tom Cruise movie Jerry Maguire and an author. Meanwhile, his mom, Marci Lynn Mazzotta, is a homemaker.

Likewise, he spent his childhood in Miami, Jupiter, Florida and Beverly Hills, California, with his older brother, Ryan Roberts and his parents.

Additionally, Justin has loved playing basketball through his childhood and high school years. Similarly, he is also passionate about modern technology and equipment because it can do everything, which is impossible for human beings.

Later, he built a small temporary house for himself in their backyard after living in the Team 10 house for some time. Even the boy planned to build a four-bedroom house on the property.

Talking about his academic background, he is currently a college student; however, the lad hasn’t revealed info regarding his educational institution’s names.

Follow AllStarBio, For More Interesting Updates On Your Favourite Celebrity.