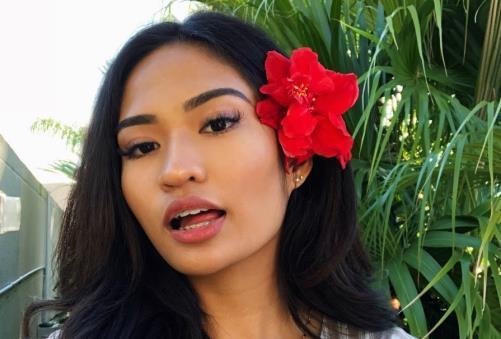 Being successful at a young age gives you tremendous confidence to try new things and establish a great career ahead. Kayla Kosuga is one such individual who became famous with her hard work and dedication at a tender age. Kalya is a YouTuber and as well as an Instagram star. As an internet sensation, she has 846k subscribers on YouTube. Likewise, she has over 200k followers on her Instagram account.

The 18 years old Kayla Kosuga has gained popularity through her makeup tutorials, fashion routines, and lifestyle vlogs. Let’s dig deep into the article to know more about Kosuga.

Kayla Kosuga was born on March 24, 2001, in Maui, Hawaii. She is the daughter of Aidel Kosuga (father) and Keola Kosuga (mother). Moreover, she was born alongside two siblings an older brother Noah Kosuga and a younger sister named Tiara Kosuga. She is American by nationality and belongs to white ethnicity. Her zodiac sign is Aries. Although Kayla was born in Hawaii, she later moved to Florida, Jacksonville at the age of 14.

Although Kayla hasn’t revealed the details about her educational background, looking at her Instagram post we can see that she is a graduate of Sandalwood High School. She might have graduated in the field that interests her.

Kayla started her career when she was just 14 years old. She created her first YouTube Channel on June 14, 2015, and since then she has posted several videos regarding her fashion blog, daily life story, and travel diaries.  Back then, when she created her YouTube channel it was named Kayla and Elijah. But now she changed the YouTube channel name as Kayla Kosuga.

Previously, she worked as a brand ambassador for Zaful swimwear. With a great sucess, Kayla has gained more than 800000 subscribers to her YouTube channel. Rob Gavagan, Kiera Bridget, DanTDM and Sam Pottorff are some other renowed youtube stars.

The 18 years old YouTube star is currently dating Elijah Gomez. Unlike Kayla, her boyfriend is also a social media personality. Together the couple even worked on the same YouTube channel as Kayla and Elijah.

Kayla and Elijah are together for quite long, and we are sure that they met each other before they created their YouTube Channel. For now, the two has spent a good time with each other and there is no news regarding their separation.

Kayla and Elijah have been in a long term relationship since before they started the Youtube channel. As we already know that but how long it has been we don’t have that clue yet. But still, we can guess the bond between them is so strong and also there is no sign of break up anytime soon.

Besides relationship, Kayla has a strong bond with her best friend Caryn Marjorie. Caryn is also a Youtuber and Instagram star. Kayla met Caryn in an event called Beautycon LA event. Since then, they became a good friend and now they are best friends.

Although they are very close to each other they haven’t posted many pictures together. I guess the reason behind that is they live far away from each other. The following picture is the only picture Kayla has posted on her Instagram.

Youtube star Kalya Kosuga has earned a massive fortune from her sucessful profession. However, the exact details about her net worth and salary are still under review. She earns between $483 – $7.7K as estimated monthly earnings while on the other hand, she gets $5.8K – $92.7K per annum from her youtube channel. Kalya has earned quite a lot of fame at an early age, and she even brought the car from her own money. She owns a Mercedes Benz CLA which costs $33,100 dollars.

Kosuga has a big fan following on her Instagram, which helps to grow her net worth in quite so fast. In addition, she also receives a big chunk of money from several endorsements deals and advertisements campaigns. Also, her subscribers are increasing day by day so we can say that her net worth will be doubled in the coming days.