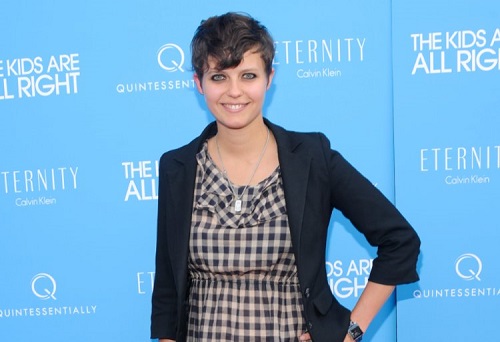 Kim Stolz is an American fashion model, television personality, and financial executive. She began her career as the contest of America’s Next Top Model where she finished at the fifth place. As a model, Stolz modeled for Teen Vogue, Women’s Wear Daily, and others.

Currently, Stolz is a Managing Director at Bank of America equity-derivative sales. With her success in the industry, she is living a lavish life relishing the hefty wealth Stolz amassed from her profession. Her net worth is estimated to be around $3 Million.

Kim Stolz was born on June 8, 1983, in New York City, NY under the birth sign Gemini. She is the daughter of Carol Brandt, a former model who modeled for Ralph Laurena whereas her father Raymond S. Stolz worked as a stocker at Goldman Sachs.

Growing up in the Upper East Side of New York City Kim attended The Brearley School in Manhattan. After that, Stolz went to Wesleyan University from where she earned a bachelor’s degree in a government and intergovernmental politics. In addition, Stolz also wrote her undergraduate thesis about the U.S. foreign policy. Soon after graduating from Wesleyan, Stolz briefly worked in a law firm.

Is Kim Stolz Married? Who Is her Partner?

The 36 years old Kim Stolz openly lesbian. She got married to Lexi Ritsch on 15th June 2013 in an outdoor wedding ceremony. Her partner Lexi is an event planner and also a designer who operates The Dalloway. The couple met each other at a bar in the Hamptons and shortly Lexi proposed Kim popping a question in March 2012. Further, Lexi stated that her mother helped her to pick up the ring and plan the proposal.

After the engagement, Kim and her partner Lexi shared the wedding vows on 15th June 2013. The wedding ceremony took in the yard. On their wedding, Kim wore an a-line gown designed by Mark Ingram whereas Lex wore a bohemian gown. After they walked down the aisle, their guests proceeded through the arch to the cocktail hour.

In addition, on the occasion of their wedding on 20th June 2013 queerlove, an Instagram page also congratulated them.

Unfortunately, their relationship turned bitter. So the pair later separated, but the actual reason behind their separation is still a mystery.

The finalists of cycle 5 of America’s Next Top Model, Kim Stolz currently seems to be in a relationship with a girl whose name is @m_k_london in her Instagram account. Observing Kim’s social accounts it seems like the couple is in a relationship since 2017 after she began posting the picture of her.

Further, the lesbian couple seems happy with each other and they also went for a vacation together. Once on February 14, 2018, Stolz shared a picture with her partner and wished her on the occasion of valentines day with a caption;

Likewise, an MTV News correspondent Stolz also wished her partner on the occasion of her birthday with a caption;

So lucky to be with this amazing, intelligent, ambitious, hilarious, kind and gorgeous woman. Happy birthday @m_k_london !!!

As of now, the 5 feet 8 inches tall star Stolz is living a happy life along with her lover.

What Is Kim Stolz’s Net Worth?

Kim Stolz’s net worth is around $3 Million as of 2019. She earned a good amount of money from her acting as well as modeling career. In 2005, Stolze was a contestant on Cycle 5 of American’s Next Top Model from which she definitely received some paycheque.

After appearing on America’s Next Top Model, Kim signed with Elite Model Management and also signed to Ford Model. Likewise, Kim further featured as one of the CoverGirl’s Top Models in Action.

In addition, Kim has modeled for Teen Vogue, Autostraddle online magazine, Cover magazine, Women’s Wear Daily, and others. From her work with popular magazines, she probably receives a good paycheck like other models Kaia Gerber and Claudia Sulewski.

Moreover, Stolz was listed as one of the well-known contestants of America’s Top Model by AOL Entertainment Canada. She also appeared on Veronica Mars along with Kristen Bell.