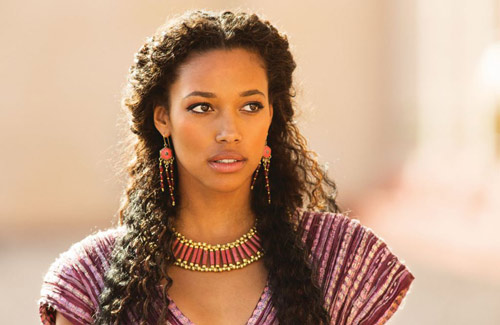 Kylie Bunbury is a Canadian American actress and model. She is known for her role in the Fox drama series Pitch as Genevieve “Ginny” Baker and also in the 2018 American black comedy thriller film Good Night. In addition, the actress’ other TV series credits are Under the Dome, Law and Order: Special Victims Unit and many other.

This young lady has earned a huge sum of money through his acting skills. If you want to know in detail about his net worth as well as about his personal life, keep on reading the article until the end.

Kylie Bunbury was born on 30 January 1989 in Hamilton, Ontario, Canada under the zodiac sign Aquarius. She is the daughter of Alex Bunbury father and mother Kristi Novak. Her father is a Guyanese Canadian whereas her mother is American of Polish and Swedish descent.

A young King was born today! Our little bubby @loki952 is 24! ? You electrify every space you walk in with your humble heart & kindness. You inspire me. You teach me. You are my heart! I love you goonie! This is YOUR year! ???

The actress grew up along with her two younger brothers Teal and Logan in Europe (England for two years, and seven years on the island of Madeira, Portugal). Further, she has not disclosed the details of her education background.

Is Kylie Bunbury Married? Who is her Husband?

Kylie Bunbury is neither married nor single. She is in a romantic relationship with her boyfriend Jon-Ryan Alan Riggins. Going through her Instagram, the couple seems together from 2 years. The actress frequently posts pictures with her boyfriend on her official Instagram account.

Moreover, on 13 August 2018, Kylie shared a picture with her boyfriend.

Our love is a deep river of Understanding & Acceptance, Rooted & filled with Laughter, Free & Ever-evolving. It’s Infinite. 2 years with my calm waters❤️ @jonryanalan Thank you to my best friend and edit wizard @KarliCantor for this clip of the most magical day ?⛵️?

Further, Kylie and her partner Jon frequently shares a picture with each other enjoying vacation and spending time together.

Currently, the actress Kylie and her boyfriend Jon is living a happy life and they are one of the loving couple and caring partner as well. Although the duo is dating for several years, they haven’t mentioned the plans for their wedding.
Also Read Robin Bain Bio, Wiki, Age, Height, Net Worth, Married

The actress Kylie worked as a model first but her agency suggested to try acting. Later she landed her first role as Kathleen in Days of Our Lives for one episode.  In 2011, Kylie had a role in the film Prom as Jordan Ludley and in The Sitter as Roxanne. In addition, on 26 February 2015, it was announced that Bunbury would play the role of Eva in the science fiction CBS television series Under the Dome.

Film taken during one of the greatest experiences of our lives Part 2. Swipe for more magic ✨ #35mm #TravelAidesInUnderstanding #Kenya #Zanzibar

Moreover, in 2016, Kylie played the main role of Genevieve “Ginny” Baker in the Fox drama series Pitch, but the series was canceled by Fox after one season on 1 May 2017. She also played in the 2018 American black comedy thriller film Game Night along with Billy Magnussen, Sharon Horgan, Lamorne Morris, and many others.

Currently, Bunbury is playing in the Netflix miniseries When They See Us as Angie Richardson. In the series is playing along with John Leguizamo, Felicity Huffman, Niecy Nash, and many others.

Kylie Bunbury’s net worth is estimated to be around $300,000 as of 2019. She collected a huge amount of money through her sucessfull acting profession as well as from her modeling career. Having a leading role in a highly acclaimed series like Pitch, it will certainly provide a great deal to the actress’ net worth.

Currently, the actress is active in the industry so, her net worth will be high in the upcoming future.

?✨? Had some Earth Mama fun with the brilliant @imashnguyen behind the camera ? •MUA?- @kellykathunt •Hair ??‍?- @erikavanessa •Styled by- Rummaging through my wardrobe