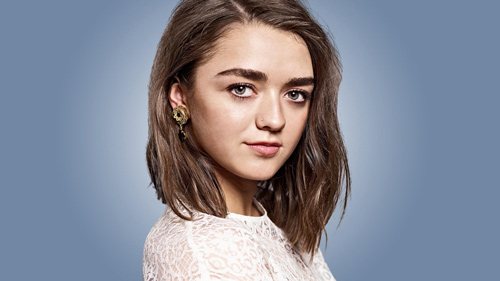 Maisie Williams is an English actress who made her professional acting debut as Arya Stark of Winterfell in the HBO fantasy television series, Game of Thrones in 2011. Moreover, she had a recurring role in Doctor Who as Ashildr in 2015. Also, she made her feature film debut in the mystery, The Falling (2014), for which she won the London Film Critics’ Circle Award for Young Performer of the Year.

Williams has an impressive salary and has maintained a lucrative amount of net worth from her profession. Besides, she describes her first love as dancing and is proficient in several styles such as tap, ballet, pointe, musical theatre, street, and freestyle. Let’s take a glimpse of Maisie Williams’ career as well as her personal life.

Who is Margaret Constance Williams? Her Bio & Wiki

Williams was born as Margaret Constance Williams on 15th April 1997 in Bristol, United Kingdom. Moreover, Williams’s nationality is British and her ethnicity is English. Unfortunately, her parents divorced when she was a kid and then her mother, Hillary Pitt (now Frances), a former university course administrator raised her. She is the youngest of four children including her 3 older siblings are James, Beth, and Ted Williams.

Inside of Maisie Williams’ Career

Talking about Maisie Williams’ profession, Williams started her career playing as Arya Stark, a tomboyish young girl from a noble family, in the HBO fantasy drama television series, Game of Thrones. She continued to garner praise for her performance in the show’s second season, and HBO submitted her for consideration in the Outstanding Supporting Actress category for the 2012 Primetime Emmy Awards.

Maise Williams portrayed as Scalper Scraggly Sue in the 2012 movie, The Olympic Ticket, and as Jo O’Malley in Heatstroke. In 2013, she appeared in the movie, Up on the Roof as Trish. Later in 2014, she starred as Abbie in the movie, Gold. Also in 2015, Maisie made her appearance in the movie, The Falling as Lydia Lamont.

How much is Maise Williams’ Salary & Net Worth?

As of 2019, Maise Williams has an estimated net worth of $6 Million according to Celebrity Net Worth. However, it seems like her net worth is $1 Million as per The Richest net worth. But, we can assume that she has maintained a net worth in six-figures.

In August 2018, Maisie Williams inked the words “No One” on the back of her neck. Moreover, the red-ink tattoo is a tribute to her Game of Thrones character Arya Stark’s mindset as she trained at the House of Black and White. Also, Arya is told to leave behind her own identity and become “No One” in order to join the guild of the Faceless Men.

Furthermore, Maisie Williams has a tattoo on her left forearm reading “little rascal” in red ink.

Moreover, Maisie Williams has a detailed flower on her right bicep.

Maisie Williams and her Game of Thrones co-star, Sophie Turner have matching tattoos from an artist, Kat Paine at Belfast City Skinworks in September 2016. It means “07.08.09” for August 7, 2009 — the date that she found out she was cast in Game of Thrones which was her 1st ever professional acting job.

Lastly, Williams plays Arya Stark and Sophie plays her on-screen sister, Sansa Stark. Both girls have the same tattoo just below their elbow, but Maisie’s is on her left arm while Sophie’s is on her right.

Who is Maisie Williams’ Boyfriend? Her Relationship Affairs

Coming up to Maisie Williams’ personal life, Williams is now 21 years old woman. Moreover, she revealed on her Instagram that she is romantically linked with Ollie Jackson, a British racing driver who currently competes in the British Touring Car Championship. The couple first met in school and they are dating since 2015.

Besides, Maisie Williams wasn’t linked in any controversies and rumors with any men as presented. Further, she hasn’t faced any controversies regarding her personal life and career. Hence, she is living a happy mingle life with her boyfriend and busy working while concentrating on her career. Hopefully, we can assume that Williams is going to be married soon with her boyfriend, Jackson.