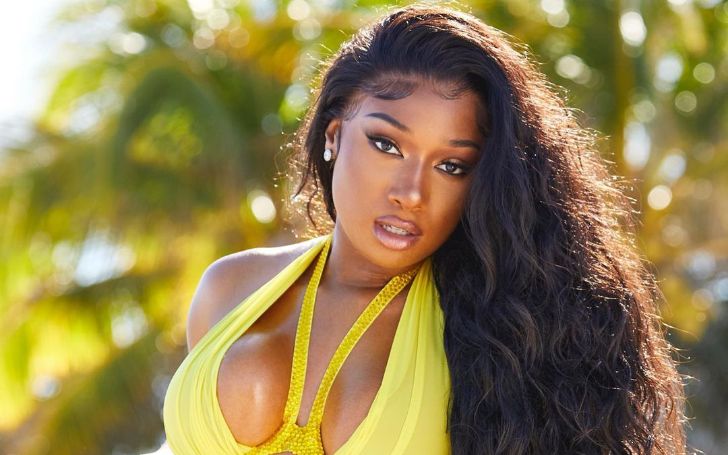 Megan Thee Stallion is the hottest American rapper who grabbed attention when videos of her freestyling became viral on social media platforms. Learn every detail of her in this article!

Rapper Thee Stallion refers to herself as Tina Snow, one of her alter identities. Hot Girl Meg is another altered identity that encapsulates Megan Thee Stallion’s carefree and extroverted side, which she compares to a Party girl in college.

Furthermore, Megan coined the phrase hot girl summer, and it quickly became viral on social media. On April 14, 2018, she used the term for the first time in a tweet. Megan Thee Stallion registered the term hot girl summer as a trademark in September 2019.

In addition, Megan Thee Stallion is noted for her distinctive ad-lib, which entails putting her tongue out, generating an audible “ugh” or “blah” sound.

On the 15th of February, 1995, Megan Stallion was born in San Antonio, Texas, and raised in Houston, Texas. She is about 26 years old. Her parents are Holly Aleece Thomas & Joseph Pete. As a kid, Megan was raised by her single mother, Holly Thomas.

Holly Thomas was a female rapper. She raised Megan by herself for eight years before Megan’s father was freed from prison.

Unfortunately, Megan’s mother passed away after a long battle with a cancerous brain tumor in March 2019. Regretfully, her grandmother also died in the same month. Moreover, Megan’s father, Joseph, passed away when she was just 15.

A 26-year-old rapper went to Pearland High School and graduated in 2013. Following graduation, she attended Prairie View A&M University. After returning to Texas Southern University to pursue a degree in health administration, she was a third-year student in 2019.

This gorgeous rapper Megan is in a very happy relationship with rapper Pardison Fontaine. He is a Newburgh, New York-born American rapper and songwriter.

Fontaine is best known for his 2018 single Backin’ It Up, which featured Cardi B and reached number 40 on the Billboard Hot 100 in the United States. In addition to his solo career, Pardison has co-written songs with Kanye West, Cardi B, and Megan Thee Stallion.

Megan brought Pardison as her date to the 2021 iHeartRadio Music Awards in May. The pair have been dating for a while, but fans were confined to social media posts, mostly from Pardi raving over Megan until the award event.

Finally, Megan spilled the beans on Friday, February 19, during an Instagram Live. She referred to rapper and songwriter Pardison Fontaine as “my boo” while discussing him, confirming the rumors.

In the same vein, Hot girl Meg has dated artists Tory Lanez, G-Eazy, Trey Songz, and Moneybagg Yo. On the other hand, her other half, Pardison’s past relationships, are unknown. However, He has a 5-year-old daughter, Jordy Jr., who was born in 2016. Sadly, the mother of the child is a mystery.

Thee Stallion reaches out and keeps updating her well-wishers through Instagram, which is as @theestallion having 24.8 Million followers with 650 posts. Similarly, on Twitter and Facebook. Furthermore, she’s available on Deezer, Youtube, and Spotify, with 34.9M monthly listeners.

American Rapper thee Stallion officially stepped into the music industry in 2016. She began writing raps during high school at age 16. She told her mother about her passion for rap, but her mother insisted on waiting until she was 21 to pursue rapping as a career.

Megan Thee Stallion released her first single, Like a Stallion, in April 2016. Thee Stallion made her professional solo debut in September 2017 with the commercially released EP Make It Hot. The EP’s 2017 hit “Last Week in HTx” became her most successful single during this period, accumulating millions of views on YouTube.

Megan signed with 1501 Certified Entertainment in early 2018. She released Tina Snow, a 10-song extended play, via the label in June 2018. Megan Thee Stallion confirmed her signing with 300 Entertainment in November 2018, making her the label’s first female rapper.

Rapper Meg released “Big Ole Freak” as a single off her EP Tina Snow on January 22, 2019. Her second mixtape, Fever, was released on May 17, 2019. The album gained critical acclaim and was included on multiple year-end reviewers’ lists. Therefore, Paper naming it the greatest album of 2019.

Suga, her EP, was released on March 6, 2020. The song “Savage” from the EP went viral on TikTok the same month when prominent user Keara Wilson used it in a dance challenge video.

The video had  15.7 million views and 2.4 million likes as of March 20, 2020. On April 29, 2020, a remix starring Beyoncé was released. Soon after the remix’s release, this song became Megan thee Stallion’s first top 10 entry in the United States. It eventually became her first chart-topper in the country.

She featured on Cardi B’s hit “WAP.” It earned her second number-one hit in the United States. Moreover, WAP  broke the record for the most streams for a song in its first week of release.

So How rich is Megan Thee Stallion?

26-year-old Hot girl Meg lives a lavish lifestyle. She holds a Networth of $6 Million. Not to mention, Meg has amassed this massive sum through her music career as a Rapper and Songwriter.