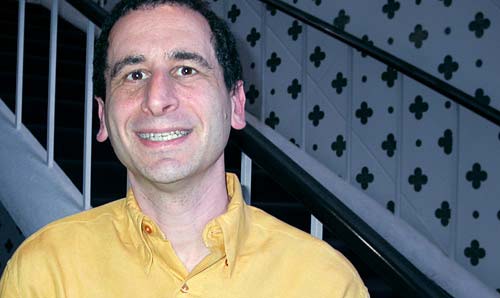 Michael “Mike” L. Reiss is a famous American television comedy writer. Mike Reiss worked as a show-runner, writer, producer for the animated series The Simpsons and co-created the animated series The Critic likewise he is worked on screenplays including Ice Age: Dawn of the Dinosaurs, The Simpsons Movie and My Life in Ruins. He designed and wrote the webtoon Queer Duck.

Reiss was born on September 15, 1959, in Bristol, Connecticut, United States. His mother was a local journalist and his father was a doctor. He joined Memorial Boulevard Public School, Thomas Patterson School then Bristol Eastern High School. Reiss attended at Harvard University.

Reiss began his career in comedy, performing in talent shows and writing. Reiss became co-president of the Harvard Lampoon, with Jon Vitti. He Worked with Al Jean on The Simpsons, The Critic, and other projects.
The humor magazine National Lampoon, selected Jean and Reiss after they graduated in 1981. In the 1980s, they began collaborating on various television projects. During this period Reiss and Jean worked as writers and producers on television shows such as The Tonight Show Starring Johnny Carson (1984–1986), ALF, Sledge Hammer! and It’s Garry Shandling’s Show.

The first episode Jean and Reiss produced was “Mr. Lisa Goes to Washington” September 19, 1991. Reiss has won four Primetime Emmy Awards for his work on the show. The show was executive produced by The Simpsons co-developer James L. Brooks.

Sherman appeared in the episode “A Star is Burns”, which Reiss and Jean returned to produce. In 1994, Reiss and Jean signed a three-year deal with The Walt Disney Company to produce other TV shows for ABC. He also co-wrote the screenplay for The Simpsons Movie in 2007.

In 2000 Reiss independently produced Hard Drinkin’ Lincoln, a series of 16 flash animation cartoons for Icebox.com with director Xeth Feinberg. In 2002, the series was chosen by Showtime where it aired a supporting feature Queer as Folk. Queer Duck: the Movie was released on DVD in 2006.

Reiss has contributed to various film screenplays. He wrote many jokes for the film Ice Age after The Simpsons colleague David Silverman The first live-action film he wrote was 2009’s My Life in Ruins, Reiss defended the film:
He has composed seventeen children’s books, including How Murray Saved Christmas, Co-authored by Mathew Klickstein, his memoirs, Springfield Confidential: Jokes, Secrets, and Outright Lies from a Lifetime Writing for The Simpsons, will be published by Dey Street, an imprint of Harper Collins, in June 2018.

Mike Reiss is a married person who is resident in New York City with his wife Denise, and the two frequently travel abroad. The information about his family is far from the media.

He earns a huge amount of money from his career. His exact net-worth is not known.