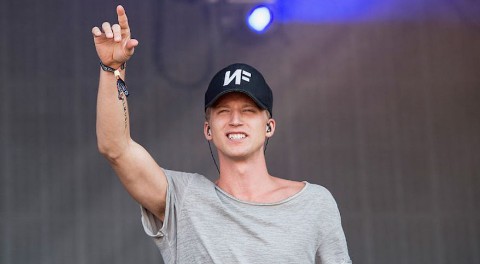 It requires time, luck, and effort to create one’s presence in the entertainment industry, but that entirely turned the table thanks to our current social media. This applies to many overnight stars like 69, 21 Savage, Metro Boomin and 2019’s boom-up artist NF.

Today let’s discuss NF, a popular rapper who gained the limelight more recently despite his continuous effort for over a decade—born Nathan John Feuerstein is popular in the Christian community and has brought a new crowd and a positive wave to the hip hop community.

If you are here to know more about Nathan, then we must say this article is for you.

NF was born on March 30, 1991, in Gladwin, Michigan, the U.S. as Nathan John Feuerstein. His parents divorced, and he grew up with his mom until his dad had to take him back when her boyfriend abused him.

His mom died in 2009 of an overdose that caused him to dedicate the song to her, “How Could You Leave Us.” The same year the death of his mother, he graduated from Gladwin High School and joined the basketball team.

NF started his career in music in 2010. He released his first debut, “Moments,” independently under his birth name. His first album became extremely popular, and he got approached by the recording label ‘Xist Music,’ in 2012, he signed a recording deal.

Then in 2015, NF released his first studio album, ‘Mansion,’ through ‘Capitol CMG.’ It reached number 62 on the Billboard 200, including the songs that featured Jeremiah Carlson,’ Wake Up,’ ‘Mansion’ with Fleurie, and ‘I’ll hold on.’

Likewise, in 2016, his second album,’ Therapy Session,’ won him the ‘Dove Award for the Year’s Best Rap / Hip-Hop Album. ‘Not to forget, in 2017, the rapper also won the ‘Dove Award for Rap/Hip-Hop Recorded Song of the Year for his song, ‘Oh Lord!’ His song, ‘I Just Wanna Know,.’ Along with that, he also has several nominations in his name.

Some numerous speculations and assumptions are circulating the world about the personal life of NF rappers, and here we are to clear all the doubts and questions. NF is a married man.

Yes, you read that correctly; he is a married man who lives a very blissful life with his wife. Feuerstein married Bridgette Doremus in early September 2018 in the presence of his close friends and family.

A month back, his wife, Bridgette, posted a picture of her husband and herself on the social media site with a caption

Marking their four years of togetherness. Although his spouse often seems to share pictures, Feuerstein’s social media seems solely dedicated to music, as he promotes his music on his Instagram account.

The American Rapper NF has a net worth of $6 million as of 2022, as per Celebrity Net Worth. Similarly, his net worth will increase with time as he is already an established-era rapper. Although he has properties in millions of figures, there are no details about the Rapper’s house and the cars he rides.

Looking at NF’s wife’s Instagram page, we can say the couple is living a very lavish lifestyle as they often spend their time together on vacation.

They might start their family soon, which will increase the expenditure, but being a very popular rappers, they can take responsibilitforofor f a new family member.