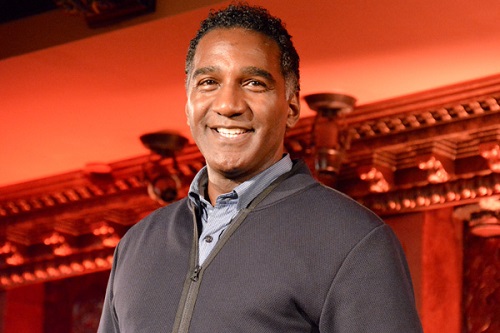 Norm Lewis is an American actor and baritone singer who is well known for playing the role of Javert in the movie, Les Misérables in Concert: The 25th Anniversary (2010). Moreover, he has made his appearance in many Europian movies, television shows, and regional theatres on Broadway. His movie credits are Stand by Me (1986), Sex and the City 2 (2010) and many more.

Is Lewis married? What is his net worth? To know in details about Lewis’ career as well as is personal life, net worth, height, and so on, read the full article.

Who Is Norm Lewis? Bio & Wiki

Norm Lewis is one of the famous Broadway actors who became famous for his roles in Broadway movies and theatrical shows. Lewis is the first African-American actor to perform in the lead role in Broadway’s long-running production of Phantom of the Opera.

Thanks to @playbill for sharing my story about why I put some unconventional Tunes on my Christmas Album. Watch an exclusive performance of “My Favorite Things”  https://bit.ly/2RUo9rs #TheNormLewisChristmasAlbum #parumpumpumpum #NormLewis #playbill

Lewis was born on 2nd June 1963, in Tallahassee, Florida. Moreover, he holds an American nationality and belongs to Afro-American ethnicity. Lewis was raised in Eatonville, Florida. He graduated from Edgewater High School, Orlando in 1981. Furthermore, Lewis worked at the Orlando Sentinel prior to his acting career.

Norm Lewis started his career from the Theater on Park in Orlando, Florida, and credits to Ralph Petillo who ran the theater. Lewis played the role of Agwe in the Gateway Playhouse production of Once on This Island in 1992 in Bellport, New York. Furthermore, he made his Broadway debut from The Who’s Tommy in 1993.

Lewis won the AUDELCO Special Achievement Award in 2014. He started playing the role of Agwe in Once on this Island on 8th January 2018, at the Circle in the Square theatre. Likewise, Lewis starred Caiaphas in the live televised concert production of Jesus Christ Superstar on 1st April 2018, Easter Sunday.

Thanks to the Orlando Sentinel and Matthew J. Palm for an awesome interview ? 'How Orlando's Norm Lewis is becoming a poster boy for Christmas' Read full article: https://bit.ly/2QPGIRr @orlandosentinel  #TheNORMLEWISChristmasAlbum #NutcrackerCool  #parumpumpumpum #NormLewis

Lewis has also performed at many venues, including Lincoln Center (where his concert was filmed for the TV special, Norm Lewis: Who Am I?), Apollo Theater, Joe’s Pub, and the New Jersey Performing Arts Center.

How Much Is Norm Lewis’ Salary & Net Worth?

Moreover, the movie was released in altogether 848 theaters, and it ended up collecting $52,287,414 overall, well above its $8 Million budget in the box office.

I hope you all had a great Thanksgiving! Here's a snippet of the making of my Christmas Album. As you can see we had a blast! The Album is now available on  @iTunes, @cdbaby @amazonmusic @Spotify @youtubemusic @TIDAL and @AppleMusic  Follow the link=>http://bit.ly/parumpumpumpum  #TheNormLewisChristmasAlbum #NormLewis #parumpumpumpum

Norm Lewis is not married as of  April 2019. His fans and followers are very excited to know who is the lucky woman in Lewis’ life? However, Lewis mostly keeps his personal details under the shade, thus, he hasn’t revealed any information about his love life to the media.

As Lewis is not married yet and is not dating anyone, many people speculate to him being gay. But so far, he hasn’t talked anything about his sexuality to the media. Furthermore, he hasn’t done any activity which could make people feel doubt regarding his sexuality.

Lewis is active on social media including Instagram and Twitter where he often shares pictures with his co-stars and fans. Nevertheless, he hasn’t shared any suspicious picture yet.

Some Interesting Facts About Norm Lewis