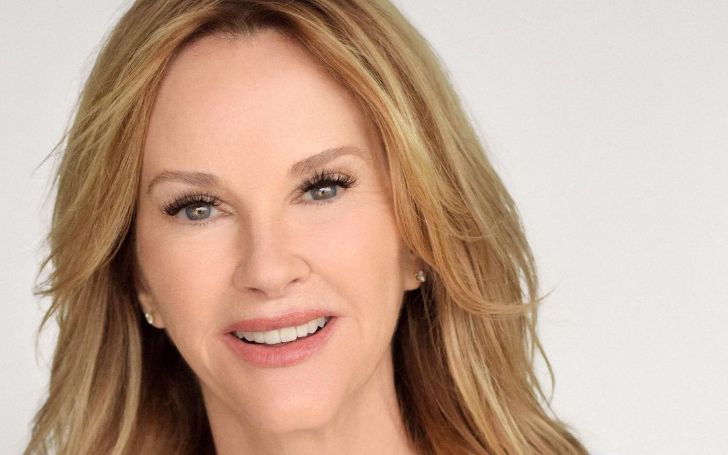 Rebecca Staab, a stunningly beautiful and incredible actress, is best known for portraying Love Potion No.9. The actress is popular in this film for verbally castrating bar room scenes with Tate Donovan.

Fans, if you’ve watched this romantic and humorous film  Love Hard that stars the most amazing actors, Nina Dobrev, Jimmy O. Yang, Harry Shum Jr and James Saito, including Rebecaa Staab, you all can see the mesmerizing acting of  Rebecca’s acting.

What is the networth of Rebecca Staab?

Actress Rebecca Staab has been in the movie industry since the mid-’80s. Before acting, she was the smash hit model. Rebecca Staab holds an enormous sum; therefore, her networth is over 1 million dollars.

Rebecca has gathered this hefty sum through her successful career. Firstly,  Rebecca started her career as a model. She was a professional model based in Paris and worked in beautiful countries like Italy, Germany and Japan. Moreover, Rebecca worked with Ford Modeling Agency.

Furthermore, She has also worked in network classics Cheers, Seinfeld, Ellen, The Wonder Years, Columbo, Beverly Hills. Plus, 90210, and The Drew Carey Show.

Every girl isn’t as fortunate as Rebecca Staab to get the chance to be a Marvel Comic Superhero. She featured Susan Storm, the invisible girl in the first cult smash version of The Fantastic Four.

In addition, Rebecca co-starred I’m the film The Miracle Season with Helen Hunt and William Hurt. She also appeared in the ABC thriller series, Somewhere Between featuring Colleen Dekizer.

Furthermore, she played the newspaper’s society Editor/Know it as Eileen Bruce on the Chronicle Mysteries. She has also starred in the Indy film, A House on a Hill and the renowned film, A Perfect Ending.

Other notable roles of Rebecca include:

Rebecca participated in the Miss USA pageant and won the top five finalists as Miss Nebraska.

Talking about Staab’s education, She attended  Ralston Senior High School graduating in 1979. Staab was excellent in academics; therefore, she had a 4.0 GPA in high school and college.

Is the actress married? Or is she dating?

William DeVry is a longtime partner of Rebecca Staab. The exact date of their beginnings and meeting is yet to reveal.

Also, the lovely couple hasn’t spilled the beans about their love story. However, the couple has been head over heels in love with each other since day one.

Another point, all of us wonder, why are these beautiful pair not marrying? The reason behind this is also yet to be revealed.

“Do the pair have any children?”, if this question is popping in your minds, it’s a big NO. Although the couple has been together for a long time, they do not have children.

The lovely pair loves animals. As a result, they are an animal advocate and are very active in dog rescue. They foster dogs and pets who are criticized severely for euthanasia. They rehabilitate the pets and find them good homes.

Currently, Rebecca and William are the owners of five dogs. They reside in a registered historic house in the Hollywood Hills. Further, The actress is an expert in interior design, landscape architecture and gourmet cooking.

Moreover, The couple is an avid traveler. They have been from Russia to Costa Rica, Japan to Austria, Italy to Bali, France to Singapore.

Likewise, Crete to Zihuatanejo, Estonia to Kauai, Helsinki to the Canary Islands, Istanbul to Hong Kong. Also, Tahiti to Tulum and Tunisia to St. Barts.

Rebecca’s lover is a Canadian actor. He is a 53 year old handsome, best known for his roles in American daytime soap operas on All My Children, Port Charles and General Hospital.

He is also widely known for his roles on  The Bold and the Beautiful, Stargate SG-1, InSecurity, and Nikita. The actor was nominated for a daytime Emmy Award for Outstanding Supporting Actor in a drama series in 2004.

William DeVry’s estimated networth is above $2 million. The actor has appeared in 5  films and 40+ Tv series to date.