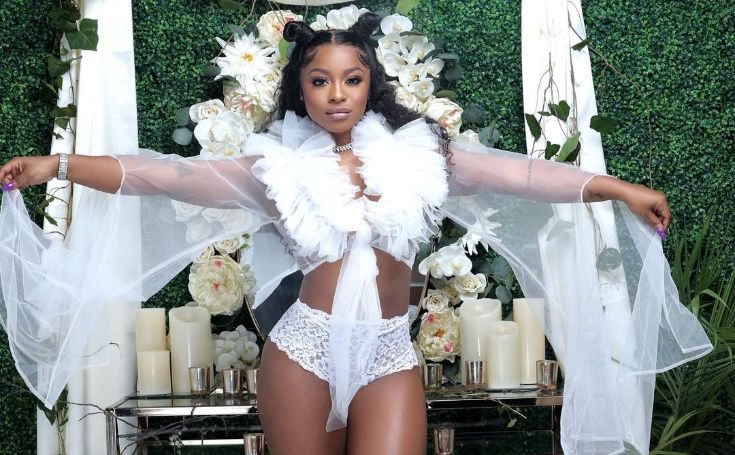 We have often heard the case where someone born in a wealthy family is likely to take life for granted and enjoy the fortune of their parents. However, this is not the case with Reginae Carter. Despite being born into a rich American rapper and musician, she paved her path in other fields.

Reginae is an American actress, singer, and social media star who is best recognized for being the daughter of Lil Wayne and his ex-wife Toya Johnson, famous for being a reality TV personality.

Moreover, she also came to the spotlight after appearing as Nicole in the film Dear Santa; I Need a Date. Stay tuned to the article below to know more about Carter’s personal and professional life.

How rich is Reginae as of now?

As of mid-2021, the estimated net worth of Carter is over $2 million, collected through her involvement in the world of entertainment as an actress and her activity on the social media scene. Likewise, she received around $19k to $208k as an actress.

Aside from that, the star also adds some amount to her account from her Instagram posts, which are usually in the five-digit amount.

Furthermore, she probably boasts the impressive wealth of her famous father, Lil Wayne. Wayne has accumulated a hefty net worth of over $170 million throughout his long-successful career as a rapper and musician.

As we know, Reginae was born into the wealthiest family background, so it’s no wonder she was able to buy her very first home at a very young age. She may not have asked her parents for any of the money to afford it; however, she cashed in on their fame to do so.

And her effort takes us back to Kylie Jenner, claiming to be self-made. Undoubtedly, she isn’t, because her family’s fame has done, it gives her opportunities the average Joe couldn’t dream of.

Not to sound like a hater, but would the star be able to afford such a beautiful new home if she didn’t have a head start in life because her father was a famous rapper.

Anyhow, let’s congratulate her because whatever she did to become a homeowner has paid off; she’s got the keys in her hand, and she’s ready to host some dinner parties.

Unfortunately, not before she has her housewarming party. She has posted on her Insta stating that:

“Today is a big day for me ! At the age of 20 years old , I just got the keys to my own house ? I’m a homeowner now ?so blessed and thankful ! This process was the most tedious process I’ve ever had to be apart of in my life lol but I’m so glad it’s finally over ! Big thanks to @b_luxurious for helping me find my dream home ? house warming coming soon ! Imma need MTV cribs to come holla at me lol ! #sohappy #blessed.”

Reginae Carter hails from Louisiana, United States, as Reginae Djuan Carter, on November 29, 1998, and she is22 years old now.

Her parents, Lil Wayne–birth name Dwayne Cart wee and Toya Johnson, were high school sweethearts, and they welcomed the star when he was 16 and Toya was 15 years old. Then, they married in 2004 but divorced after two years.

Additionally, her father has had many relationships. So, she has three step-siblings on her father’s side, each from a separate mother. And, they were three younger paternal half-siblings, named Dwayne Carter III, Cameron Carter, and Neil Carter, and a younger maternal half-sister named Reign Ryan Rushing.

However, she spent a lot of time with a well-known rapper and family member; her father was imprisoned in 2007 for illegal custody of weapons and cannabis.

In July 2016, her maternal uncles, Josh and Rudy, were found dead inside a car in New Orleans; she loved her uncles, and that event devastated her for a long time.

In addition to this, Carter holds American nationality and belongs to the African-American ethnic group. And, she matriculated from a local high school and then enrolled at Clark Atlanta University but hasn’t completed her studies.

Around the same time, she started appearing on her mother’s reality television program, ‘Tiny and Toya.’ Later, she moved on to Growing Up Hip Hop: Atlanta and The Wendy Williams Show.

But she did her official debut in 2019 with the TV movie Pride & Prejudice: Atlanta. Following that, Carter starred as Nicole in Dear Santa; I Need a Date.

Besides, in 2009, her musical career began by joining the girl group OMG, then she became popular as The OMG Girlz. After a while, she left the group after releasing their first single, “Ain’t Nobody,” to pursue a solo career.

Apart, she is also well known for her Instagram posts, where she demonstrates her uniqueness with fashion. There, she received thousands of likes, and such an Instagram post drew a lot of exposure. Hence, she became an Instagram sensation globally.

Beauty with the brain, Reginae has an on-again, off-again relationship with Rayshawn Lamar Bennett, better known professionally as YFN Lucci.

Furthermore, the age gap between them has created a lot of media attention. In the following year, they called it quits but eventually rekindled their romance in 2020, and apparently, the couple is still going strong.

The diva is now concentrating on her acting career. And, her Instagram posts state that she loves her sister, Reign Ryan. Aside from that, the actress enjoys being perfectly photographed. Before this, she was in a romantic relationship with Joshua Brown from 2014 to 2016.

Fans have long admired Carter for her sense of style and fashion. She has even been criticized for her fashion sense.

Her aunt, Tiny Harris, once commented on one of her photos. Stating that’s the new Nae, which is her nick with a mad face emoji. That comment provoked a lot of discussion on Instagram.