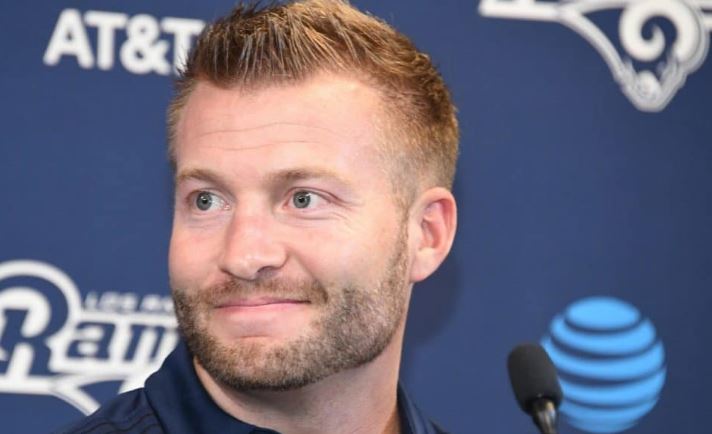 If you are a soccer fan, then you would surely like to read about Sean McVay who is a head coach of football and currently coaches the Los Angeles Rams of the National Football League (NFL). He is taken as the youngest head coach who got hired as a coach at the age of 30 in modern NFL history.

The 33 years old, Sean is engaged with Veronika Khomyn in 2019. Many of his fans and followers are curious to know about his on-going relationship with Veronika. From his long career, McVay has collected a hefty amount of money. Then, how much asset he has collected as of 2019? Let’s explore his personal and professional life in the below sections.

Born in Ohio, Sean McVay grew up under his Roman Catholic parents. His father, Tim used to defense back in football at Indiana University. Coming from a sports family, Sean’s grandfather, John McVay served as the head coach at the University of Dayton during the late 60s and early 70s. Also, John coached New York Giants in the 70s. His mother is Cindy McVay. Also, he has a brother named Ryan McVay.

Sean had also a deep interest in football from an early age. After his graduation in 2004 from Marist School, he went out with a Georgia 4A Offensive Player of the Year in his senior year. Following, he went to attend Miami University in Ohio. He participated in college football for three years and honored with the Athlete Award. He received a  B.S. in Health and Sports Studies in 2008.

The football coach for NFL, Sean McVay first started coaching under Jon Gruden with the Tempa Bay Buccaneers in 2008. Shortly after that, he coached Florida Tuskers. Later, he went to become a offensive coordinator for Washington Redskins after Jay Gruden promoted him.

After that, Sean joined Los Angeles Rams in 2017 and successfully become a head coach at the age of 30. With his expertise coaching, he led the Rams to Super Bowl LIII. Due to his performance in coaching, he also received the AP NFL Coach of the Year Award.

The 33 years old football coach, Sean McVay is neither married nor single as of 2019. He is engaged with his long-term girlfriend, Veronika Khomyn. His partner, Veronika is a famous Ukrainian Instagram star with over 20K followers. Also, she is active in the field of modeling.

The two of them started dating in 2016, shortly after being identified with each other. The couple took their relationship to the next level with an engagement ring on Veronika’s hand on 22nd June 2019. During the event, the couple was on the vacation in Cannes, France.

Looking at their together pictures, the couple seems to be loyal and understandable to each other. They are spending quality time together. Though they have not yet spoken about their wedding date in the media, they will surely announce everything in the near future.

One of the youngest football coaches in NFL, Sean McVay makes an excellent amount from his head coaching profession for Los Angeles Rams. While working as an offensive coordinator for Redskins, he used to earn $400 a year. In the year 2017, he signed a five-year contract for $2 million every year with Rams. Hence, he has an estimated net worth of $7 Million as of 2019 and earns a salary of $2 Million every year.

The head coach for Rams, Sean has a $2.7 million mansion in California. He lives with his partner, Veronika in the house. With no doubt, Sean is leading a lavish life with his family at present.

Find out more updates on AllStarBio.