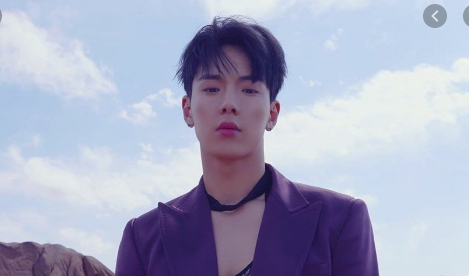 If you follow Korean music then you must be familiar with the personality we are talking about. He is a leader of a Korean pop Band, Monsta X. The eldest member of the Korean boy group  Son Hyun Woo is better known as Shownu.

Shownu is a passionate dancer and singer of K-pop group Monsta X. He is a tough-looking guy with a strong physique among the group of 7 members. The 27-year-old is currently single and fully focused on his career.

Shownu was born at the capital of South Korea, Seoul, on Jun 18, 1992.  He was brought up in South Korea by his parents, where he attended Donbonggu high school.

The singer got involved in music from his school days, where he, along with his friends, would sing karaoke for fun at Pub. His friends later motivated him to join singing shows.

Ultimately, Shownu joined an apprentice at JYP Entertainment and became part of the group Got7. Later, he started a career with a reality survival show created by Starship entertainment. The show involved 13 members, and after competing against one other, and the finalist formed a boys band group named Monsta X. The members are  Shownu, Minhyuk, Kihyun, Hyungwon, Wonho, I.M, and Jooheon.

The group further debuted with the Extended play record with a title track named Trespass on May 14, 2015. They are compared similarly to English Band One Direction, members  Zayn Malik, and  Liam Payne.

Is Shownu in a Relationship?

Shownu is currently single as of 2019. He is fully focused on his blooming career. It is either the Pop-star is good at keeping his love life private or else he actually is single.

Shownu’s name, however, was linked with an anonymous married woman.  On October 30 former Idol trainee Han Seo Hee uploaded two posts that linked the name of Shownu relation with a married woman. Later, the Starship Entertainment settled the allegation with an official statement dictating the 27-year-old  will not be involved.

The starship entertainment further expressed their view on behalf of Shownu.  They stated the lead singer is unknown regarding the anonymous women’s marriage. They added Shownu will not be seeing the women in the future and is not interested in getting involved in Lawsuit.

Nevertheless, the rumor made an impact in Shownu’s career since many raised questions on his cute boy image. He also received hatred messages from fans and audience after the allegation. Besides that, the rumor settled, and the group released their English song titled “Someone’s Someone” co-written  American pop-Rock band Before You Exit and Shownu.

How Much is Shownu’s  Net Worth?

Shownu has a total fortune of around $1 Million. He makes money from his career as a singer.

Regarding the group, they started their career on May 14, 2015, and still, they are able to gain huge popularity among fans around the world. They released numbers of songs and albums, which gained huge appreciations. More to that, they even made a huge sales:

Shownu, further with his band group, released the first studio album, The Clan part 1 Lost, making sales of $93,172 and the Guilty in January of 2016. Later the year followed by The clan pt.2.5: The Final Chapter Track It’s Beautiful, which earned $100,864.

The group did its first Japanese and world tour in 2016. Monsta X later did their second World tour with Are You There, which made sales of $240,385, followed by a third world tour in 2018 and 2019, respectively.  Eventually, the band received an official gold certification by Recording Industry Association of Japan for Japanese original song Spotlight, which made sales of$71,528.