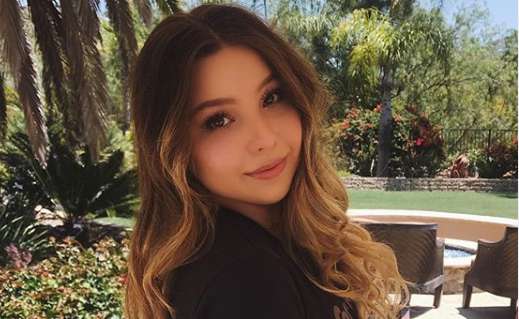 Sophia Lucia is an American dancer, actress, and a model, famous for appearing in the Lifetime series, Dance Moms. She graced the show with her incredible dancing skills leaving the fans in shock. With her amazing talent, she has won the hearts of million people throughout the world.

The rising star has 1.5 million fans on her Instagram account. So, let’s further know about her career and net worth.

Sophia Lucia was born on 2002 September 7 in San Diego, California. She has a brother named Vinny Lucia. She developed a keen interest in dancing from an early age of 2 and immediately started taking dancing classes at San Diego Dance Centre in Poway, California.

Her cousin, Kristin Hibbs is said to be the person to introduce dancing to Sophia. Sophia’s older cousin, Nicole Lucia is not only a dance lover but also owns a dance studio in San Diego named Dancology.

After a year, Sophia started competing at the age of 3 as she began taking part in local competitions.

When Sophia was 8 years old, she began attracting the attention of many producers of the reality show and among them were the producers of the reality TV, Dance Moms. Sophia made a debut appearance alongside her mother, Jackie Lucia on the third season of Dance Moms, 2012. In addition, Abby Lee Dance Company, behind the show, asked her to become the part of the show called “The Replacement Team”.

In such a short period of time, Sophia had already made a mark in the industry for herself. Later, she started appearing on shows like Dancing With The Stars, So You Think You Can Dance, Shake It Up, and America’s Got Talent. She also performed in the famous television show, Ellen Degeneres.

The little Sophia had grown so comfortable in the spotlight that she started taking steps in the field of acting as well. Firstly, she had small parts in the TV series, Kirby Buckets 2014 alongside, Jacob Bertrand, Cade Sutton, Olivia Stuck, and many more. Similarly, in 2015, she appeared in the Nicky, Ricky, Dicky, and Dawn.

Sophia’s first major role was as Sadie in the Hallmark Channel Christmas film, A Nutcracker Christmas which was released in 2016. Sophia is not only an actress and dancer but also an awesome singer. She released her first song, ‘Ain’t Gonna Play’.

In 2013, Sophia won the ‘Favorite Dancer 17, & Under at the Industry Dance Awards. Her major achievement throughout her career was to set a Guinness World Record for most consecutive pirouettes with a total of fifty-five on 30th of March 2013.

With her aspiring journey and great dedication, Sophia has become a model for California Kisses since 2012. She also won Junior Female Best Dancer at The Dance Awards in 2014. Likewise, she participated in the YouTube series “Teen Dance Challenge” and won first place.

Who is Sophia Lucia Dating Currently? Is She in a Relationship or Single?

Sophia Lucia is just 17 years old so it is hard to tell that if she is dating anyone or not at the moment. Sophia is too young to date somebody rather she is focusing on her career. However, rumor has it that she is dating Dylan Nalbandian.

As we can see both Dylan and Sophia posting pictures in their respective Instagram accounts, we assume that there is something cooking between them. Both are seen spending most of their time together and having fun to the fullest. However, Dylan and Sophia haven’t told anything yet about their relationship status.

How Much is Sophia’s Net Worth?

Sophia, with such a thriving career, has a net worth of $400 thousand as of 2019. She collected a huge amount of net worth through her dancing, music, and acting career. Despite an early age, she is sitting on the top of the great amount of wealth.

Not only her dancing career, but she also earns a hefty amount of net worth from her professional modeling career. Besides, her salary is still under the wraps as of now. Talking about her assets, she owns a Maserati car which costs 1.6 – 2.51 crore.