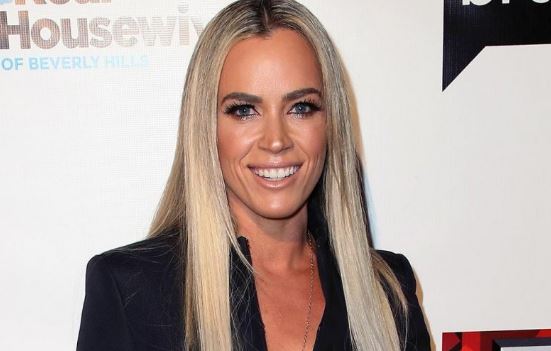 Teddi Jo Mellencamp is an American reality TV personality, model, social media influencer who also is an actress. In addition to this, she gained stardom as the daughter of the iconic singer, John Mellencamp and Victoria Granucci. Also, she appeared in ‘Real Housewives of Beverly Hills.’

This famous personality seems to have won the hearts of many fans from her appearance in the show and through her motivational Instagram posts. Not only respect, but she has also gathered an impressive figure of net worth, which is $12 Million in 2019.

Let’s discuss her biography in the lower sections.

Born in Bloomington, Indiana, Teddi Jo Mellencamp was raised in Hilton Head Island, South Carolina, along with her sister, Justice Mellencamp, after their parent’s divorce in 1986. She was born to her father, John Mellencamp, and mother, Victoria Granucci.

Teddi made a name for herself at a very young age as a competitive Equestrian. Starting at the age of four, she finally found herself competing all over the country with the venerable Don Stewart Stables. However, the American personality went a long way before officially starting her career in front of the spotlight.

At the age of 17, Teddi relocated to LA, and there she worked at Creative Artists Agency (CAA) and United Talent Agency (UTA).

Teddi Mellencamp’s equestrian career began at the age of three. As a result, she went on to become an accomplished equestrian and started competing all over the places with Don Stewart Stables. At the age of 17, she began her career as a fitness trainer. She was involved in coaching as an employee of CAA and UTA. Besides, Mellencamp holds a professional title of ‘accountability coach.’

Moreover, Teddi has a multimillion-dollar company called ‘All In by Teddi.’  She is a certified fitness/nutritionist coach and instructor. Above all, she entered Hollywood through her appearance on the famous reality TV show ‘The Real Housewives of Beverly Hills’ in its season 8 alongside Lisa Vanderpump, Kyle Richards, Erika Jayne, Yolonda Hadid, and many others.

Furthermore, Jo has also appeared on “The Wendy Williams Show,” “Home & Family,” and “Strahan & Sarah.”  In 2019, she made her first movie debut through her appearance in the family drama, “Next Level” as Mrs. Starling.

Teddi Mellencamp Arroyave is a married woman. She is married to her husband, Edwin Arroyave, on the 7th of July, 2011. Her present husband, Edwin, is a co-star in the show, “The Real Housewives of Beverly Hills”. Moreover, he is the founder and the CEO of “Skyline Security Company.”

The couple shares two children; a daughter, Slate, and a son, Cruz. They are expecting their third child (daughter). Teddi is also a step-mother to her 11 years old step-daughter, Isabelle Arroyave.

The couple resides in Hollywood Hills, Los Angeles, California, along with their children and their two adorable French Bulldogs, Porkchop and Havana, that they recently adopted. Their dog, Khaleesi, demised on December 2 that left the family heartbroken.

Also, Teddi and Edwin are constantly posting pictures on social media, admiring each other and showing their happy family. One can merely assume that The Arroyaves are one of the happiest families. Teddi opened up about her relationship with her husband. She said that they started because of a one-night-stand.  Now, the couple is head-over-heels in love with each other.

Before her marriage with Edwin Arroyave, Teddi Jo was married to Matthew Robertson. The former couple married in Bloomington, Indiana, on June 3, 2006, and soon ended their married life with a divorce.

According to Inside Weddings, the ex-couple met on a blind date that started with a miscommunication. Her wedding took place in John Mellencamp‘s property. Besides, John Mellencamp even performed at the reception.

Unfortunately, Teddi had to go through various IVF to bear her son, Cruz. She even revealed to have had many miscarriages in the past. Now pregnant, Teddi Jo claimed that her recent pregnancy to be the soundest.  She also revealed that she faces fluctuating weight throughout her life. And this being the main reason for her to get involved in the fitness line so she could help others suffering the same problem. And it seems she doing a great job as a motivator to other women.

Teddi Jo Mellencamp is holding a huge net worth of $12 Million. On the other hand, her husband, Edwin, also enjoys an equal amount of net worth of $12 Million as per the Celebrity Net Worth. Their businesses accumulated this fortunate amount. Edwin’s company is one of the authorized dealers of the Counterforce USA and has reached No.1 on their network. As of now, his company is the authorized dealer for Brinks Home Security.

Teddi and her husband reside in Hollywood Hills, Los Angeles, California. They bought their lavish house from Megan Ellison for $4.07 Million. They also listed their former house for sale for $3.2 Million.

Watch Teddi’s $4.07 Million House From Inside

To add more, Teddi’s husband, Edwin, drives a Lamborghini that costs around $369,989. As a former worker of CAA and UTA, she used to earn an average of $60K a year. Moreover, she works as a fitness coach for her website, ‘LA Workout Junkie.’ Thus, her average salary as a fitness instructor ranges between $35-$100 an hour.

Furthermore, her salary per episode for being a cast of  “The Real Housewives of Beverly Hills” is estimated to be $750,000 per episode. She sponsors for many brands so, we can assume that she is making good money from her various partnerships, sponsorships, and Instagram ads. Therefore, she is leading a lavish life with her family without any doubt.

Thank you for reading until the end. For more interesting articles, keep visiting AllStarBio.