1. Neymar from Barcelona to Paris Saint Germain for €222 million

At the young age of 25, the Brazilian footballer, Neymar left Barcelona and signed for the French giants, Paris Saint Germain with a transfer fee of €222 million. Playing under the shadow of the football great Lionel Messi, Neymar decided to leave the club.

Neymar has played 31 games, scoring 29 goals for Paris Saint-Germain since 2017. As of 2018, Neymar is named as the third highest paid footballer in the world, earning €81.5m ($95m) for a calendar year along with salary, endorsements, and bonuses.

2. Philippe Coutinho, from Liverpool to Barcelona for £142 million

The 25-year-old Brazilian midfielder, Coutinho completed his transfer from Barcelona to Liverpool for £142 million. As he signed for the Catalan side, Coutinho also became the world’s second most expensive signing after his Brazilian teammate Neymar. During his spell at Liverpool, he has played in 152 matches and scored 41 goals for the club and also won the Liverpool FC Fans Player of the Year Award in 2014-2015 and 2015-2016 season respectively.

3. Paul Pogba, from Juventus to Manchester United for €105 million

After proving himself as one of the world’s best central midfielders at Juventus, Paul Pogba moved to his former club Manchester United for then world record fee of €105 million. Since then, the Frenchman has also won the Europa League in the 2015-16 season. So far, the 24-year-old midfielder has smashed eight goals in 42 games for Manchester United winning the EFL Cup and UEFA Europa League in the 2016-17 season.

Great result, up to the next one 👊🏾 @manchesterunited #MUFC

So far, Paul has played 68 games netting 14 goals for Manchester United. His current market value is reported to be around €90 million as of May 28, 2018.

4. Ousmane Dembele, from Borussia Dortmund to Barcelona for €105 million

The French international footballer, Dembele was transferred to FC Barcelona with a transfer fee of €115 million for a five-year contract, with his buyout clause set at €400 million. After his signing, he became the joint-second most expensive player along with his national teammate Paul Pogba. Later, he was given the No. 11 jersey that was previously held by Brazilian international Neymar.

5. Gareth Bale, from Tottenham Hotspur to Real Madrid for €100 million

Honoured to have played 200 games for the best club in the world. @realmadrid

3 women stars who have endeavored to marry the maximum number of times! 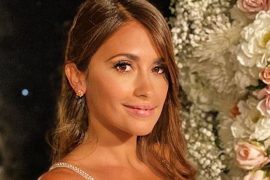