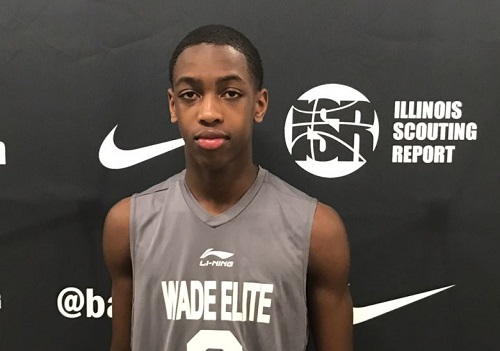 Zaire Blessing Dwyane Wade is an American basketball player who is currently playing for Sierra Canyon School. He is also famous for being the son of the former professional basketball player, Dwayne Wade. His father spent the majority of his 16-year career playing for the Miami Heat in the National Basketball Association (NBA).

Wade’s fans are curious to explore more about his personal life. So, is he dating anyone or single? Who is the lucky girl to be his girlfriend?

Zaire Blessing Dwyane Wade on 4th February 2002, in Miami, Florida, United States. Moreover, he is an American by his nationality and belongs to African-American ethnicity. Wade is the son of Dwyane Wade (father) and Siohvaughn Funches (mother). He grew up with his brother, Zion Malachi Airamis Wade.

Wade is the eldest grandson of Jolinda Wade, Dwyane Wade Sr. (from his father’s side), and Frank, Darlene Funches (from his mother’s side). He is a nephew of Kodhmus, Demetris, and Darnell McDaniel. Wade also has a half-brother, Xavier Zechariah, and a half-sister, Kaavia James Union Wade from his father’s second marriage.

Zaire started his career as a freshman playing for Mount Carmel High School in Chicago, Illinois at the age of 14. Later, he transferred to American Heritage School where he played basketball for two years.

On 29th May 2019, Wade announced that he would transfer to Sierra Canyon School for his 2019-2020 senior year in high school. Wade will also join incoming freshmen, Bronny James, son of the famous basketball player, LeBron James at Sierra.

How Much Is Zaire Blessing Dwayne Wade’s Net Worth?

Wade’s parents bought a house beside the Miami Beach, Florida, at the price of $10.5 Million. Their home features eight bedrooms and nine bedrooms on 13,086 square feet. Currently, Zaire is living a luxurious life relishing a hefty sum of fortune which he amassed from his successful profession.

Zaire Blessing Dwayne Wade isn’t married yet nor have a girlfriend as of now. But, his parents were a high school sweetheart. The couple first met in high school and fell in love at first sight. Later, they started dating each other. After spending some lovely time together, they engaged in 2000.

The lovebirds exchanged their wedding vows on 18th May 2002, in Chicago, Illinois. However, his father filed for a divorce in 2007, citing irreconcilable differences. Later, the court finalized their divorce on 25th June 2010 after a lengthy and acrimonious court battle.

After the divorce, Wade started dating Gabrielle Union, an actress in 2009. However, they split up early in 2013 due to career demands. Likewise, Wade and longtime friend, Aja Metoyer got romantically involved in a relationship. Later, they engaged in December 2013, and married on 30th August 2014, in Miami, Florida. Since then, the rest is history.