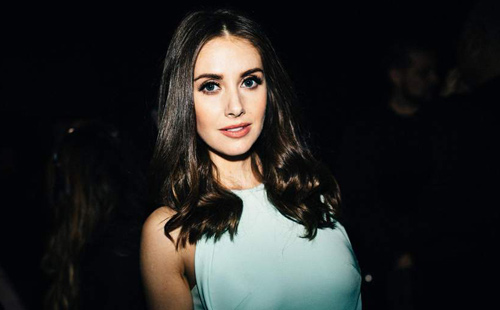 One time winner of Screen Actors Guild Awards, Alison Brie is an American actress known for her role as Annie Edison in the comedy series, Community and also in the drama series Mad Men as Trudy Campbell. In addition, the actress is better known for her role in the comedy series, GLOW as Ruth Wilder. For her role in the series, she was nominated for the Screen Actors Guild Awards, Golden Globe Awards, and many others.

Also, Brie has well maintained her professional life but how is her personal life. Is she married? Who is her husband? Let’s know about Brie’s bio, net worth, boyfriend and many others.

Alison Brie was born as Alison Brie Schermerhorn on 29 December 1982 in Hollywood California USA. As per nationality, Alison is American and belongs to white ethnicity. She is the daughter of her father, Charles Terry Schermerhorn, and mother, Jonanna Brenner. Her father is a musician and freelance entertainment reporter, whereas, her mother works for a non-profit child care agency called Para Los Ninos (“For the Children”). Bire’s mother is of Jewish while her father has Dutch, English, and Scottish ancestry. When Alison was a child, her parents got divorced.

The actress grew up along with her older sister named Lauren. Brie attended a Christian–Hindu hybrid church” called the Self-Realization Fellowship with her father. Since her childhood, Alison was interested in acting as she began her career performing in community theatre shows at the Jewish Community Center in Los Feliz.

Moreover, Alison went to the California Institue for the Arts. From there, she obtained a degree in acting. She further sharpened her skill at the Royal Schottish Acamedy of Music and Drama in Glasgow Scotland.

Is Alison Brie Married? Who is Her Partner?

The 36-years old Alison is a married woman. She got married to her long term boyfriend turned husband, Dave Franco. Her boyfriend is an American actor, is known for his appearances in several movies and TV series including Fright Night, Now You See Me and many others.

The couple met each other in New Orleans during Mardi Gras in 2011. The girlfriend and boyfriend immediately started dating and later commenced a relationship. However, the duo hid their romance from the media for almost four years. Alison and her partner made their relationship public when they made a joint appearance on the red carpet in June 2015.

It’s that time of year again, when my husband and I participate in the fundraiser to fight rare cancers called CYCLE FOR SURVIVAL. It is a cause that is very dear to us. We used to ride with our good friend, Brian Rozelle, as he fought the battle against a rare form of cancer…now we ride in his memory. Many people are still fighting. Please donate to my ride to help them in this fight. Link in my profile. Thank you. ❤️❤️❤️ #cycleforsurvival @cycleforsurvival #rozellestrong

The same year, the couple got engaged in August. After two years of their engagement, Alison and her partner got married on 18 March 2017 in a small ceremony. In addition, the husband and wife have disclosed that the two have not yet planned on having kids. Further, they have two cats, Harry and Arturo.

As the couple is enjoying each other company, there are no rumors of getting a divorce. Observing through her Instagram account, it seems like Alison and her husband are made for each other as they seem happy with each other. Furth the duo also attends several events together.

The estimated net worth of Alison Brie’s is $10 Million as of 2019. She makes an astonishing amount of wealth from her flourishing acting career. To date, Brie has performed in a number of movies and TV series so, she must have earned a pretty good name, fame and respect in the industry with her outstanding performances.

Although her annual income as an actress isn’t published yet, we can assume it to be in a good rank. Similarly, she has starred in famous movies and TV series since 2004. So as an actress, she might be paid the average Actor/Performer salary of between  $56024 to $85,000 per annum. Further, she is still active in the industry her net worth and salary will increase in the upcoming days as well.

Check out some of Brie’s movies box office collection with a total budget and the star casts;

On the other hand, Alison’s husband, Dave Franco’s net worth is $10 Million as of 2019. He collected a huge amount of net worth through his successful career as an actor, producer. As of now the husband and wife are living a lavish lifestyle. Moreover, the actress also collected some amount of money through her endorsements, brand promotions, and other monetary works.
Likewise, she seems to promote J A N I E, Kevin + Munjeeth, Malone Souliers, and many other brands. She also earns $1040 to $1733 per post as a social media endorsements from Instagram. So far Alison has posted 573 times and owns 820 k followers.

Alison’s age is 32 years as of 2019. The beautiful actress has well maintained her body figure and her body measurements include 35 inches-waist, 24 inches-hip, and 36 inches-breast. Likewise, she stands at a height of 5 feet 7 inches and weighs around 56 kg.

In addition, Brie has dark brown hair and has attractive blue eyes. Her shoe size is 7 US and her dress size is 4 US.

The beautiful actress, Alison has a successful career as she has played in several movies and TV shows. From her marvelous career and wonderful acting, she has won Screen Actors Guild Awards for Outstanding Performance by an Ensemble in a Drama Series from the show Mad Men.

Alison Brie Dave Franco. How to Be Single Scream 4 The Five-Year Engagement The Lego Movie The Post