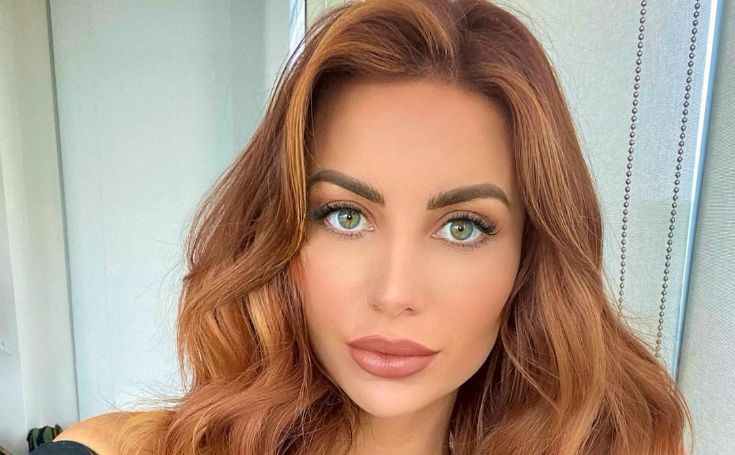 Also, she achieved stardom because of her amazing hosting skills in different TV shows, plus she is a businesswoman who owned the clothing line Active8 Wear.

Moreover, Mertz is a known face for different brands and a host for the news and lifestyle YouTube channel Rated Red, where she gained prominence for her woodworking videos. The model loves being fit and often goes to the gym.

And, the star updates her fans regarding her daily experience through her Instagram account. Scroll down and explore more about Amanda in detail.

The former Miss Kentucky, Amanda, came into this world as Amanda Ashlee Mertz on 21 November 1986 in Louisville, Kentucky, the USA, under the Scorpio birth sign.

Likewise, she was raised in a Christian family and belonged to the White ethnicity.

Similarly, she is the daughter of her father, Joseph Kelly “Jody” Mertz Sr., who had a tragic death in 2012 and her mother, Sandee Mertz Hutchinson, holds a job in the accounting office.

And, she grew up with her siblings Chasity Mertz Hobbs and Joseph Kelly Mertz Jr.

More than that, the TV host attended Assumption High School and later enrolled at the University of Louisville; she graduated with a master’s degree in nursing.

A Little Glimpse Into the Amanda’s Career

Professionally, Mertz was a nurse before she tried her luck in the entertainment industry. In 2012, she luckily won the beauty pageant, Miss Kentucky, which gave her huge recognition.

After that, she competed for Miss USA in the same year, but she lost the Miss USA title to Olivia Culpo.

Eventually, Amanda left Louisville and moved to Nashville for a modeling career. After signing various brands and projects, she became very popular.

Furthermore, the former nurse worked in NASCAR as an interrogator, and she has been active in the media field since 2012.

The 35 years old businesswoman is currently in a romantic relationship with her longtime boyfriend, Luke Pell. Pell also belongs to the glamour world and is an actor by profession.

The duo met one another for the first time back in 2017 and have been dating since then.

The pair shares a special bonding in the relationship and enjoys one another’s companionship to the fullest. They often upload one other picture on their respective social media account. In one picture, Amanda even wore a wedding dress with Luke next to her.

And fans from all around the world went crazy regarding the photo. But later, Amanda declared it was all a fake wedding shoot. Previously, she was dating Dustin Lynch.

What Rich Is Amanda Mertz?

The famous model, Amanda, has an estimated net worth to be more than $1.8 Million, which she earned from her modeling and hosting career.

At present, the beauty pageant winner is living a luxurious life with her earnings, and her active involvement in different projects has ensured that she will have growth in her income in upcoming years.

Further, the star is also the owner of the activ8wear, where she sells varieties of outfits to consumers.

Stay Connected To AllStarBio!!!, For More Biographies On Models And Beauty Pageant.