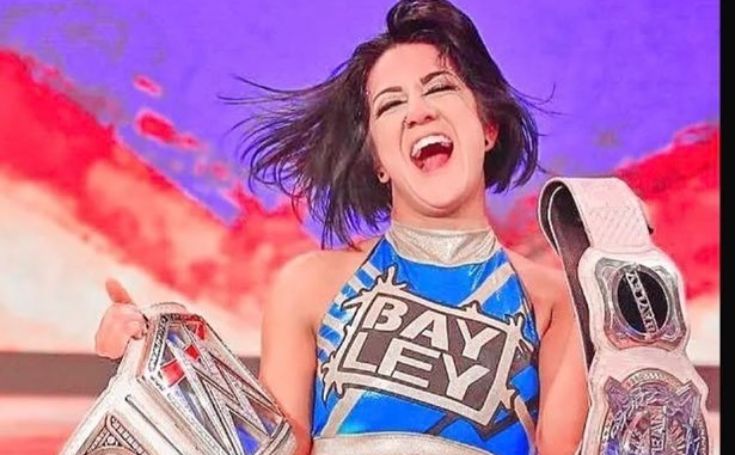 Pamela Rose Martinez is a professional wrestler from American who is currently signed to WWE performing on the SmackDown brand under the ring name Bayley. Moreover, she is a temporary producer with Tyson Kidd for the women’s roster.

Here we go into the biography you need to know about one of the famous WWE superstars Bayley Wrestler who has been in this show business for a decade and has inspired millions of people worldwide.

If you want to know more interesting facts about her personal and professional life, then we must say you have stumbled upon the correct page. So stay tuned with this article until the end.

The famous wrestler Bayley was born Pamela Rose Martinez on 15 June 1989, in San Jose, California, a city in the By Area, U.S. She was raised and grew up in San Jose in a Mexican-American family.

Unlike, the star hasn’t shared much regarding her family, siblings and early life. Additionally, she attended and graduated from Independence High School in San Jose and once played as a captain of the school’s basketball team.

Since her childhood, Bayley has been very keen on wrestling, and she still tells in every media that her parents are the biggest inspiration.

In the long journey, the 54kg WWE star has met many people who have been very close to her heart. Besides all of them, Sasha Banks is one of her closest friends.

They are very often seen together in every media. The two best friends support each other and travel to different places around the world.

Even, they are a tag team partner and also have won tag team titles together many times.

While Pamela was young, she was influenced by numerous superstars, including The Rock Lita, Randy Savage, Ivory, John Cena, Triple H, Bret Hart, Trish Stratus and many more.

After graduating high school, Rose was very obsessed with her fitness. So, she trained very hard to be a wrestler and attended Big Time Wrestling training with the Jason Style at 18years of age.

In September 2008, the star had her first match with Davina Rose, and after winning the match, she got the promotion to NWA Championship Wrestling from Hollywood.

Later in October 2010, Martinez tagged the team with the famous American Wrestlers Serena Deeb and debuted in Shimmer Women Athletes in October 2011.

In December 2012, the strong and hard-working athlete signed with WWE and made her debut in NXT in January 2013 live event under a mask. Later on 20 March, Bayley made her NXT television debut loss with the famous wrestler Saraya Bevis, known as Paige.

After that, Rose was at the height of her career; she wrestled with many WWE superstars, including Sasha Banks, Summer Rae, Alicia Fox, Akasana, AJ Lee and many more.

After defeating several superstars of NXT, Pamela became the number one contender for the NXT Women’s Championship in August 2015.

Then, she knocked out Sasha Banks to win her first NXT Women’s Championship Title on 22 August. Later, she celebrated her victory with Lynch, Charlotte, and Banks.

While the athlete was a champion of the NXT Women, she maintained her title with many contenders like Nia Jax, Carmella, Eva Marie, and Alexa Bliss.

After being 223 days champion holder, Rose lost her title with Asuka on 1 April at NXT TakeOver: Dallas.

As a result, the duo won that match and was challenged for Raw Women’s Champion against Charlotte. In a Clash of Champions, Charlotte defeated her in a triple threat match.

After that, without looking back, she was seen in many events such as Royal Number, Hell in a Cell, Survivor Series, WrestleMania 33, Payback, No Mercy, and many more, which aired all over the world.

Not to mention, Martinez is very fond of traveling; having an entertainment career, WWE often takes her to different countries to participate in various events.

Eventually, she posts her photo with her fiance Aaron traveling and hiking. Recently the wrestler was spotted at Eiffel Tower, Paris, France.

While she was in her leading career, Bayley characterizes herself as a hugger, and her entrance in the ring includes hugging many fans, especially younger children, in attendance.

Later, she earned her nickname as The Doctor of Huganomics. Alongside wrestling, Rose is a very passionate musician; sometimes, we can spot her singing and playing guitar in various concerts and shows. Recently, she opened the program with Neck Deep.

Relationship and affair with WWE Star

In her long professional career, the WWE Superstar’s name was attached to many WWE stars. But she never approved about it.

Later, she officially announced that she was dating WWE star Aaron Solow through her Instagram.

Moreover, the duo has dated each other for a long time and often post their vacation photos on their social sites.

The WWE pair first met back in 2010, and the lovebird confirmed that they were officially engaged in November 2016.

While Pamela was in NXT, she met Finn Balor, one of the talented wrestlers, promoted to WWE Main Roster alongside Bayley.

There were rumors that they were dating each other when Balor was injured. Rose cheered him by doing his theme and doing his entire entrance.

Later, Finn returns the favor by dancing with Bayley in Dirty Dancing. Even the rumored grew up higher when Balor posted his parents’ photo with Bayley.

The two-star haven’t confirmed their relationship, but they surely have a crush on each other.

Is Bayley a mother of 1 kid, or it’s just a rumor?

The WWE couple, Bayley and Aaron, has been in a romantic relationship for nine years. They have known each other for a very long period, and the good thing is that they were still happy with each other.

However, the lovely pair is not married yet but is engaged.

In 2015, Martinez uploaded a photo on her social site, including her and her fiance with a small baby. Then after the internet broke down with congratulating the duo.

But the matter of fact is that the little girl in the picture was only her family member who wasn’t her daughter.

How Wealthy is WWE star?

As we know, WWE superstars are some of the highest-paid workers in the world. Because of the global watching show and lots of sponsors, it is one of the world’s greatest entertainment shows.

So, it is clear that she surely earns decent money.

Her net worth hasn’t been estimated yet, but it is not denying that the star is living a very lavish lifestyle with her fiance.