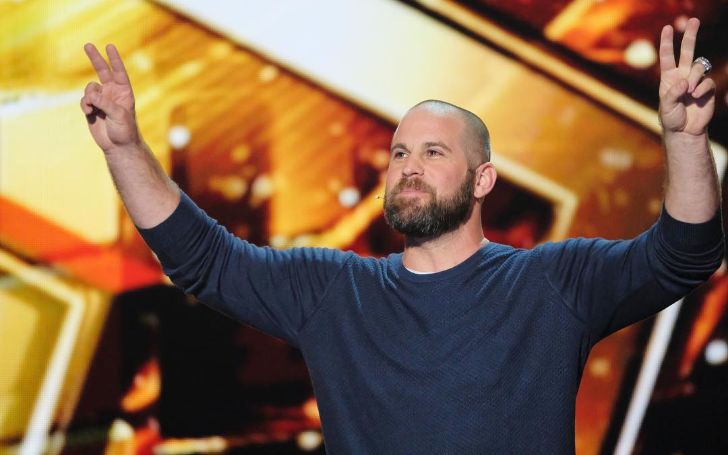 Aspire to Inspire before you expire! Jon Dorenbos is one of the inspiring and much-loved personalities. Please get to know him more on this page.

Who is Jon Dorenbos?

Jon Dorenbos, born Jonathan Paul Dorenbos, is a professional athlete, a finalist on America’s Got Talent.

Moreover, a regular on the ELLEN Show and a world-class speaker on Fortune 500 stages.

Precisely, He is a former American football long snapper and an elite magician. Unfortunately, Jon ended his football career after having an aortic aneurysm.

As a professional magician, he competed on America’s Got Talent and finalist on season 11.

Furthermore, He is the author of Life is Magic: My Inspiring Journey from Tragedy to Self-Discovery.

Jon Dorenbos was born on July 21, 1980, in Humble, Texas and grew up in Woodinville, Washington. His father is Alan Dorenbos, a software specialist.

Likewise, his mother is Kathy Dorenbos.

In addition, Jon’s father got sentenced to 13 years and eight months in prison as he murdered his wife, Kathy.

Jon went to Pacifica High School in California. After high school, He attended Golden West College and earned a business degree from Texas at El Paso in economics, finance and marketing.

An Inspiring Journey From Tragedy To Self-Discovery.

We recognize Jon Dorenbos as an NFL All-Pro or as an incredible magician who reached the finals of America’s Got Talent.

However, Dorenbos states that what he does is not who he is. He is someone who got forced at a young age to coach himself into turning tragedy into victory.

Later on, One fine morning in August 1992, Jon was up for a baseball camp, his father waved a goodbye. He subsequently heard the news that his father had murdered his mother in the family’s three-car garage.

Moreover, he had been an orphan. As a result, A 12-year-old orphan was thrust into foster care as his dad stood murder trial. Surprisingly, Jon came across an unlikely escape from loneliness performing magic tricks.

Fortunately, came a football that gave a release for all of Jon’s suppressed anger. Well-balancing magic and football saved him and led him to fourteen NFL seasons.

In 2017, New Orleans Saints traded Dorenbos, and he suffered from a deadly heart condition. He had two options, break down or bounce back. He chooses to bounce back!

Jon Dorenbos first started his career in football from high school through university. As soon as he finished college, Dorenbos signed a contract as long snapper by the Buffalo Bills.

Furthermore, He signed as an undrafted free agent following the 2003 NFL Draft.

On October 26, 2005, Dorenbos got signed by the Tennesse Titans and played in the last nine games of the 2005 season.

Furthermore, Fon was named to the NFC’s Pro Bowl team on January 20, 2010. He resigned from the Eagles and became the Eagle’s longest-tenured player. Luckily, Dorenbos signed a three-year,$3.395 million contract with the Eagles on November 18, 2016.

Dorenbos was traded to the New Orleans Saints for a 2019 seventh-round draft pick on August 28, 2017. Unfortunately, he was diagnosed with an aortic aneurysm. Consequently, he had to retire.

However, Coming to the point, the former footballer holds a networth of over $3 Million. All thanks to this football career.

In addition, As a professional magician, he has performed in Las Vegas, America’s Got Talent and Hollywood.

Moreover, he is a motivational speaker and has spoken for companies like The Home Depot, the National FFA Organization, Pioneer Investments, Jackson Hewitt, Comcast and ING Group.

On top of that, The magician has started his own business in Buffalo, New York, named DAC Framing. Since retiring from the NFL, he has been busy, and He is also active in the real estate realm.

Also, Dorenbos has sold his Huntington Beach townhouse for $1.15 million just two months after it hit the market.

Above all, Jon Dorenbos works with charities like Brian Moorman’s Punt Foundation, which helps children with terminal diseases, and Garth Brooks’ Teammates for Kids.

Who is Dorenbos’s wife? Know about his marriage.

The magician is married twice. His first marriage was with Julie Dorenbos. The ex pair met at a corporate event in Philadelphia in 2010.

In addition, Jon Dorenbos was a motivational speaker that time while Julie was selling annuities.

At the event, Julie was so moved by his speech that she emailed him, and Jon responded and asked her out for dinner. Time passed by, Julie and Jon took decided to marry.

The wedding took place in Philadelphia in front of 250 people at the St.Augustine Catholic Church. Moreover, they celebrated their honeymoon in Jamaica and St. Lucia.

Unfortunately, the marriage did not last long. Jon and Julie split in 2015. Luckily, Jon Dorenbos found love and is married now. As for Julie, She might be living a single life, as there are no updates on her, she stays away from the spotlight.

Dorenbos’s Second marriage and his kid.

The versatile Jon Dorenbos lives a thrilling married life. He is married to Annalise Dale. She is an executive casino hostess. The pair fell in love and dated for two years before marrying in 2017.

Jon and Annalise tied the knot in June 2017 in the picturesque town of Los Cabos, Mexico. Furthermore, the married couple went to Bora Bora for their honeymoon. Jon and Annalise are parents to a beautiful daughter.

They had their daughter in May 2019. Her name is Amaya Love Dorenbos. Jon Dorenbos expresses, Being a father is mind-blowing. It’s an incredible experience, and it puts everything in perspective.

The magic man keeps uploading pictures of his gorgeous wife and daughter on social media.