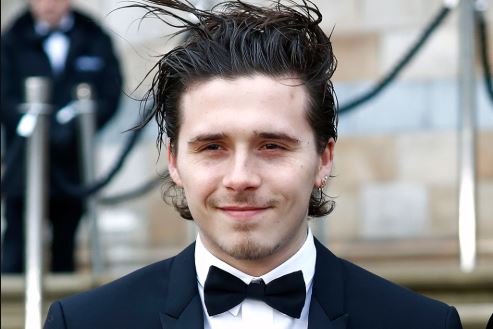 Being born in a celebrity family, your fame can get a leap. Likewise, Brooklyn Beckham rose to stardom as a celebrity son of David Beckham and Victoria Beckham. Moreover, Brooklyn is an English model and amateur. He is the eldest of four kids in the Beckham family. Beckham has appeared in several magazines as a part of his modeling.

Brooklyn dated quite a number of girls in his pasts. However, he is currently engaged with a daughter of Billionaire. Wanna know, who is Beckham dating as of now? If so then we suggest you read the whole article.

Brooklyn Beckham was born as Brooklyn Joseph Beckham on 4th March 1999 in Marylebone, London, England. He is British by nationality and belongs to white ethnicity. As said before he is the son of professional football player David Beckham and model Victoria Beckham. According to his mother’s 2014 biography Learning to Fly, he was name Brooklyn because he was conceived in Brooklyn, New York.

Beckham grew up in Madrid, Spain, when his father played for Real Madrid, and his father played for LA Galaxy in Los Angeles, California. Brooklyn is raised along with his three siblings. He has two brothers, Romeo James Beckham, and Cruz David Beckham, and one sister Harper Seven Beckham. Elton John, David Furnish, and Elizabeth Hurley are his Godparents.  He enrolled at Parsons School of Design and dropped out of New York University after one year.

Brooklyn Beckham played for the Arsenal F.C Academy however he left the team in 2015 after not getting a scholarship to remain with the academy. He started his modeling career in 2014 and has appeared on covers for Vogue China, T: The New York Times Style Magazine, and Miss Vogue. He was photographed by Bruce Weber, Daniel Jackson, Terry Richardson, and Alasdair McLellan.

Brooklyn Beckham, 21, has a net worth of $10 million as of 2020. He collected such fortunes from his multiple professions. As of now, he is an author, photographer, and social media influencer. As a model, he has appeared in several magazines and also he add some sorts of money several endorsements campaigns and advertisements. On the other hand, his parents has a combined net worth of $450 million as of 2020. His father is one of the popular professional football players whereas his mother is a singer and a model.

In addition, his father purchased a home for $3.3 million in 1999. Along with his wife, David bought a Beverly Hill house with six bedrooms, ten bathrooms for 18.7 million. Later in 2018, he sold the house for $33 million. Also, they have a $4 million worth house in southern France and a home in the fashionable Holland Park neighborhood of West London, worth $41 million. With such huge amount of money, Brooklyn enjoys a rich and luxurious life.

If you are regular followers of the Beckham family then you might know that Brooklyn is a social media star. He has over 12 million followers on his Instagram and most importantly this handsome hunk is taken. The man with a charming personality has been heartthrob of many young girls these days. But, sorry girls, the eldest son of David Beckham is already engaged with his girlfriend.

The 21 years old is reportedly dating Nicola Peltz, daughter of billionaire Nelson Peltz. The love birds started dating in later 2019 after knowing each other for some time. The love birds were engaged in the summer of 2020 which he shared via Instagram, captioning,

Two weeks ago I asked my soulmate to marry me and she said yes xx I am the luckiest man in the world. I promise to be the best husband and the best daddy one day, I love you baby xx

From this, we can say that the duo won’t take more time to get married, which probably the great news of all the Beckham fans. Isn’t the couple looks dashing together? Well, they have been highlighted as the best young couple in Hollywood.

Following his relationship with Nicola, he was previously in a relationship with Britsih model Hana Cross. The former couple started their relationship in early 2019. However, by the end of 2019, it was reported that the duo has already parted their ways. Besides, he hasn’t shared further information about their love life in the media.

He had a on-off relationship with American actress, Chole Grace Moretz. The duo dated in 2014 and was together for several years. Unfortunately, the two ended their long term relationship.