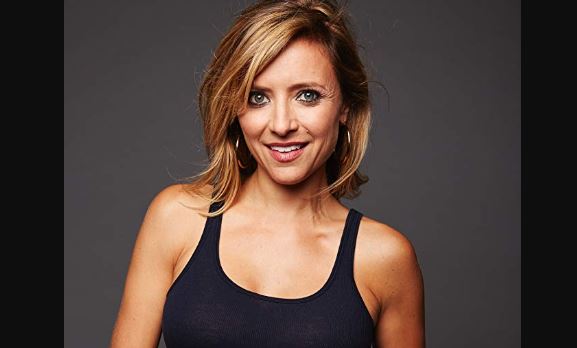 If you have ever watched the 1990s’ ABC/CBS sitcom, Step by Step, then you would probably be familiar with the role of Alicia Lambert which is portrayed by the American actress, Christine Lakin. She has also made her appearances in several films such as Dead Space: Aftermath (2011), Jewtopia (2012), Veronica Mars (2014), The Leisure Class (2015) and so on.

From her profession, Christine has collected a huge amount of money. Her net worth is around $2 Million at present. Apart from her professional life, she is a married woman. Not only this but she also shares two children with her spouse and posts a lot of pictures via her social media. Who is her husband? Let’s find out in detail about her life.

Christine Lakin was born to her American parents in Dallas, Texas, the United States. Her father is James Daley Lakin and her mother, Karen comes from a half Polish and half Czech ancestry. She grew up as a single child to her parents in Roswell, Georgia.

Christine had a deep interest in the entertainment field from an early age. So far, she has not talked about her educational background.

Christine Lakin first stepped into the entertainment industry through her appearances in the commercials. Following, she made her acting debut as Young Rose in the American drama, The Rose and the Jackal in 1990. After that, she received huge recognition after playing the lead role of Alicia Lambert in the TV series, Step by Step (1991-98). In the series, she starred alongside Patrick Duffy, Suzanne Somers, Staci Keanan, Brandon Call and many others.

The 40 years old actress, Christine Lakin is a happily married woman as of 2019. She exchanged her wedding vows with her long-term boyfriend turned husband, Brandon Breault in October 2014. Probably, the couple had a private wedding that was attended by their family and close relatives.

Her husband, Brandon is also a struggling actor in the American film industry, widely recognized for his works on An Inconvenient Head (2008), Razortooth (2007) and Jimmy the Saint (2017).

On 26th October 2019, Christine posted a picture with her husband wishing him their fifth marriage anniversary and also stated her love towards her spouse. She has also shared a lot of pictures of her kids via her Instagram. Currently, the family of four are residing happily in California, the United States.

Prior to her marriage with Brandon, Christine dated Andy Fickman for nine years and also was in a relationship with Jeff Juday. At present, she is free of rumors and controversies.

The American actress, Christine Lakin is active in the film industry since 1990. Over the past years, she has collected a hefty amount of money from her appearances in the films as well as TV series. She has an estimated net worth of $2 Million as of 2019.