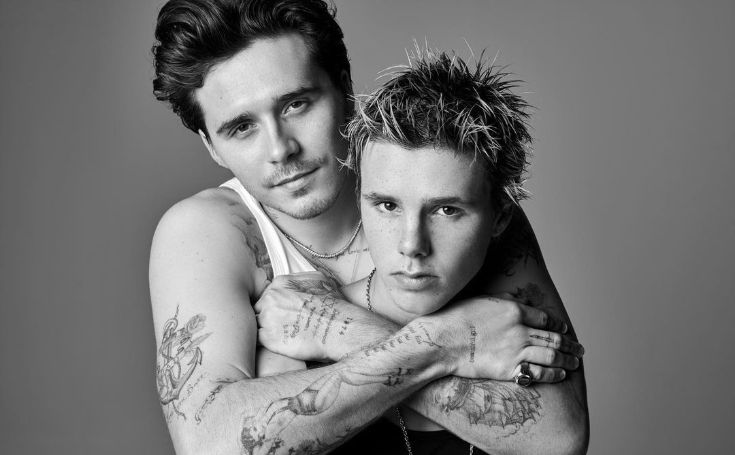 English Celebrity Child Cruz Beckham was born with a silver spoon in his mouth. The kid comes into the highlight as the youngest son or third born child of soccer star David Beckham and former pop artist Victoria Beckham.

Professionally, Cruz is an English Instagram star, and his dad, David, is a retired professional footballer who gained 19 major trophies in his two decades of a football career.

While his mother, Victoria, known as a member of the Spice Girls’ girl group.

To know more about his early life, parents, career, net worth, as well as the relationship, stay tuned to us until the end of this article.

Likewise, he is of British citizenship and belongs to white ethnicity.

In contrast, his mom is a singer and is currently known as a fashion designer, while his dad is a top-class footballer.

Similarly, he grew up in a perfect environment with his three siblings; two elder brothers named Brooklyn and Romeo and his younger sister Harper.

Moreover, his lovely parents named him Cruz, which means cross in Spanish. Talking about his academic qualification, he might be studying in middle school but has not mentioned his school’s name.

As per some sources, the kid attended Wetherby Preparatory School and pursued good education facilities.

Besides, he dressed up like an astronaut, or Wolverine, or a Transformer when he was a young kid who showed his interest in movies and their characters.

Growing up in a celebrity family, Cruz David Beckham is a cheeky kid of the Beckham family; his mama disclosed his different facts during his childhood days.

Once they all were learning sign language to communicate with a deaf friend, Cruz, a 5-years-old kid, desires to learn how to say I have gas. It’s pretty funny as well.

Meanwhile, he never minds being a model for his brother Brooklyn, an aspiring photographer. We can see different posts on his brother’s social media handles.

Also, the kid likes singing, and his parents keep on uploading his singing video, which catches the eye of Justin Beiber’s manager and wants to be Cruz’s manager.

Like his dad, he, along with his brothers, is very athletic and enjoys playing Soccer, and also has been trained with Arsenal’s youth teams at a younger age.

Nevertheless, his brother left to follow his passion, but Cruz is still interested in the game and plays for Arsenal Academy.

In addition to this, he is audacious and adventurous in games. Even David’s youngest son loves ice skating and often performs fearless stunts on a scooter.

Eventually, the star plays tennis or baseball matches along with his father.

Nonetheless, his social media handles caught the eye of many fans through his attractive clip and photos.

Also, his parents keep on sharing his activities on social media handles and one of his viral videos shared by his mum where Cruz was flying at ease from one ramp to another at a local skate park.

Furthermore, the lovely child is also recognized for singing and dancing. In August 2016, his daddy posted a clip of him showing several dance moves on his Instagram.

Seemingly, an Instagram star has also performed a breakdance at the Spice Girls’ reunion concert. Except that, his singing videos, caught by several renowned celebrities as well.

Since then, people started liking his singing skills.

In addition to this, he has correspondingly created his Youtube channel in 2016 and posted his first video titled Cruz Beckham – If Everyday Was Christmas (Audio) on December 9, 2016.

His other post, Cruz Beckham – If Everyday Was Christmas (Official Video), amassed over 4.3 million views. Besides, the kid has not been active on Youtube.

Apart from this, Cruz might be seen involved in numerous big projects growing up with his singing, dancing, and passion for sports.

Moreover, he donated all his earnings from his first single, If Every Day Was Christmas, to a youth charity, Make Some Noise, in the UK.

Also, when he launched his first single, reporter Piers Morgan criticized his parents for pushing their juvenile too early into the business.

The Intimate Ceremony Of Parents; David and Victoria.

Reflecting on Cruz Beckham’s relationship status, he has not been speculated to have a girlfriend until now. So far, he is probably too young to be involved in relationship matters.

Rather than dating games, the boy is more interested in singing and games and plays for Arsenal Academy.

Growing up young, junior David might be dating a beautiful girl with whom he can be paired.

Now, looking up to his parent’s relationship, his parent’s soccer player, David, and singer, Victoria, have been happily married for two decades.

Likewise, the duo tied their wedding knot on July 4, 1999, by the Bishop of Cork, Paul Colton, at Luttrellstown Castle, Ireland, attracted much media coverage.

Additionally, their son Brooklyn who was nearly four months old, served as the ring bearer during the event, and the groom David’s teammate, Gary Neville, served as the best man.

However, the two started dating in 1997; despite many rumors of affairs, divorces, and fights, they have dared the differences to their beautiful marriage of 23 years.

On their big day over two decades ago, the bride preferably wore the satin ballgown by Vera Wand while the groom dressed in a casual suit.

Afterward, the newlyweds wore the iconic matching purple outfits for their reception. More than 437 guests, including their family, friends, and close ones, attended the wedding reception, which was expected to have cost £500,000.

Before marriage, the lovebird announced their engagement in January 1998 following a two-year partnership.

On January 24, 1998, Mr. Beckham proposed to her at a restaurant in Cheshunt, England, and later both started dating in 1997 after the first meeting during a Manchester United match.

On March 4, 1999, his eldest brother Brooklyn Joesph Beckham first stepped into this earth and studied at the Parsons School of Design | The New School.

On July 10, 2011, Mr. and Mrs. Beckham welcomed their daughter or Cruz’s little sister Harper Seven Beckham was born and now studying at the Italia Conti Academy of Theatre Arts Ltd.

Nowadays, the family of six are living under the same roof along with their parents in Holland Park, London. While Brooklyn has recently moved to New York with his girlfriend turned finance Nicola Peltz.

Further, the lovebird was engaged in July 2020.

How Wealthy is Cruz Beckham?

The talented child, Cruz, is a rising star and a celebrity kid who has earned quite a considerable amount of money on his own.

Nonetheless, he lives a lavish lifestyle and his family in a Rowneybury House, which is nicknamed Beckingham Palace situated in Sawbridgeworth, Hertfordshire, England.

Additionally, his dad has several stylish cars that he can enjoy.

Therefore, his daddy David and mom, Victoria, share a more than $450 million combined net value. Mr. Beckham has made his fortune via his professional football career and various endorsement deals.

While Mrs. Beckham has earned her wealth throughout her work as a singer, fashion designer, model, plus businessman.

Moreover, a retired soccer player scored around $255 million during his final six seasons in the MLS with the L.Including wages, endorsements, appearances, income sharing, and licensing.

In addition to this, his annual revenue was about $50 million at Paris Saint-Germain, and he was retired in May 2013 after a 20-year career.

Over his entire career, David has played for various teams such as Real Madrid, Milan, Manchester United, Preston North End, the England national team, LA Galaxy, and Paris Saint-Germain. He works as a co-owner of Salford City and is President of Inter Miami CF.

On the other side, Caroline Beckham accumulated $75 million annually as a Spice Girls group. Not only this, but the lady has earned $70 million when Spice Girls reunited for their reunion tour.