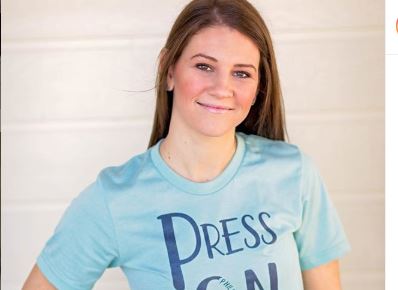 Have you heard about the first female quintuplets born in the US? If yes then you must be familiar with the Busby family. Well, the most powerful lady who gave birth to all those five daughters at once is none other than Danielle Busby.

Danielle created history in the US after she welcomed five daughters with her husband Adam Busby. Additionally, she became a popular name after appearing in TLC show Outdaughters with her family. So if you want to know about Danielle and how she handles her personal life stay tuned:

Danielle Busby was born on December 23, 1983, at Lake Charles, Louisiana. She was born to mother Michelle and a father whose name is not revealed yet. The 36-year-old Danielle didn’t mention her father’s name during the TLC show Outdaughtered. As of now, it is believed he died during the catastrophic hurricane that hit Texas in 2017. Danielle grew up in Lake Charles alongside her sisters Ashley and Crystal who happened to be twins.

Before being a popular name Danielle worked in a shopping store called Target and as a beauty consultant. It was the same shopping store where she met her husband. As per Adam, Danielle was always a southern girl with lots of confidence and humor.

Danielle married Adam Busby on July 22, 2006, in a small Chapel in Lake Charles. They met each other during the days when Danielle worked at a store called Target in her hometown. Danielle and her husband belong to the same place, Lake Charles in Louisiana. Apparently, it was her husband Adam who started stalking her from the start. Danielle had never thought that she would ever fall in love with Adam since he was quite weird during the initial phase of their meeting.

However, things started to get serious after they became friends and started spending time together. Ultimately after being friends and hanging out for a couple of months, Adam proposed her with a beautiful ring and coincidently it was her birthday that day.

Danielle shares six beautiful daughters with her husband Adam Busby. However, in the initial phase after tieing the knot with Adam she had never thought of ever being a mother. Since the 36-year-old faced the situation of infertility. The couple was in a depressing situation at that time however good news came when their doctor suggested them to conceive with a procedure called intrauterine insemination (IUI).

Despite trying the procedure  Danielle didn’t get pregnant for consecutive six times. Ultimately in the seventh time doctor gave good news about her pregnancy.

Subsequently, the couple welcomed their first child a daughter, Blayke Louise Busby, on April 5, 2011.  After the birth of their first daughter, they had planned to try conceiving again due to which she started taking a medicine named Femara. It is a drug that is used to treat infertility.

They received a positive test after just a couple of months of trying Femara. However, it was not an ordinary pregnancy, since the doctor gave them the news of quintuplets which means five children.

It is quite easy to imagine and far difficult to actually give birth to six children and maintain a good figure. However, that is not the case with the mother of six  Danielle. Despite being the mother of six girls the 36-year-old look fit and healthy. If you look at her current picture one cannot believe that this is the woman who created history by giving birth to Quantiuplets.

Additionally, Danielle regularly exercises and runs every morning. She also owns a fitness clothing line and wants to be an example to all the mothers. Her Instagram page shows pictures of doing cardio and light exercise with her friends. She also has an Instagram page which goes by the name CADI fitness where she frequently uploads pictures regarding fitness and motivations.

Danielle is an avid animal lover especially a dog. She showed her interest in the dog and how she loves them from her posts. Well, she owns a dog named Beaux Busby. Her social media shows how close she feels about the pet.

Moreover, she bought the pet for her daughters. The Busby daughters enjoy playing with their dog. She even created an Instagram account for the dog named beaux buzz. Surprisingly the account is followed by 57 thousand followers.

Danielle has a net worth of around $300,000 from her career. She is currently engaged in different fields to support her family. She works as a beauty consultant from where she earns around $25,000 in a year which is also an average earning in the US. Alongside her major source of income is from the TLC show out-daughtered where she earns $250,000 – $400,000 per episode.

Furthermore, she owns a store called Buzz up from where she earns thousands of dollars. Alongside this, Busby co-owns a fitness company by the name CADI fitness with her friend. She earns $10,000-$15,000 in a month from three Instagram account where she has massive followers.

Additionally, Danielle’s husband is believed to have a net worth of $4.5 million.  Also, he earns around $80,000 per year from her other works including account manager. Moreover, Adam started his own Adam Busby Media. The company involved with the creation of photo and video projects which range from the photography of family and large brands.

Adam also earns around $20,000 from his Instagram account where he has over 900 thousand followers. The family of eight enjoys a rich and lavish life as of now.