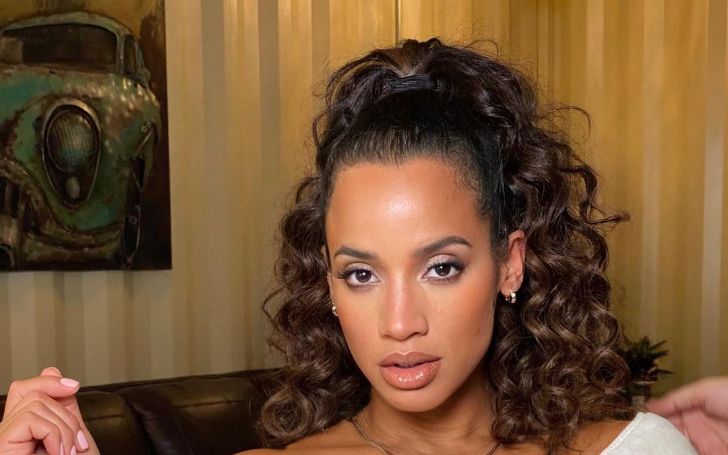 Dascha Yolaine Polanco, aka Dascha Polanco, is a leading Dominica- American actress who gets limelight after portraying Dayanara ‘Daya’ on the Netflix series Orange Is the New Black. Further, she has appeared on both small and big screens.

The veteran actress’ featured in numerous motion pictures, including In the height, Silm Gimme Shelter, Russian Doll, Orange is the New Black When they see us, and many more.

Most people know her well through her performances on television and movies, but what about her personal life? Is she married? Does She have a boyfriend? Or still Single? Let’s get right to it!

Talking about her early life, Dascha was born on 3rd December 1982 as Dascha Yolaine Polanco in Santo Domingo, Dominican Republic, into a traditional Catholic family under the birth sign Sagittarius.

Likewise, she is the eldest child of her mother, Janet Polanco, a cosmetologist and her father, Ruben Dario Polanco, a mechanic among two siblings.

Although the actress was born in Santo Domingo, she was raised in Sunset Park, Brooklyn, and Miami at a young age only, so she moved to America with her family.

And, she completed a bachelor’s degree in psychology at Hunter College and later worked in hospital administration at Montefiore Medical Center in the Bronx while studying nursing.

In an interview, she stated that she goes to the gym six to seven times a well. No wonder the star has an incredible figure at present!

Dasch began her acting career in 2011 and was recognized as the young Latin talent of Hollywood. Also, she is seen in different movies, TV shows, and songs.

The international audience applauded her appearance in the series Orange Is the New Black. And, she is still active in the acting industry and busy with her upcoming projects.

Besides the small screen, the Dominican-born actresses worked in big shows like Gimme Shelter, The Cobbler, Joy, MFKZ, The Irishman, etc.

The 38 years old, Dascha has been one of the popular people who has achieved a huge fan following. Consequently, her fans often get curious regarding her matter.

However, on the other hand, she loves to enjoy a low-life key.

Well revealing her current relationship, The In the Height actress is still single and was in a serious relationship with many of her boyfriends, but she never tied anyone.

To date, the star never revealed her past relationships and the name of her boyfriends in the media.

The Silm Gimme Shelter actress is a mother of two kids. At a very early age of 17, she became a mother from her high school boyfriend relationship.

After some while, she became the mother of a son, Aryam, from her other boyfriend at 25. The heroine managed to be a single, independent mother of two children.

How Much Net Worth Does Polanco Have?

The 5ft 5 inches tall and bold lady is estimated to have around $5 Million through her acting and other commercials ads. And, her TV and movie credits have provided her good income and luxurious life.

And, she has received a Guild Awards-Outstanding Performance by an Ensemble in a Comedy Series for continuously three years 2014, 2015, and 2016.

Currently, she is involved in the post-production of the upcoming American superhero film Samaritan and is still active in her acting career, earning good fortune. As estimated, Dascha makes around $75,000 per annum.

Follow AllStarBio, For More Interesting Articles On Your Favourite Actresses.