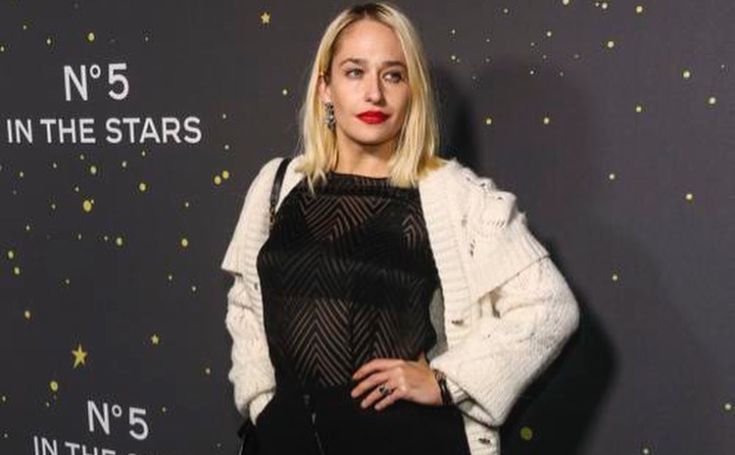 Jemima Jo Kirke, aka Jemima Kirke, is an English-American artist, Actress and director who came to the limelight after appearing in the HBO series Girls (2012-2017), portraying the character of Jessa Johansson.

Furthermore, she is also known for her performance in movies like Girls, Tiny furniture (2010), Untogether(2018), Girls- season 6 and many more.

Also, the Actress has TV credits with shows like Girls, Conversation with Friends, Axe Cop, etc. Read all the articles to gather all the info about the prominent Actress.

Who Is Jemima Krike? Her Bio.

The famous artist was born Jemima Jo Kirke on 26 April 1985 in Westminster, London, the UK, to her father, Simon Kirke, a famous drummer, and her mother, Lorraine Kirke, the owner of the vintage boutique.

And she has two sisters named Lola Kirke and Domino Kirke. Penn Badgley is her brother-in-law, and Jack Dellal is her maternal grandfather. Gaby Dellal and Jasmine Dellal were her maternal aunt. Her cousins are Harley Viera-Newton, Charlotte Olympia Dellal and Alice Dellal.

Although Kirke was born in London, she was brought up in New York and studied at Saint Ann’s School in New York.

Later enrolled at Rhode Island School of Design for further study and graduate with a Bachelor of fine arts.

During her school time, she was a friend of Lena Dunham, and their friendship helped her get her first-ever applaud role in the HBO series Girls (2012), which gave her international recognition.

Then she starred in different TV shows and movies.

The stunning Actress has gathered immense popularity through her wonderful talents. So, many people often admire her personal life.

However, the director rarely opens about her relationship in the front line. Despite that, the girl is proud to present Alex Cameron as her boyfriend.

Well, Alex is an Australian singer-songwriter who has a good vocal range and soothing tone. Taking a glimpse into their love life, they started their sweet relationship back in 2017, announcing it through their respective social media account.

Further, the duo often uploads one another pictures in their respective Instagram handle. The pair flaunt their relationship in public and share good chemistry.

Jemima is a big tattoo lover and has over twenty tattoos on her boy, believing that tattoos are art, including number, halo, skull, skeleton, etc. You can review her tattoos on her Instagram account.

Divorced With Ex-Husband and Sharing of Two Kids

Before dating Alex, she married a lawyer, Michael Mosberg, in 2009, and the former couple welcomed a beautiful daughter, Rafella Israel, in 2010.

After a while, the ex-duo, blessed with a baby boy in 2012, named Memphis Kirke.

Notwithstanding, being parents of two kids, they decided to live separately and legally divorced in 2017. Since then, Mosberg has strayed far from the limelight and enjoys a low-life key in his way.

How rich is Jemima? Know about her net worth.

The 36 years old, Girls actress is one of the popular and richest stars in England. Ans, she estimates to have more than $1.5 Million as of early 2021.

Also, she accumulated a good income as she has been working continuously since 2005.

Moreover, some of her starred movies and series are Sylvie’s Love,  Sex Education, High Maintenance, Tiny Furniture, and so on.

Also, she has appeared in the Music video of Dusk Till Dawn and many songs of her boyfriend. Additionally, she earns around $85,000 per annum through all of her projects.