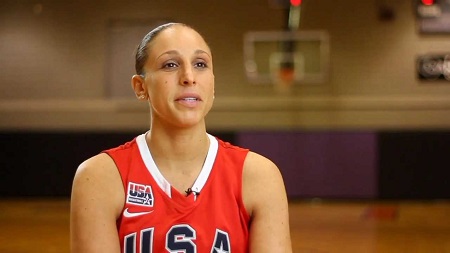 Diana Lorena Taurasi a.k.a. Diana Taurasi is an American professional basketball player currently playing for the Phoenix Mercury of the Women’s National Basketball Association (WNBA) as well as UMMC Ekaterinburg of Russia.

Currently, her current net worth is reportedly around $1.7 million and an annual salary of $500,000, from her present club. Moreover, she is married to her girlfriend, Penny Taylor. The couple has one child.

Who is Diana Taurasi? Bio

A native of Glendale, California, Diana Taurasi was born on June 11, 1982. Her star sign is Gemini. By nationality, she is an American and belongs to the white ethnic background.

Her father, Mario who was born in Italy, and raised in Argentina, was a professional footballer in Italy as well as played for several years as a goalkeeper. On the other hand, her mother, Liliana, is Argentinian. Her parents emigrated from Argentina to the United States before Diana was born. She has an elder sister named Jessika.

She enrolled at Don Antonio Lugo High School where she played basketball for the school team. Upon graduation, she enrolled at the University of Connecticut (UConn). There she joined women’s basketball team during the 2000–2001 season. Overall, she averaged 15.0 points, 4.3 rebounds and 4.5 assists per game in her collegiate career.

In the 2004 WNBA Draft, Taurasi was selected first overall by the Phoenix Mercury. She still plays for the team and has earned 3× WNBA champion, 2× WNBA Finals MVP, 9× WNBA All-Star, 10× All-WNBA First Team, and WNBA Rookie of the Year (2004).

Diana Taurasi is openly a lesbian. Further, she is married to her long-time partner, Penny Taylor, an Australian retired professional basketball player who currently stands as an assistant coach of the Phoenix Mercury.

The couple tied the knot in May 2017, after dating for a while. On their wedding day, Taurasi wore a white suit while her spouse flaunted on a beautiful sweetheart neckline gown.

On March 1, 2018, the duo became parents after Taylor gave birth to son Leo Michael Taurasi-Taylor. The family of three is living a blissful life. Taurasi often shares pictures via her Instagram.

How Much Is Diana Taurasi Net Worth In 2019?

As of 2019, Diana Taurasi has an estimated net worth of $1.7 million, mostly earned through her basketball career. Further, she makes $500,000 per annum as salary. Additionally, she adds a decent sum to her net worth through an endorsement deal with various brands, including Nike and JBL USA.

In 2014, she purchased a house in Manhattan Beach worth $3.3 million. The home has three bedrooms, three full baths, and 2,040 square feet of living space.