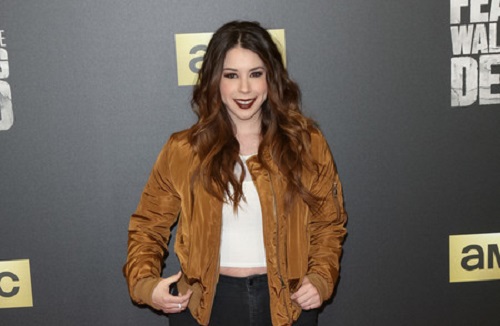 Jillian Rose Reed is an American actress credited for portraying the character of Tamara Kaplan in the TV Show Awkward. In the show, Reed appeared alongside Ashley Rickards, Brett Davern, and Greer Grammer. The actress worked in movies as well including Age of Dinosaurs, Confessions of a Womanizer, and many more.

Reed started working in the industry in 2008 and in this one decade of her career, she has accumulated a good fortune. Reed is the sibling of Robbie Tucker and Matthew Reed. To find out more information about Reed, scroll below.

Who Is Jillian Rose Reed? Her Bio And Siblings

Jillian Rose Reed was born on 20th December 1991, in Hollywood, Florida, USA. Her parents are Rob Tucker and Lisa Reed-Tucker. She was born under the sun sign Sagittarius. Reed grew up alongside her siblings Matthew Reed and Robbie Tucker in Coral Springs, Florida.

Her brother Robbie is an actor and has appeared in movies like Family Weekend, Prom, Losing Control, Shuffle. Jillian was a performer from an early age and she participated in the Dance competition as well. There is no information about her educational background.

Reed started her career in 2008 appearing in the dark comedy-drama series Weeds. Jillian was at the regular cast of the show for one year and moved to another series, MTV’s Awkward in 2011. The show made her very famous and is still her most notable projects.

Reed won a Young Artist Award nomination for Best Performance in a TV series for the show. The show followed the life of Jenna Hamilton played by Ashley Rickards and Jillian played her best friend, Tamara Kaplan. Besides them, the show also featured Beau Mirchoff, Molly Tarlov, Nikki DeLoach in the main role.

Following her success with the show, in 2012 Reed starred in My Super Psycho Sweet 16: Part 3. It was a TV film and Reed portrayed the role of Sienna Brooks. In 2014, Reed played in the movie Confessions of a Womanizer alongside Andrew Lawrence and Gary Busey.

Most recently in 2018, Jillian appeared in the movie Sharon 1.2.3., one episode of Lucifer show, and also in a web series Love Daily.

As per reports, Jillian Rose Reed is currently dating a guy. There are a lot of pictures of them in her social media. Jillian and her boyfriend are together for seven years and still going strong. However, there is not much information about her boyfriend but it looks like the couple will soon tie the wedding knot.

Seven years of being your Valentine, and a million more to go ♥️ Its no surprise Marty and I are pretty casual, so for this Valentines Day, we’re planning on staying in! Good food, lots of cuddles, and the perfect pair of matching undies from @meundies ♥️ Have you started V-day planning yet? What’s on your agenda?!#meundiespartner

Reed is focused on her career and there are no reports of her past affairs as well. Besides acting, Jillian uses her celebrity status for a good cause. Jillian is part of the American Diabetes Association after her brother Matthew suffered from it.

Reed uses her social media platform to advocate about it and in an interview she said,

A lot of people think diabetes isn’t one of those things that can happen to you. With the success of Awkward, I did have a voice. I can say something and people will listen, I can use social media and not just to tweet pictures of my cat.

What Is Jillian Rose Reed’s Net Worth?

The estimated net worth of Jillian Reed is $2 million as of 2019. She earned such a hefty sum of money from her to her decade long career in the entertainment industry. Her notable show Awkward is a hit MTV show and from the show, she must’ve earned a good salary.

Likewise, Reed travels with her friends and family to different locations on her vacations. Jillian lives in California with her boyfriend which is an expensive city. Reed and her boyfriend earn more than $50,000 per year which allows them to live comfortably in California. Jillian has 453K followers on Instagram and from there she earns about $700 to $1000 per posts.