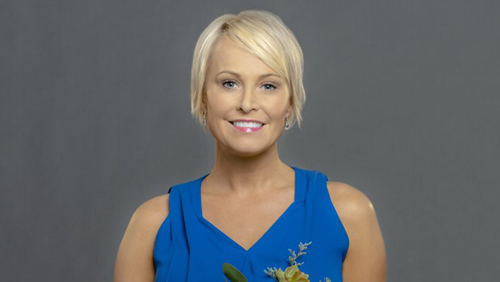 Jolyn Christine Heutmaker is an American actress famously known among the fans as Josie Bissett. Josie is credited for her role in Melrose Place, Operation Chromite, Christmas With Tucker, Pregnant at 17. Bissett started her career in 1989 with the movie Hitcher in the Dark.

This 5 feet 5-inch actress is married twice and recently in 2017 with Thomas Doig. Josie is the mom of two beautiful children. Find out more about Josie’s Husband, Children, Movies, and Net Worth below.

Who is Josie Bissett? Her Bio and Age

Josie Bissett was born on October 5, 1970, in Seattle, Washington, USA. She was born with the zodiac sign of Libra. Josie was born to her mother Linda A. Bissett and her father Joseph E. Heutmaker. Bissett is of American Nationality and belongs to Mixed Ethnicity (German, Austrian, Irish, Dutch). She is currently 48-years-old.

There is not much information about her educational background. Josie was interested in acting from an early age. She appeared in front of the camera at the age of 12 for print advertisements and TV Commercials. Josie did not continue her regular school and moved to Japan at the age of 16.

After working in Japan, Josie moved back to the US to start her career there. Josie started her tv role in The Hogan Family in 1990s. Bissett notable role came in Melrose Place where she appeared as the fashion designer.

Josie appeared in other TV Shows like The Fire Above, Dare to Love, Deadly Vows, Baby Monitor: Sound of Fear, I Do they Don’t. Bissett worked in the film The Other Woman adapted from the Joy Fielding novel and directed by Jason Priestley. After starring on Television in 1990, Josie made her debut in movies in 1991 with The Doors. The movie was directed by Oliver Stone.

Honored to be filming my scene as the amazing Jean MacArthur #OperationChromite W/ #LiamNeeson (The kindest man one would ever meet) as General Douglas MacArthur in South Korea. An unforgettable experience. THANK YOU to my friend and producer Kyu Lee @qflava & the incredibly talented director @johnhleefilms

Besides this, Josie advocates for breast cancer and has raised money for the cause which shows her beautiful soul to help others. In 1997, Josie was the spokesperson for Lee National Denim Day and helped raise money for Susan G. Komen Breast Cancer Foundation.

Besides being an amazing actress, and working for the cause, Josie writes a book for the children. Bissett co-edited books Little Bits of Wisdom and Making Memories which is about parenting. Josie published a children book in April 2008 named Tickle Monster.

Bissett married actor Rob Estes in 1992. The couple met on the set of Melrose Place and started dating for a while. Soon, in 1992 the couple got married and welcomed two children. Her son, Mason Tru Estes was born on July 21, 1999, and her daughter Maya Rose Estes was born on April 14, 2002.

Josie was pregnant with the first child in 1996 when she was filming Melrose Place but due to miscarriage Bissett lost her baby. Bissett and Rob got separated in 2006 but the reasons for her divorce is not known.

Later in 2017, Josie married Thomas Doig in 2017 and the relationship is going strong as there is no news of separation.

What is Josie Bissett’s Net Worth?

The estimated amount of Net Worth of Josie is at $3 million. Josie made this fortune with her hard work in the movie industry. Bissett has worked in numerous films and tv shows which has made the earnings of more than $100 million. From the profit of these movies, Josie must’ve also earned a good income.

Josie spends most of her free time with her teen daughter and husband in Washington. In today’s price, the home cost more than $400,000. Josie travels with her husband in exotic locations and for her honeymoon, she went to Singapore.