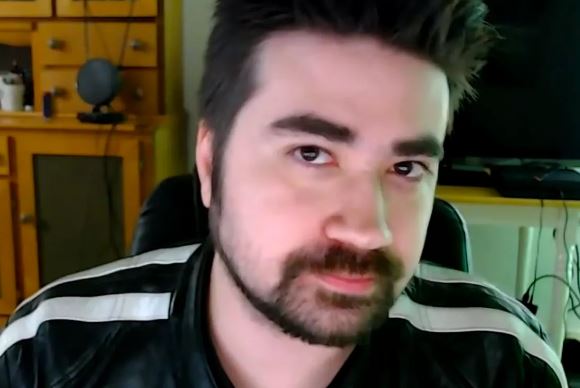 It’s the representation of his character Angry Joe who plays games and also gives reviews of different movies.

As a matter of fact, Joe has collected 3.21 million subscribers on his YouTube channel at present. Indeed, you would like to know more about Angry Joe before fame, YouTube earnings and his girlfriend as well. Find out all the details in the article below.

The dashing man, Joe Vargas, was born Joe Antonio Vargas on June 18, 1984, in Austin, Texas, the United States. Likewise, he has Puerto Rican ancestry. In contrast, on July 5, 2017, he attended the Independence day parade with his father and grandfather.

Moreover, they look thrilled, with no denial. Sadly, there is no further information about his siblings or education upbringing. But on May 13, 2018, Joe tweeted:

Guys, please tell your Mother & Father you love them. Will you? If they’re mad at you or you are at them, find a way to forgive. Trust me; you never know just how much time you have w/them. Do something nice tomorrow 4 Mother’s day no matter how small & same 4 Father’s day, okay?

The tweet looked alarming, but still, it was clear how much he cared about his family.

In October of 2008, Joe launched his YouTube channel, The Angry Joe Show, by uploading his first video called S**t that Pisses Me Off- Madded 2009 Hardcore Gamers on October 4, 2008.

Likewise, the character portrayed by Vargas himself, called Angry Joe reviews video games and movies on a scale of 1-10 using sketch comedy. As of December 2019, the channel has gathered over 3.21 Million subscribers and has over 1 Billion views in total.

The 35-year-old YouTuber has about 1,680 videos on his channel. As well as he is active on social media like Twitter and Facebook. Furthermore, he has almost 351k followers on Twitter and has more than 40k Tweets.

As of April 21, 2022, Joe Vargas is leading a single life. However, in the past, he was in a relationship with fellow YouTubers, gamers and Twitch star, Purrluna. The couple were pretty private about their relationship and hardly posted on social media.

Additionally, Mr. Vargas was ten years older than Purrluna. Also, the two maintained a long-distance relationship since Purrluna was a resident of Sweden.

Besides, the lovely couple met on the internet and the guy used to pay for her trip when she would come to visit him in Texas. Unfortunately, they separated on November 9, 2016, and later, Joe was never spotted with any other girl whom he could be dating.

As mentioned above, Joe Vargas’ channel Angry Joe Show has amassed over 3 million subscribers and 1 Billion Views. Similarly, his earnings per video are around $2,400, and he frequently posts weekly videos on his YouTube channel.

So far, in a year, the fellow posts about 52 videos and the average views he gets in a video range from 500k to even 1.2million. This makes his yearly earnings and estimated net worth around $900,000–$1.2 million like another Twitch Star, Jow Vargas.

Apart from this, Joe Vargas was a former team member at Taco Bell; from his work there, he must have earned around $31,200. Hence, there is no denying that the good-looking man leads a luxurious life with his family, which can be easily glimpsed through his posts on social media.