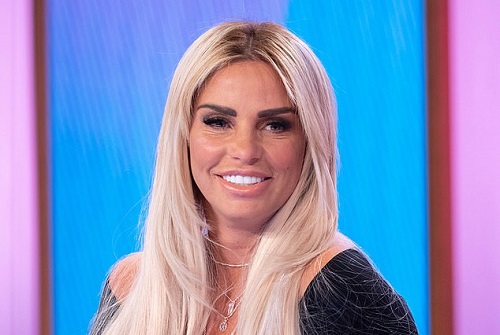 The winner of the fifteenth series of Celebrity Big Brother, Katie Price is an English media personality, model, author, and businesswoman. She began her modeling career at the age of 18 and appeared in several magazines like Playboy, Nuts, Vogue and Esquire. Not only that, but Price was also a contestant on the third series of I’m a Celebrity…Get Me Out of Here!, a reality television series.

Katie, the former glamour model is married three times. However, all of her marriages ended with divorce. What is the current relationship status of Price?

Katie Price was born on 22nd May 1978 in Brighton, East Sussex, southeast England. She is the only child of Ray Infield and Amy Price. However, her father left her mother when Katie was four. Later in 1988, her mother remarried Paul Price.

Growing up Kate spent her childhood along with her older half brother Daniel and younger half-sister Sophie. Further Price went to Blatchington Mill School. During her childhood, she excelled at swimming and featured for Sussex in regional competitions. Katie further had an interest in horse-riding during her childhood.

Who Is Katie Price’s Husband? Know About Her Children

Katie Price is married three times. Firstly, she got hitched with her boyfriend turned husband Peter Andre. Her former husband Peter is an English-Australian singer, songwriter, businessman and television personality.

They tied the knot in September 2005 at Highclere Castle, Hampshire. Together they share a beautiful daughter, Princess Tiammi Crystal Ester Andre born in June 2005. However, after being together for 4 years the former husband and wife announced their separation.

After the divorce with Peter, Katie began dating MMA fighter Alex Reid in 2009. The couple married on 2nd February 2010 in a private ceremony in the Wynn Hotel in Las Vegas. Likewise, Price and her partner Alex formally married in a church in the UK.

Moreover, their wedding ceremony was further recorded for her TV series. Nevertheless, they separated in January 2011.

Their wedding ceremony took place at the Sandals Royal Bahamian Resort and Spa in the Bahamas. In addition, the former couple shares two children together. Their kids are Jett Riviera Hayler, born in August 2013 and Bunny Hayler, born on 4th August 2014. However, the couple failed to continue their relationship and parted their ways.

Prior to her marriages, Katie further dated Dwight Yorke, a former footballer. With Dwight, she shares a child, Harvey Price born in May 2002. However, her kid Harvey is blind due to Septo-optic dysplasia.

As Harvey grew up, Katie found him suffering from the autistic spectrum (a range of mental disorders of the neurodevelopmental type).  Moreover, he gained weight because of Prader–Willi syndrome and faced difficulties in walking.

After her third unsuccessful marriage, Katie is in a romantic relationship with Kris Boyson. The couple met each other through former Love Island star Rykard Jenkins in early May 2018.

Observing Katie’s Instagram account we can see that the couple is enjoying each other’s company and living a happy life. As of now, the couple is sharing a healthy relationship. Furthermore, they also spend quality time with each other.

FiFi Awards winner, Katie Price underwent treatment of leiomyosarcoma on her finger. She went to Nuffield Hospital near her Brighton home to remove the cancerous tumor. Likewise, in December 2017, the beautiful actress underwent surgery in the United States to reduces the size of her breast implants and also had Rhinoplasty (a plastic surgery procedure for correcting and reconstructing the nose).

Price was not happy with the result of her breast implants so she returned to Beverly Hills, California in July 2008 for corrective surgery. She returned to the United Kingdom with a much smaller size of 32c breasts.

In an interview in February 2018, Price told that she is consuming cocaine for about six months as a consequence of stress in 2018. Moreover, she also said, she willingly entered addiction treatment at The Priory (a private mental health hospital in South West London.)

Katie Price has a net worth of $1 Million as of 2019. Though her current net worth is $1 Million, her wealth was $41 Million before she became insolvent. She faced bankruptcy but she got granted three months to pay off her debts which were reportedly more than $445,000 some of which she owed to tax.

According to The Sun, on 15th August 2018, she asked her former husband Andren for financial help. Later the sources reported that Price was going to sell her $3.6 million home. In addition, she also tried to raise money by selling her breast implants, underwear and old clothing, two days after appearing in court.

Moreover, the former glamour model was charged $2300 fine and banned from the roads for three months.

Massive day tomorrow back in court regarding my pink baby that @dannyscustompaint fixed up for me. Whatever the outcome I’ll continue to be my new positive self ?

The main source of her income is from her successful career as an English media personality, model, author, and businesswoman. Among her various business ventures, Katie also launched clothing/accessory lines and also involved with various charities.

The former glamour model is the number #1 reality TV celeb in the U.K. As of now, she is living a luxurious life in her multi-million dollar home. Moreover, she owns luxury cars, and high-breed horses.

In Septemeber 2009, Katie Price claimed that she was raped by a famous celebrity but had not reported the incident. Further, Price declared that she will never reveal the name of the attacker. Thus, no allegation of rape was made.

Similarly, in January 2019 Price was restricted from driving for three months after breaching the circumstances of the past driving ban on speed.

In August 2008, Katie successfully avoided bankruptcy after a High Court hearing was adjourned to give her three months to pay off her debts, allegedly totaling more than £250,000, almost a quarter of which is a tax. At that time Price did not attend court but submitted a proposal for an Individual Voluntary Arrangement.

In 2001 UK General Election Katey stood as an independent candidate in the Stretford and Urmston constituency. At that times she gained 713 votes. Unfortunately, she did not win the seat but Labour’s Beverley Hughes won it with 23,836 votes.

Moreover, Katie began a campaign to make online abuse a specific criminal offense. She took her campaign to Parliament in 2018.