Leeza Kim Gibbons a.k.a. Leeza Gibbons is an American popular talk show host. She is well recognized as a correspondent and co-host for Entertainment Tonight and for having her own syndicated daytime talk show, Leeza, which aired in 1993 and ended in 2000.

Who is Leeza Gibbons? Bio, Parents, and Education

Leeza Gibbons was born on March 26, 1957, in Hartsville, South Carolina. Her star sign is Aries. As per nationality, he is an American and belongs to the white ethnic background.

His mother, Jean, is a homemaker while her father, Carlos Gibbons, is a former state superintendent of education and antique shop owner. Gibbons was raised alongside his two siblings: Carlos Jr., and Cammy. Furthermore, her family also adopted a young chimpanzee from a traveling circus they named Martha.

Since 1976, Gibbons has been into the entertainment industry. In the initial phase of her career, she worked at WSPA-TV in South Carolina and at KFDM-TV, and WFAA-TV in Texas. In 1983, she relocated to the New York City where she joined WCBS-TV, where she co-hosted the Two on the Town with Robb Weller.

Not now….I have a headache! This is one of those pictures where I go ,”I look like my mother!” #hollywoodglamor

The following year, she became the host for the show, Entertainment Tonight alongside Robb Weller. In the meantime, she also hosted her own NBC’s daytime talk show, Leeza.

Not only this, but she also worked for the radio show, Blockbuster Top 25 Countdown with Leeza Gibbons, released her mineral makeup line, Sheer Cover Studio,  TV show Extra,  PBS’ show My Generation and America Now.

Currently, she serves as host for Hollywood Confidential.

Leeza Gibbons has been married four times. In 1980, she exchanged the wedding vows with John Hicks. However, the two separated in 1982.

Later seven years, she was married to British actor Christopher Quinten, with whom she has a daughter, Jordan Alexandra (Lexi) Gibbons. In 1991 they divorced.

That same year, she tied the knot with actor Stephen Meadows. The couple shared two sons, Troy and Nathan Daniel. Their relationship ended in 2005.

In 2011, she married Steven Fenton, in Beverly Hills. Her 4th husband, fenton, is a New York Times bestselling author, who the son of the former mayor of Beverly Hills, Frank M. Fenton.

Moreover, Gibbons is a member of Hollywood United Methodist Church, where she had all her children baptized.

Furthermore, Gibbons is active on Instagram with 36.3k followers as of June 2019.

How much is Leeza Gibbons Net Worth?

As of 2019, her net worth is $40 million, mostly earned through her broadcasting career. The exact figure of her salary is yet to be disclosed. Looking at his career, his salary is no less than the seven-digit figure.

Additionally, Leeza and her husband Steve Henton bought the lavish mansion in Beverly Hills worth $7.95 million in 2013. Situated on a 21,000 square foot lot, the main house is 6,600 square feet while the guest house is 2,300 square feet. 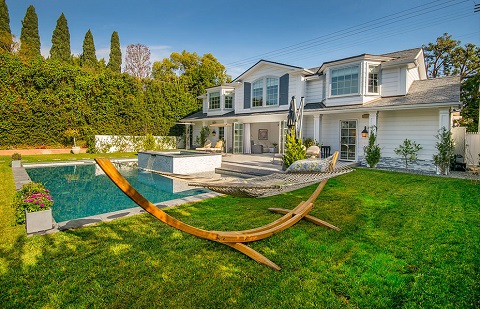 Furthermore, in November 2018, she purchased West Hollywood Bungalow and Guesthouse worth $1.94 million. The house covers 1,097 square feet and consists of 2 bedrooms, two bathrooms and 650-square-foot guesthouse with bath.

Michael Vick net worth in 2019, His Sources of Income