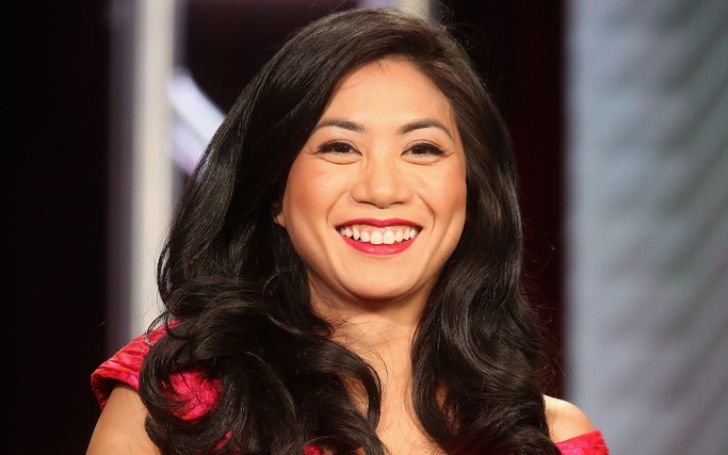 The prominent and amazing actress Liza Lapira is most recently seen starring in the movie The Fabulous Filipino Brothers as Teresa and the Tv series The Equalizer as Melody Mel Bayani.

Mel will be the former U.S. Air Force sniper turned owner of a bar that acts as a secret base of operations. Also, an old friend of Robyn’s from her service days.

=Liza Lapira is a film, television and theater actress who has appeared in numerous movies, Tv series and films.

Before appearing in The fabulous Filipino Brothers, the actress has starred in the Myriad Pictures film Modern Persuasion, which premiered at the 2020 Cannes Virtual Market.

Born and raised in Queens, New York, Liza Lapira is an amazing actress. Liza is best known for her roles in the 2008 film 21, Dollhouse, Traffic Light, Super Fun Night,9JKL. and many more.

Besides, she is an avid supporter of LA’s Best. It is an after-school service given to 28,000 children in 189 schools around Los Angeles.

In addition, the actress volunteers in the Children’s Hospital Los Angeles Charity Triathlon in Malibu.

Liza Lapira was born on December 3, 1981. She belongs to Spanish, Filipino and Chinese ancestry. Liza Lapira is 41 years old as of 2022.

Even though the actress is 41 years old, she doesn’t look like one.

She is stunningly beautiful, standing perfectly 1.57 m tall and weighing a substantial weight. Besides, the 1.57 m tall actress has glorious black eyes and wavy brown hair.

Is Liza Lapira married? Know about her relationship!

The Equalizer actress Liza Lapira is currently unmarried. However, she was reportedly involved with the handsome hunk, Sam Rockwell.

Liza Lapira’s relationship history might come as a surprise to some as her personal life is kept under wraps. At one point in her career, the actress was rumored to be with Sam Rockwell.

Unfortunately, both of them haven’t accepted or declined the rumors. The pair have since split as Sam has been in a relationship with actress Leslie Bibb since 2007.

Sam and Leslie Bibb met in Los Angeles while Sam was filming Frost/Nixon. Moreover, the pair appeared in Iron Man 2 and Don Verdean together. Until now, the lovely pair are staying strong, and there are no signs of breakup and splits.

On the other hand, the beautiful 41-year-old has not spilled the beans of her partners.

Besides, She an avid pet loves. Liza shares tons of pictures of her cute puppies.

Also, she had starring roles in 9JKL and Battle Creek. The actress also had recurring roles in Law & Order: SVU, ER, NCIS, Dollhouse, Dexter, and Huff.

Furthermore, Lapira’s film credits include Stupid, Crazy, Love,21, Fast & Furious, Paper Year, All I Wish, Someone Marry Barry. This amazing actress has had her hands-on stage, too; some of her stage credits include The School for Wives, As You Like It, Alexandra Cunningham’s No. 11 Blue and White. In addition, she played Suzanne in Steve Martin’s Picasso at the Lapin Agile at the Old Globe Theatre in San Diego recently.

How rich is Liza Lapira? Know her Networth!

The American actress Liza Lapira has an estimated networth around $3 million. She indeed lives a lavish life as she has accumulated large fortunes as an actress in the film industry.

Although Liza’s salary and income are yet to reveal, as per some sources, the average salary for an Actor / Actress is $50782 in America; as a result, actress Liza Lapira would be earning around the same amount or even more.

Moreover, Liza Lapira has been in the Film industry since 1999. She spans 23 years acting in various movies and Tv series. First, the actress acted on stage and in independent films in New York.

Her New York stage works are The Odyssey, The School for Wives, As You Like It and No. 11 Blue and White. Subsequently, she moved to Los Angeles and worked in television in 2004.

Continuing about her Networth,

Lapira first dived into films such as the 2005 action crime film Domino playing Chinegro woman. Then, she played in the 2006 American independent film The Big Bad Swim. Since then, the actress has appeared in eighteen films and thirty-seven TV series.

Furthermore, Liza Lapira featured as Liz in a 2011 American romantic comedy, Crazy, Stupid, Love. This film grossed over $142 million against its $50 million budget.

However, Parade Magazine listed the movie as the #7 on its Biggest Box Office Flops of 2010 in July 2010.

Liza Lapira starred Sophie Trinh in Fast & Furious 4 in 2009. This film was a smash hit. It grossed over $360 million worldwide, overturning the expectations to be the then-highest-grossing film in the franchise.

Also the 17th highest-grossing film of 2009. In the opening weekend, it grossed $70.9 million globally.

Above all, The best is yet to come from Liza Lapira!