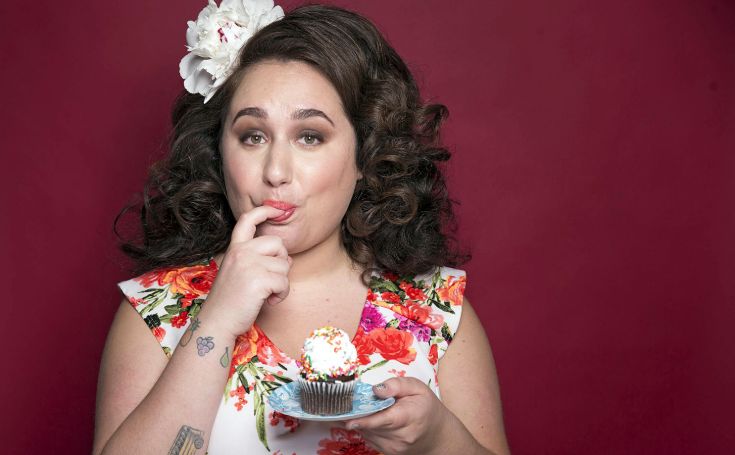 Liza Treyger is an American comedian, producer, and actress well known for having featured on Comedy Central, the Laugh Factory, Comedy Knockout, Horace and Pete, and Just for Laughs: All-Access.

Further, she is famous for her self-deprecating comedy and making heavy women feel more comfortable joking about their weight.

Moreover, Liza is a New York-based stand-up comic by way of Chicago and raised in Skokie!!!! Likewise, she has her own Comedy Central half-hour and album, Glittercheese and has appeared on

Stay Tuned with us to know more details about her personal and professional life.

Born on 31st August 1987 in Odesa, the port city in Ukraine in USSR, Liza originally belonged to a Jewish family from Ukraine.

Likewise, the star immigrated to Chicago, Illinois, when she was just three years of age, with her parents in 1990 from the Ukrainian port city of Odesa, which was once part of the Soviet Union.

After rolling, her whole family was granted religious asylum and other Jewish families. And they put up in Rogers Park but eventually settled in the northern suburb of Skokie.

Similarly, her mother seems fond of cooking and enjoys modern-day cooking inventions for her family.

Also, she has a married sister; her sister and brother-in-law watch her show most of the time. Additionally, the entertainer has a beautiful family who doesn’t believe in living a sugar-coated life.

In addition to this, the lady attended the Niles North High School. After finishing high school, she attended Iowa State University and Columbia College, Chicago, for a short period before transferring to North Park University.

The TV personality, Tryger began her comedy career when she was invited to perform in an open-mike program while studying at the NPU.

In 2017, she was appeared in TOP 10 COMICS TO WATCH, a list of the prestigious Variety. Since after that, Liza became a prominent performer and created a show based at this year’s Just for Laughs Festival in Montreal on her life in Chicago in her twenties.

In 2017, her half-hour Special for Comedy Central debuted, and just she was seen on her Netflix Half Hour Special: Degenerates.

Her lasting comedy show is In the Weeds, and it will be presenting an hour every night at Bistro Pl, Edinburgh 31st July to 26th August. As noted by Treyger, everyone can join this show to expect people who are not feminists.

An American Stand-up comedian, Treyger, is reportedly single at the moment. However, the entertainer likes to keep her personal life private or away from the media and rarely talks about it.

Back in 2012, the Comedian superstar once said about her mysterious boyfriend on Twitter.

Although the identity of her partner is still a mystery, they must have enjoyed their moments together. Even she disclosed her beau suggested she use news sites, Twitter,

“I just picked two things I liked and thought that Twitter would go away. But it didn’t, so it became a thing.”

Moreover, their relationship might have had quite a few funny moments, given that the gorgeous lady is a comedian.

The star even joked about watching A Good Day To Die for Valentine’s Day only so she could hit her boyfriend in the face and not be in the wrong.

Due to her secretive nature, Treyger always keeps her partner’s details confidential; the lady just gave hints to her fans but never revealed anything.

Subsequently, they secretly broke up as she began hinting at her single status through her Twitter posts.

Whether the performer is single or taken is still behind the doors. But Liza might have plans to marry sometime in the future and make her wedding vows with her husband.

But, for now, she has not been caught in any dating rumors, although the girl might reveal it through her funny Twitter posts herself.

As a skillful comedian, her fans and followers assume that possibly no moments spent with her would go without a smile and a big laugh.

Liza has millions of fans worldwide as a public figure, but the comedian never wrong uses her fame. The stunning performer is always down to earth and shares a friendly equation with everyone, especially her girlfriends.

Observing her Instagram page, most of the posts are dedicated to her friends, either partying or having fun with them. Most importantly, she never misses praising them plus expresses their importance in her life.

What Net Worth Does Liza Makes?

Liza has been working as a comedian for the past six years. Treyger amassed many fans and accumulated a decent fortune via her successful career.

As per some online tabloids, Liza has a net value of around $4 Million, same as comedians Mary Mack.

On the other side, in the United States Of American, stand-up comedians make roughly $30,000 to $700,000 per year. Nevertheless, considering her career graph, her wage is higher than the average.

Hence, there is no denying that the famous comedian relishes a lavish lifestyle on her own.

Don’t Forget To Visit AllStarBio, For Your Favorite Celebrities Biographies!!!