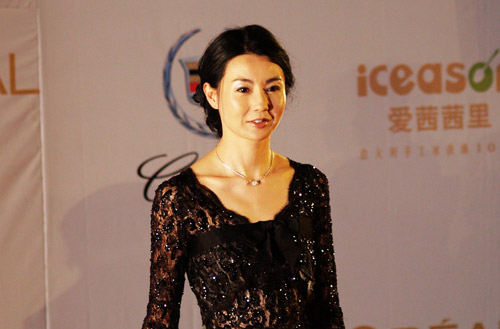 Maggie Cheung Man-yuk is an actress based on Hongkong. Cheung started her career in 1984 and continued to act till 2004. After that, she took a gap for six years and resumed her career again in 2010. Maggie is credited for movies like Song of Exile, Center Stage, Comrades: Almost a Love Story, In the Mood for Love, and many more.

Cheung was married to director Oliver Assayas in 1998 but divorced after 3 years. This 5 feet 5-inch actress made over 80 films and made a fortune for her. Let’s find out more about Maggie’s net worth and movies below.

Who is Maggie Cheung? Her Bio and Age

Maggie Cheung was born on September 20, 1964, in HongKong. Her parents moved from Shanghai to HongKong. This 54-years-old actress is of Virgo zodiac sign. There is not much information about her parents and siblings. Maggie moved to the United Kingdom at the age of eight.

While at the HongKong, Maggie went to St. Paul’s Primary Catholic School. Cheung grew up in Kent, England and returned to Hongkong at the age of 18. She stayed in HongKong and started her modeling career there itself. Cheung has a diversified view of the world because of her stay in HongKong, Britain, and Paris during her childhood.

Cheung started modeling in HongKong and at the same time also working in Lane Crawford Department Store. After that, Cheung participates in Miss Hong Kong Pageant in 1983 and became the first runner-up. Later, Maggie joined as a TV Presenter at TVB. Maggie decided to join an acting career and started in comedy roles.

Jackie Chan saw her and cast her in the movie Police Story in 1985. Maggie did not want to get typecast as comic relief in movies and acted in a drama movie As Tears Go By. The movie was directed by Wong Kar-Wai in 1988. She won Best Actress award at Golden Horse Award and HongKong Film Award in 1989 for Full Moon in New York and A Fishy Story.

Cheung married French director Oliver Assayas in 1998. They met and immediately fell for each other. The couple tied the knot but their love did not last long as Maggie and Oliver separated three years later in 2001. They do not have any children together.

After six years, Maggie found love again in 2007 in German Architect Ole Scheeren. They started dating and got into the relationship but never married. Their relationship also did not last long as the couple separated in 2011. They also do not share any children together.

Currently, Maggie is single and focused on Philanthropy work. Maggie became the UNICEF’s Ambassador to China in April 2010 and also received the doctor honoris causa at the University of Edinburgh in July 2011. She also uses her celebrity status to provide endorsement for Mandarin Oriental Hotel Group.

What is Maggie Cheung’s Net Worth?

The estimated net worth of Maggie Cheung is at $80 million. Maggie is a terrific hard-working actress who has credit for over 80 films in her name. Cheung currently works as a music composer in films.